Adventure games by Saturn Plus

We get a small commission from any books sold.
All Bitmap Books
Written by
Tom King — February 8, 2004

When it comes to adventure games, I just can’t get enough of not knowing who I am, where I’m at, and what I’m doing there. There’s nothing like a little atmospheric amnesia to move the wary sufferer deep into the bowels of the unknown to solve his own riddle. As a gamer, I can find few things more appealing than working through a complex, well-paced story in such a way.

As cliché as it is, what makes this such a reliable approach is the amount of latitude it lends the narrative – as long as it’s tied together in the middle, or the end; or somewhere along the way. So it’s no surprise that this plot device is used to jumpstart the horror-themed adventure Midnight Nowhere, created by the Russian developers at Saturn+ (the same folks who treated us to the less than stellar Jazz & Faust), and published by Buka Entertainment.

A brief and terrifyingly apocalyptic introduction starts our mystery off, during which a narrator describes the apparent gruesome works of a prolific serial killer. A few brief scenes indicate an epidemic in fear, which results in a mass exodus from the city of Black Lake. 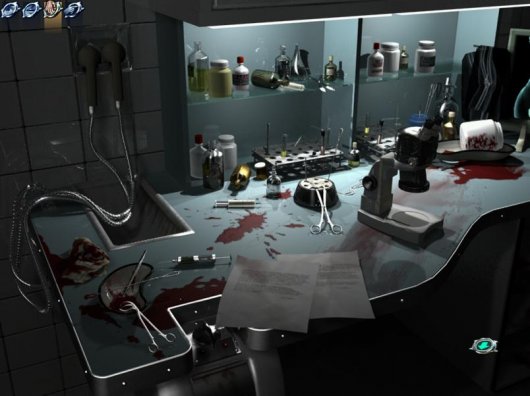 You awaken in the mortuary of a hospital, unzip the body bag you’ve been napping in, and emerge to a scene of grisly violence. Sure, you would expect to see the dearly departed in a mortuary, but it appears an eviscerated attending staff has recently joined them. Thus is set into motion your mission to find out what happened and how it relates to your amnesia.

For the purpose of keeping our mystery intact, I’ll skirt around the details of the plot of this game, and focus more on the mechanics. I’ll make the blanket statement now that the plot, though cliché, has an intriguing flavor that lovers of horror/suspense/psychological thrillers will definitely enjoy.

The main menu is the face of a digital watch, where you can load from an unlimited amount of saves, and other game options. If you have an older graphics card, MN allows you to de-select shadows, music, and other resource-heavy attributes. An active cursor tells you when you can look, speak, take, or take action – or allows you to select any one of these from the small, ever-present menu at the top left of your screen. Selecting an option other than the default will sometimes elicit a different reaction. A right-click of the mouse brings up inventory from which you can interact with using any of the four options mentioned. These options present a sort of puzzle of their own at times, for reasons I’ll mention later. 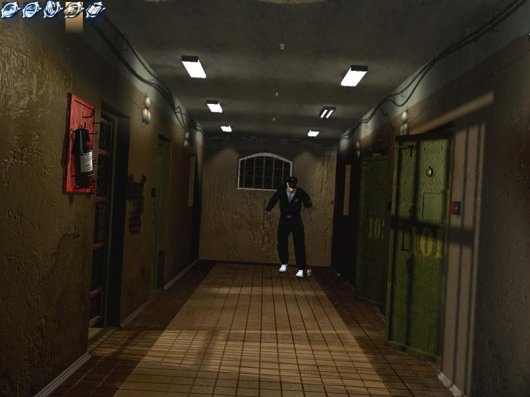 The dialogue in MN is quite a departure from what you might expect in a setting like this. The voice acting was satisfactory, as I imagine it would be easy enough to follow the directorial request to be an ass -- quite frankly, I thought the protagonist was a chauvinistic jerk with as little moral compunction as the purported serial killer. Most of his comments are delivered with the tact of a dull scalpel. I found nothing about him with which I could relate – never a good thing for the player character.

Yet his acerbically wry monologue eventually grew on me, and within the game’s setting and atmosphere, it’s at times a rather funny peccadillo. It never seemed appropriate however, and felt more like self-sabotage, like one of those movies that try to be sophisticated by being stupid: “Look at how smart I really am because I’m making fun of everything, including myself.” This tough-guy bravado will either alienate you, or grow on you, but it’s definitely different from the typical good-guy roles such as Guybrush Threepwood or George Stobbart.

Visually, the game is very appealing. All the backgrounds and environments are 2D pre-rendered and are incredibly detailed. Most scenes are cold and clinical but there’s enough of a contrast in the two primary areas of exploration that you’re not tiled to death. The feel of MN sort of reminded me of the old game D, back when polygons still wore diapers. 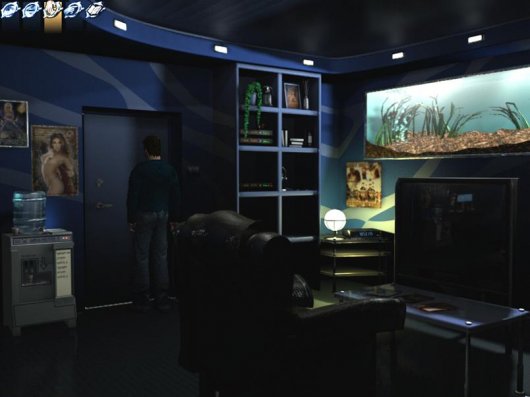 MN’s protagonist and few supporting characters are rendered in full 3D and look decent enough. Character animations are acceptable, but a little more work could have made them look more natural. The protagonist changes direction with the formality of a military about-face, and opening doors and picking up inventory items are a little too robotic as well.

Atmosphere is the ace-in-the-hole for a game like this, and MN is nothing if not atmospheric. One of the defining moments in the game is when you escape the mortuary only to find more of the same beyond: bloodstained floors and walls, and corpses framing a violent tableau here and there.

This game is certainly not for children, as there is quite a bit of gore, and some frontal nudity; a kind of incongruity in its own right, adding to the strange climate that is MN. You certainly wouldn’t expect to see pornography on the walls of a hospital’s employee lounge or offices, and their presence is never fully explained. 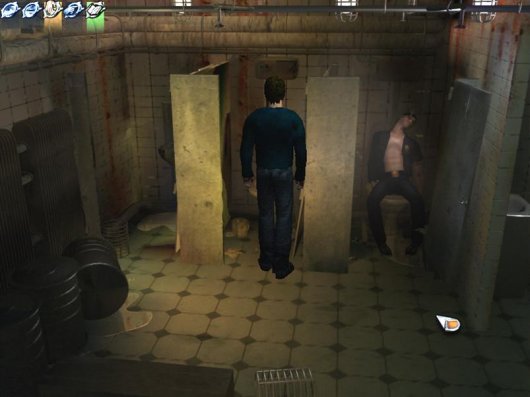 The music of MN is a muted, synthesized layer, the type of effect most often used to build tension and a kind of refrained terror in horror movies. It’s used effectively, but the one thing that I appreciated most was the frequency of its use. Most often, silence is the best promoter for eerie, and MN recognizes this.

For back story, MN relies on letters, notes, some video feed, some computer use, and odd scribbles here and there at even odder places, so be sure to investigate everything you see. To be sure, some areas are so cluttered with such fine detail, it’s a trifle disappointing that it’s just prop. You’ll likely want to crank up the contrast on your monitor, as most of the game takes place in an understandably dark setting. Otherwise, you’re bound to miss something hiding in a corner.

For whatever reason, certain effort was put into the bizarre advertisements lining the walls and halls of the hospital, to allow you a close up view of someone’s idea of a joke. Think MAD Magazine without the funny and you’re pretty close. I have a weird sense of humor, but at times even I was lost. I can only guess that in tandem with the storyline, the developers were going for shock value. Perhaps some of it is literally lost in translation from Russian to English, but only conceptually so. There are even times when the protagonist’s comments make little sense, but not because of a language barrier. I found myself understanding everything I read and everything that what was said well enough, but often wondering what was meant. 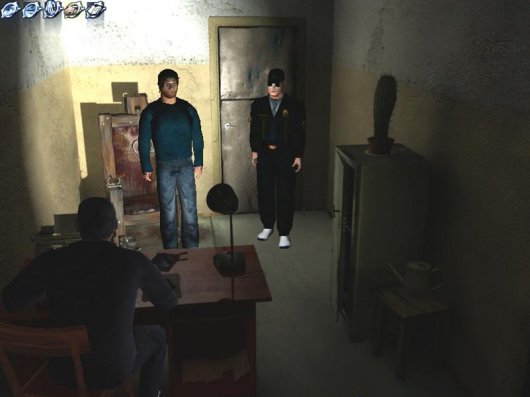 Then there’s the odd mix of puzzles in MN, and this is where I had the toughest time reconciling the amazing difference in difficulty. The mortuary itself represents a tutorial of sorts, in that everything you need to do is relatively simply, slot A and slot B-type inventory combining and usage that all adventure gamers are familiar with. Yet there are often problems with combining or using inventory items. I’ll just say there’s a sequence with which inventory items first have to be selected, and then combined for them to work, lest you stand there scratching your head too long in the company of the dead.

The puzzle killer rears its ugly head all too often, when action that flies in the face of logic is necessary to move forward. There are quite a few non-taxing “find the key to open the door puzzles” that help progress your movement, but there are also a fair bit of odd-combination puzzles that will have you selecting everything you’ve picked up in inventory to find out exactly what combination is needed and what the heck you’re supposed to do to get it to work. What makes this even more confusing is that it doesn’t fall in line with the precedent set when you’re in the mortuary. This type of inconsistency leads you to believe that everything is going to make real-world sense.

I found this too tedious and frustrating a puzzle structure to even motivate me at times, so saving the game and coming back at a later time is inevitable with this game -- and that’s a shame, as the continuity and tension suffer as a result, and the frustration only enables the extension of what should be a 20-25 hour adventure. 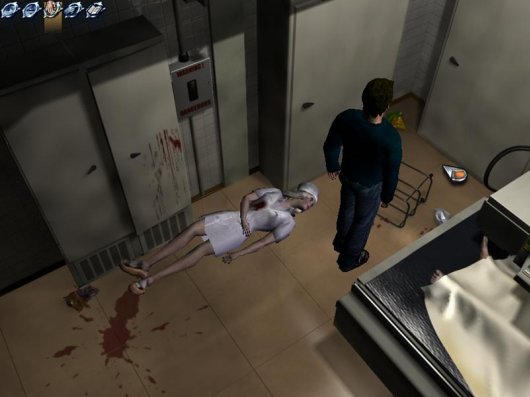 I certainly felt challenged and intrigued by MN, and I enjoyed the progression of the story. But I can find no reason that I would ever want to keep it on my HD or load it up again to watch a particularly captivating sequence or play through a cleverly designed puzzle, as there really aren’t any of either.

In the end, Midnight Nowhere features too much use of illogical puzzles and what felt like a forced reliance on purely adult imagery with barely a ghost of reason to rate very high on any “must-have” list. The story is rather compelling though, with an ending that provides just enough of a twist that, if you can stand picking the seeds out, makes a decent enough glass of lemonade.

Tom King is based on a true story.

The puzzle structure, iffy dialogue, and subject matter make this a hard recommendation to a general audience. As the score indicates, unless you’re a hardcore horror/adventure fan, it might be wise to first play the demo, or await a price-drop.

GAME INFO Midnight Nowhere is an adventure game by Saturn Plus released in 2003 for PC. It has a Comic cartoon style and is played in a Third-Person perspective.

What our readers think of Midnight Nowhere