We get a small commission from any books sold.
All Bitmap Books
Written by
Claire Wood — January 30, 2003

NOTE: This review is based upon the enhanced ‘talkie’ CD-ROM version.

As Loom opens, it’s the dawn of Bobbin’s 17th year! Hurrah, a birthday! Summoned to meet the patriarchal elders, Bobbin, in the typical fashion of all eavesdroppers, fails to hear anything good about himself, instead discovering he is to be banished from the Island. Suddenly a ‘draft’ or spell rebounds upon them, bizarrely turning the entire community into swans! In typical adventure gaming fashion, he must now begin a direful quest to save his Guild and prevent an evil Third Shadow falling. Hmmm—seems Bobbin had best put the jelly and ice cream on hold...

The world encompassing Loom is based upon a land in which a series of Guilds flourish, each highly specialised in their particular skill. Throughout the adventure, Bobbin will meet members of the Weavers, the Glassmakers, the Shepherds, the Blacksmiths and the Clerics. The Weavers are a Guild that once wove cloth, but developed the knowledge to weave the very fabric of life. During the course of the game our hero, Bobbin Threadbare (if you’re thinking this name is clichéd, wait until you meet the dubiously titled Rusty Nailbender) encounters members of these different Guilds, both good and evil. 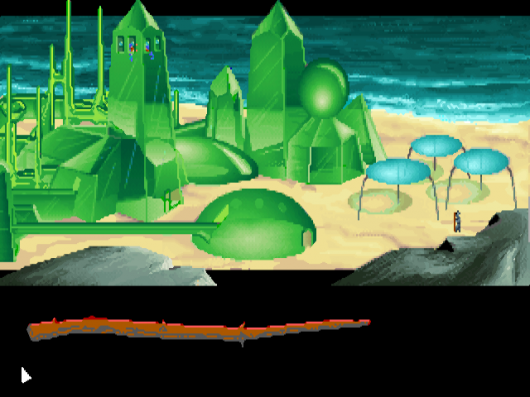 The story line is particularly compelling and is arguably the game’s best feature. Immersion is a key factor, created by a relatively short average playing time (the experienced gamer could complete this game in a single sitting of less than five hours) and a fast paced plot, making Loom a potent and intense gaming experience. The minor characters may lack depth, being generally clichéd and fixed within stereotypes befitting their Guilds; yet our central protagonist is a triumph, sensitively portrayed as a boy dealing with an adult problem in typical coming-of-age style. As the seemingly hopeless underdog, we empathize with the social stigmatism he suffers among the Weavers, whilst cheering at his final triumphs. This type of fantasy world immediately appealed to my imagination and curiosity. Furthermore, the unexpected, bittersweet ending presents a twist on the usual fairytale formula.

Loom differs from other LucasArts games, such as The Secret of Monkey Island. While it is still in essence a third-person point & click adventure, there is no inventory to collect, with your interface based solely upon interaction with your distaff. For the more uncouth among us, that’s a stick, albeit a magical stick that can be used to weave ‘drafts’ or spells to aid your quest. When interacting with objects in your environment, sequences of four "threads" (musical notes) play and should be noted down for future use (it is recommended to take notes throughout the game.) When you begin, you have access to few threads, though as the game progresses, you are rewarded with higher threads that make you capable of weaving even more complex spells. This type of interface can be keyboard or mouse activated and proved extremely simple to use, though having no inventory and only a set amount of drafts limited the scope and variety of the puzzles, shortening the overall playing time.

The puzzles and challenges in Loom are logical and depend more on careful listening to decipher the four threads of each draft than lateral thinking. This is a property that makes it ideal for gamers new to the genre. A fully illustrated "Book of Patterns" that describes the history and purpose of each draft further aids the gamer. One particularly charming innovation is the interaction Bobbin has with his environment--a certain level of interaction is necessary to learn the drafts that will be used later, but other actions serve little practical function, except for adding a level of believability, and giving the player greater freedom to explore the world of an otherwise linear game. 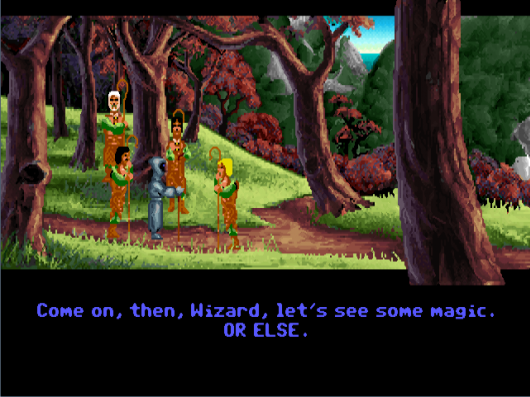 The level of difficulty is adjustable, affecting the amount of help given when using the distaff, rather than the inclusion of extra puzzles. In practice mode, the musical notes will appear underneath the distaff, whereas in standard mode the area of the distaff corresponding to the musical note glows. In expert mode, no help is given, and drafts must be transcribed by ear. I would recommend to any experienced player, or someone with musical knowledge to play at either standard or expert level, to extend the games playing time. Unfortunately, tone deafness is likely to pose significant problems in this latter mode.

The music in Loom does not play throughout, but is limited to key moments, heightening the dramatic tension. When it occurs, it is a real treat, ambient and well-suited to the tone and atmosphere of the game. It draws upon pieces by Tchaikovsky, and even I (hardly a classical music connoisseur) appreciated the score in such a context. The voice acting was generally average, except for a disappointing performance by Richard Seyd, the voice behind Bobbin Threadbare, who created a whining and slightly pathetic figure, as opposed to an individual teetering on the brink of maturity, struggling bravely through his quest.

As an older game, it might be expected that Loom would cause problems on a newer system. Fortunately, I have never experienced a single crash or system lock-up when playing Loom in DOS, Windows 95 and Windows 98. Loom is refreshingly devoid of technical issues. 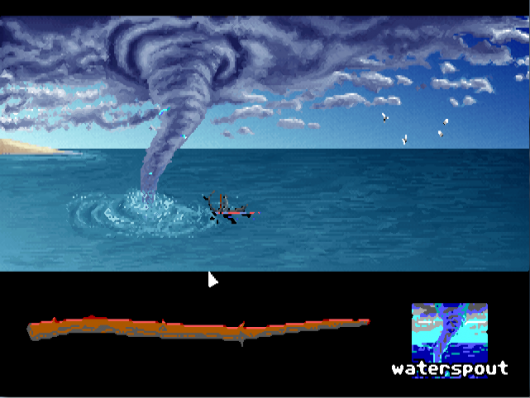 Unfortunately, the game's length is its fatal flaw, as many will feel that despite all of Loom's inherent good qualities, it is too insubstantial to get your money's worth. Although the drafts alter every time you start a new game, this fails to add any real replayability and may leave experienced gamers feeling Loom is over before it even began. At £5 this game was a gem—at anything more it might be a rip-off.

In conclusion, if you have a free afternoon, I would recommend you play this game. For novice adventurers it presents a gentle learning curve. For experienced gamers, it will be fun while it lasts! Becoming a believable, ordinary character in an extraordinary fantasy world is surely escapism at its very best.

A rewarding and enjoyable gaming experience. While it lasts, that is.

GAME INFO Loom is an adventure game by LucasArts released in 1990 for Mac, PC and Retro. It has a Comic cartoon style and is played in a Third-Person perspective. You can download Loom from: We get a small commission from any game you buy through these links.
The Good:
The Bad:
The Good:
The Bad:

What our readers think of Loom

a question of version

It's the japanese FM Towns version ( also in english ) you should play. That's the five star version. If you bought Loom from Steam it's free to download. ScummVM does the job. Read the review »

Loom is a Very Good Retro Game, Only Complaint is it is Short and Some of Voice Acting Wasn't Best

First off, this games story is very good and it has great music throughout. The story is interesting in that the main character has to learn notes to be able to play spells as he... Read the review »

this adventure released in 1990 was one i never got to play when i was younger. it was fun to play it now. a nicely built—albeit rather short—fantasy story. the main difference with this game... Read the review »