We get a small commission from any books sold.
All Bitmap Books
Written by
Former Staff — March 6, 2003

(Note: This is a reprint of a review that was posted on AdventureGamer.com two years ago. It has been left in its original form. We do not know how to contact the author.)

Spycraft is an extremely original title. It is the title that drew me to the game in the first place. It revolves around the use of tools based on genuine CIA equipment (though no doubt somewhat dumbed-down for the small screen). There are not really any puzzles in the usual sense: this game is about discovery, unravelling a conspiracy or two using tiny pieces of evidence, and keeping your eyes and ears open. This part is very well done in that the amount of information available to you is quite huge, though you will only need a small amount in the end, making the task of sifting through it all challenging. The interface by which you make your discoveries is very simple to get to grips with, though the game screen is a bit small, with a load of unused blackness around it. Most of the time you'll be logging onto your computer and using your tools, each with a nice intuitive interface, but there are a few set-piece shooting scenes, and lots of conversation with various characters. It's a funny feeling not knowing who to trust, because death is possible in the game (though usually not sudden and undeserved). You always have to be on the lookout for clues in what people say and even do a little bit of snooping around. 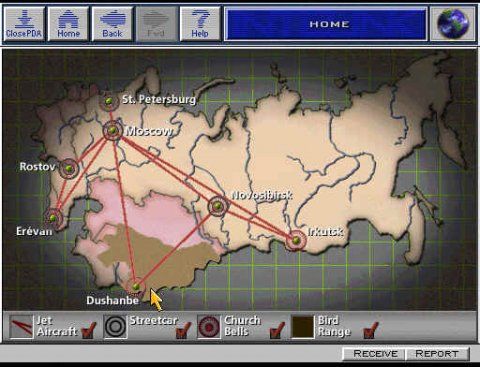 The spying tools I speak of are wide ranging. You get to analyze photos, trace credit cards, doctor photos to get captives to talk, analyze sound recordings to track people down, and—get this—if you complete the game of Mah-jongg that arrives on your desk you get an extra clue! One of the great things about Spycraft is that there are more clues lying about than you’ll actually need, and occasionally more than one way of reaching the same conclusion. However, the more clues you find, the easier it is to progress. These little touches and many more tools are lovely, but I would have loved more of each, it seems that most are only used once. For example, you only get to use photo doctoring once. Though the game is on 3 CDs, it does not take long to complete, and it seems like each tool could have been used a little more, as they are done with before you really want them to be.

The plot of the game has enough twists to keep you interested, but it is here where my confusion begins. You see, I distinctly remember really enjoying this game the first time I played it...but each subsequent time, it has become increasingly mediocre. I am sure it must be because the game is so unique that when you go back to it, unlike many other replayable adventures, the thrill of discovery is lost. It no longer seems like you're uncovering a conspiracy. The FMV sequences, which are well enough acted, no longer surprise you. Because so much of the game is shrouded in mystery, when the mystery is lost, the next time you play, there doesn’t really seem to be any motivation to go on, save maybe to try those spy tools again. I know for sure that this is a very good game indeed. I can see design elements and clever touches that are very well thought out, a pleasantness in the sub-plots and non-linearity of the game. These are the sorts of things we want to see in conventional adventures, to add a new dimension. But, unfortunately I feel that this is a game that everyone should play once. Once and no more.

GAME INFO Spycraft: The Great Game is an adventure game by Activision released in 1996 for Mac and PC. It has a Live Action, Photographic style, presented in Full motion video, Slideshow and is played in a First-Person perspective. You can download Spycraft: The Great Game from: We get a small commission from any game you buy through these links.
The Good:
The Bad:
The Good:
The Bad:

What our readers think of Spycraft

This game is the source of my screenname. I was trying to work through it about 20 years ago when I first picked a screenname and the main character's name, Thorn, seemed cool name. But... Read the review »