We get a small commission from any books sold.
All Bitmap Books
Written by
Cathlyn Vania — January 25, 2021

Sometimes memories, especially the painful ones, are best left behind us as we move on and look to the future. But in LOVE: A Puzzle Box Filled with Stories, we’re given a chance to actually go back to the past and help the residents of one particular apartment building reconnect with their loved ones, find peace, and live the lives they always meant to live, largely by rotating their floors. This is a heartwarming story-driven game with unique mechanics that, despite some interface issues that make it less user-friendly than it should be, manages to offer a welcome dose of comfort and satisfaction in the end.

Just like its subtitle suggests, LOVE is quite literally a puzzle box filled with stories. At its heart it is a point-and click-adventure with clues and objects spread out across the building, but here they are accessed in a most unusual manner. Imagine rotating a Rubik’s Cube clockwise and counterclockwise, but with people living in each of its squares: a lonely man with an urn, a woman who used to paint, a kid with a broken boombox, to mention just a few. Half the building exists in the past and half in the present at all times, separated by an obvious dividing line. Each floor of the apartment can be rotated towards the past, where everything fades to black and white, and rotated back to the present where the environment is full of colour again. You can also click and drag your mouse to move the camera left and right or up and down the building.

Whenever a new puzzle begins, any room with a camera icon will highlight to let you know that it can be accessed. When you click the corner of an outer wall in active rooms, the whole wall will delightfully crumble to reveal the space inside. There are far fewer hotspots than in a typical adventure, though occasionally you can direct the residents’ movement by directly clicking them, then clicking a designated teleportation spot to trigger another scene, or an object you wish them to interact with, such as having someone look at a highlighted photograph. 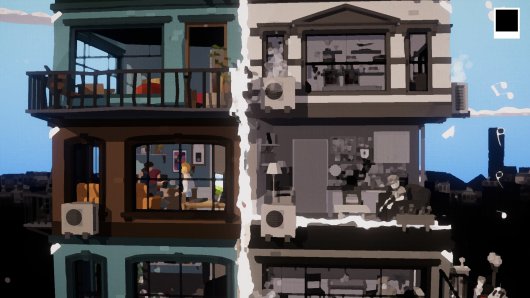 Illustrated in stylized low-poly graphics, each home in the apartment comes alive with abundant details: messy beds, telescopes, childhood photos, personal trinkets, and much more, each giving us a glimpse into the life lived by its owner. In fact, peering into their rooms is one of the only storytelling clues to understand their stories, in the absence of any text narration or dialog.

That’s not to say the game is silent, however. From the opening loading screen I was hooked by the soothing acoustic guitar songs from the album Caught in the Headlights by Neil White. It was like stepping into an indie movie, and throughout the game the score seemed to change and adjust according to which phase of the story I was in. Whenever it felt like I was nearing the end of a particular story, the music would change to something more dramatic, then change again to something calmer when moving on to begin another.

Your main task is to complete a photo album containing pictures of the residents at different points in their lives. Every story begins with a photo (or several), either in the past or the present, and it’s up to you to find its counterpart, so if a photo from the past is provided, you have to find the present version of it, and vice versa. For example, when you rotate a particular man’s room in the present, you’ll see that in the past he was the kid with the broken boombox, and thus you’re presented with the problem of how to get the boombox working for him. 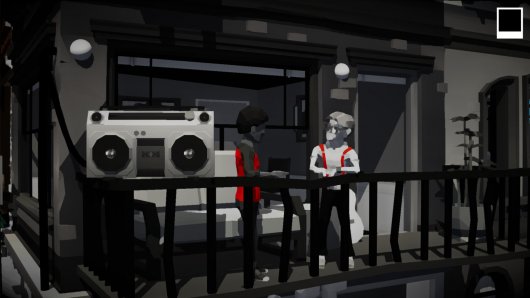 At any given time, two or three stories can be active, which can be jumped between at will. A story may consist of four, six or eight photos, and one by one as each photo is collected, you’ll gradually get to see a portion of the tale revealed, as the photos come to life through animation, until everything is done and that puzzle sequence is marked as complete. Then a new set of stories will be unlocked, and so on. I ended up jumping from puzzle to puzzle, attempting to solve several simultaneously as I scanned the building for clues.

It is cool how you can lead a resident upstairs by rotating the floors to align stairs, or how certain objects can impact another resident on a different floor if you know where to click or how to align the two together. It’s difficult to give examples without spoilers, but objectives involve things like finding a way to make the sound of music reach another floor, or getting a radio to work by finding an available power source. In this way, it’s interesting to see the various parts of the building combine to form a cohesive narrative whole. We may live separate lives, but our stories are all physically intertwined even if we don't know it, especially when we’re so closely connected to our neighbors.

What I found needlessly challenging was that identifying necessary clues often requires blind guesswork, as there is no indicator to suggest possible interaction when hovering the cursor over objects or characters. The only way to know for sure is by clicking on things until you locate someone or something that glows to show it’s been selected, then clicking again to trigger a reaction. This can get quite tedious at times, especially when you have no idea how to progress. If you click a character and they shake their head, it means you don’t have all the components yet for the story to progress. If you’ve fulfilled the requirements, clicking that person should advance the story through a kind of movie montage showing what comes next. Time passes by and you see their life change bit by bit according to the decisions they’ve made as a result of your influence. The new scene then gets automatically added to the photo album. 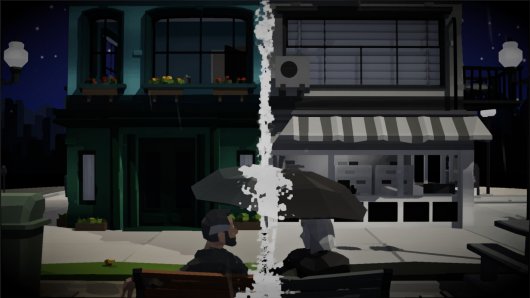 Ostensibly you are at this apartment to change the fates of its residents, and indeed their lives did turn out for the better after I helped align each person’s past with their present, but it felt like I was there to simply connect the pieces – everything was already ‘written in the stars,’ so to speak. While you can shift focus between different people’s active stories at any given time, each individual narrative has a linear route, so there is really no way to go other than following the hints and clues laid out. And yet the anticipation to see how things would play out was ample motivation to reach new photo solutions one by one to see the bigger picture.

It took me around four hours or so to finish all the residents’ tales, and getting to the end of each one and seeing each photo album come together was always satisfying. You’ll witness all kinds of love: romantic love, lost love, paternal love, and self-love, among other types, and to a certain extent you’re free to interpret what happened to those involved, since there’s no text to define their stories. You aren’t even given their names, only left with their visual identifiers: man with the beard, kid with the estranged father, girl with the red beret, and so on. But through these photos of important moments in their lives, you’re able to imagine what kind of upbringing they had, the things they found and lost, and what they had to deal with to get to where they are right now.

LOVE: A Puzzle Box Filled with Stories is a reminder of the many ways love can find us, even when we don’t feel it in our lives, and it is sure to leave you with a heartwarming feeling. It’s also a refreshing experience to weave silent narratives together through such a unique mechanic, even if some of the particular means of interaction aren’t nearly as intuitive as they could be. This game is unlike any other I’ve played, and with its bite-sized stories, beautiful soundtrack and innovative presentation, it’s one I can easily recommend for anyone looking for something a little different. Give it a try: you just might love it.

Despite some notable interface limitations, the unique LOVE: A Puzzle Box Filled with Stories succeeds in delivering an interwoven anthology of heartwarming personal tales in the style of an apartment-sized Rubik’s Cube.