In the horror genre, there is no more classic an idea than the haunted house. And for good reason, as a spooky, run-down house is an ideal location for adventure, exploration, and the occasional ghost or monster popping out to torment you and chase you around. Deeproot Manor makes good use of this tried and true conceit by blending fresh new ideas with a retro design that represents a throwback to a nostalgic period of adventure gaming.

Deeproot Manor is largely a one-person effort, created by Fuoco Fatuo using RPG Maker. As such, it has a very classic SNES-era look and feel to it, though it’s far darker than its inspirations. This is a top-down, free-roaming 2D game with simple pixel graphics in which you walk around via keyboard or gamepad and interact with hotspots, calling up your inventory of acquired objects where necessary. There is no verb list at the bottom of your screen. You can't point and click on items in the environment (though you do use the mouse in certain self-contained puzzle sequences). But don't let the design and basic mechanics fool you: this game is a graphic adventure through and through.

It begins with the protagonist, Emily, discovering that her younger brother Richard has gone missing. She recalls him discussing a strange mansion in the woods, so she tracks him down to a dark, overgrown manor called Deeproot. Her only goal is to get inside, find Richard, and get him out. As you can imagine, this becomes somewhat complicated as you begin to explore the house and discover its secrets. 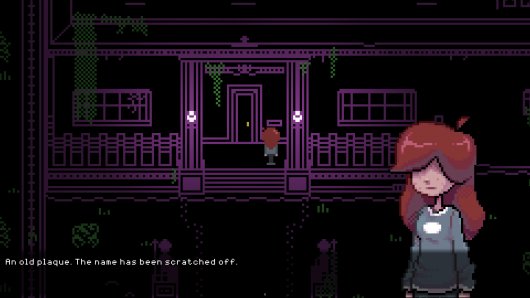 In attempting to navigate the dilapidated manor, you’ll find your progress halted by locked doors, collapsed floors, impenetrable darkness, and impossibly large roots. The game is centered around solving puzzles, finding keys, and using your wits to pass through or circumnavigate these obstacles in your quest to find your brother and discover the multiple unique endings. As you progress, the mansion's many supernatural mysteries open up to you. You will encounter ghosts, haunted dolls, witches, secret passages, and – most importantly – a collection of cursed plant life that has not only swallowed up the building, but seems intent on swallowing you up as well.

I really enjoyed my time wandering Deeproot Manor. The puzzles are all very logical but truly challenging. While I found myself getting frustrated with the running theme of every door being locked, the experience is chock-full of the sorts of moments most adventures strive for – that “Ah-ha!” thrill of trying an idea that pops into your head and feeling like the smartest person on Earth when it works. The game is spectacularly clever in this way. Many times I would brush up against the feeling that a puzzle wasn't being fair, but in every instance it turned out that I just hadn't thought it through from every angle or found every clue.

A good chunk of the puzzles are solved by finding objects and using them in slightly abstract ways, but there are many self-contained logic puzzles that I banged my head against for a while. There is one particular puzzle where you must play a certain tune on a piano to open a box. To find the order in which to play the keys, you have to study a clue found elsewhere and interpret an incredibly cryptic set of instructions. It was one of those brainteasers where I had to turn off the game, clear my head, and return to it an hour or so later. When I finally got it, I startled my household by yelping with delight. 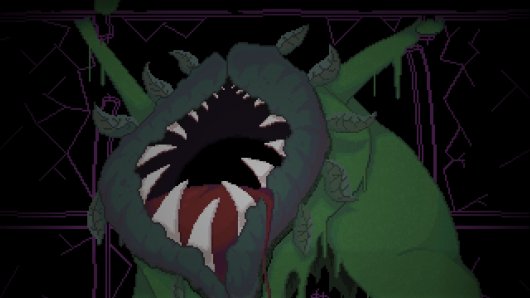 The one thing that did frustrate me, however, is the monster that appears at unexpected moments to chase you. The creature is slightly faster than Emily, and if it catches you, you're done, forced to go back and reload a save. Since you can’t outrun it, these chase sequences require finding a way to outmaneuver and escape the monster, which I very much enjoyed. Every area where it appears has at least one escape route or hiding place that provide safety, and discovering them is fun. But there were a number of times when I had just solved some major puzzle and was excitedly hurrying to the next spot when BAM! Monster attack! And suddenly I had to load a save from five to ten minutes prior. (While saving is manual, it too is old-school in that can only be done in certain locations.) The existence of this threat is helpful in creating a tense, scary atmosphere, but punishing deaths in adventure games is one of my personal pet peeves. Especially because in certain cases here, I just don't know how you'd avoid the monster if you didn't already know it was about to appear. This was, fortunately, one of very few disappointments I had with Deeproot Manor.

The game recommends that you play with headphones on and the lights off. While headphones definitely add to the experience, playing with the lights off is almost essential because the color palette is so dark. The largely deep purple pixel art against a black background should be easy enough to see, but dynamic lighting is employed here. When you are near a lamp, the background scenery glows in the darkness, but as you move away from the light, the images fade to a dull, almost indiscernible hue. This has the effect of establishing an eerie and mysterious atmosphere, but it also makes certain things incredibly hard to see. Trying to play in a room with any amount of daylight is practically an exercise in futility. The one time I made that mistake, I found myself leaning in and shielding my eyes from the light in my room to see the dark shapes on my screen before giving up and coming back to try again in the evening.

Compounding the issue, the game's graphics contain a very low level of detail that is often pretty unclear. They hearken back to the days of simple 16-color graphics from the late 1980s, and as such, many items and backgrounds are hard to make out. Deeproot Manor remains committed to this retro aesthetic even when it handicaps the visual clarity. Each room is packed to the gills with things to examine, but an interesting object on a bookshelf can be hard to discern from a stack of books, or an end table can be hard to tell apart from a bit of rubble on the floor. The most important objects largely stand out by being rendered in bright white, yellow, grey or green, but if you're interested in uncovering the game's secrets, you'll need to get used to walking up to indistinct blobs of purple, hitting the space bar, and discovering that it's nothing whatsoever when no dialogue is triggered. 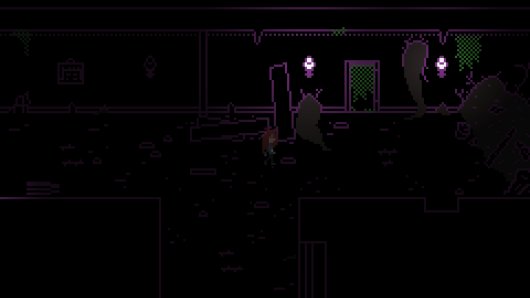 Both of these artistic choices – the dynamically it, low-res graphics and the dark color palette – are effective in creating a distinctive retro-inspired atmosphere. But as a player, they can be as challenging to deal with as they are pleasing to look at. For that reason, I'm not sure I'd consider either a misstep so much as warnings to potential players that you'll be sacrificing some ease-of-play for mood.

While not as necessary as playing in the dark, using headphones is another recommendation I strongly echo. The sound design is thoughtful at every turn: the music is kept to a minimum, so you spend most of the time surrounded only by the creaks and groans of the mansion, as well as the patter of your own footsteps. The latter is noteworthy in that the sound effects have your footfall landing at irregular intervals, rather than a standard pattern. It’s a subtle detail, but it helps create an unsettling feeling throughout the game. When you hear a thump or a growl off in the distance, you're instantly set to high alert, and the game's fairly regular jump-scares are all the much more effective because of it. The heavy emphasis on silence also makes the few spooky ambient synthesized songs feel much more tense and effective when they do play.

Though the plot itself didn't blow me away, it was enough to keep me interested in any bit of lore the game provided. Much of the backstory about the mansion’s former inhabitants is scattered about in the form of scraps of paper and diary entries. The unvoiced dialogue, as Emily narrates her actions or during her rare encounters with others in the mansion, is clever and heartfelt, if a bit long-winded, and the script’s over-use of ellipses alone was enough to make me steel my patience before any interaction. There is depth to every character you encounter, but it can be almost buried in long strings of text. So many conversations are littered with strings of “...” “...oh.” “...” “I see...” that you have to space bar through before any useful information is doled out. It seems like the goal was to make the dialogue more natural, but I couldn't help but feel like they would have been more effective if some of the interactions had been whittled down. 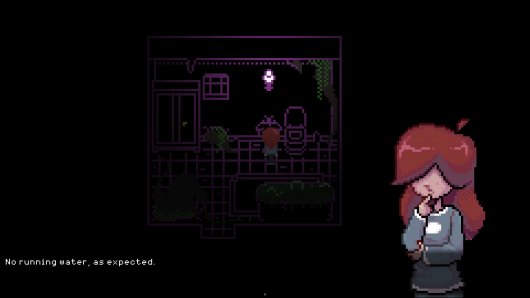 Despite its flaws, though, the game still flew by. I was able to complete it in roughly seven hours, experiencing three of the four endings by reloading late-game saves. I'm not sure how it would hold up to repeated plays, even with its multiple endings, as the deaths and dialogue quirks would likely become more grating when not buoyed by the sense of discovery and mystery. I can see myself returning to spend more time in Deeproot Manor, but I would hesitate to jump back in without significant time away in between. The strength of the game lies in its puzzles and effective build-up of tension and atmosphere, which by their very nature are diminished once you know what to expect.

The two games are quite different in many ways, but while playing Deeproot Manor I felt strong waves of nostalgia for the first time I played Maniac Mansion. I remembered exploring this weird haunted house and the feeling of excitement of digging through strange rooms, as well as the tension of not knowing what might pop up around any turn. There were little jolts of adrenaline when you had to run away, or relief when you found the room free and clear. And also some frustration in finding locked door after locked door, followed by elation when you found the cleverly hidden key. While many games have tried to emulate these strengths by using similar graphics or engines, this one succeeds in reproducing the feel of these moments. It’s a much darker game, but if you have any similarly fond memories of the horror games of years gone by, Deeproot Manor will certainly scratch that itch.

While Deeproot Manor’s extremely dark aesthetic and retro-styled atmosphere may not be for everyone, the game creates an exciting and memorable horror gaming experience, building something new and fun out of a host of old ideas.

What our readers think of Deeproot Manor