Investi-Gator: The Case of the Big Crime review

Adventure games by Games By Bees

While some adventure games are known for their challenging puzzles, out-of-the-box thinking and occasionally mind-bending twists, others are loved more for their colorful characters, interesting locales and excellent writing. Does a game have to have both to be good? No, as Investi-Gator: The Case of the Big Crime proves. Sometimes, you just need to be able to set yourself apart from the crowd.  If you’re looking for a deep mystery or smart puzzles, this game isn’t it. However, if you’re looking for a funny cast of anthropomorphic animal characters, more puns than you can shake a fishstick at, and a simple yet visually pleasing cartoon art style, you’re in the right place.

Despite its singular-sounding name, The Case of the Big Crime is actually a three-part mystery that follows Investi-Gator, a hilariously incompetent police detective (who also happens to be an alligator), as he attempts to solve several crimes, from burglary to kidnapping. Spoiler alert: he doesn’t get very far. Mostly because he’s not a very good detective, which is exactly how it should be in a parody of the traditional noir genre. Almost nothing in this game is meant to be taken seriously, and clearly the characters here are all in on the joke.

Red Herring, Mister Crime and Insti-Gator are amongst the characters you’ll meet, each taking on a classic role from traditional detective stories. Red Herring is the innocent bystander pegged as the unlikely culprit of a clock theft, grizzly bear Mister Crime is the mob boss who seems to get away with all of his crimes under everyone’s noses, and Investi-Gator’s brother Insti-Gator is the scheming villain who would just like a little recognition for his work, please. Well, alright, maybe that last one isn’t completely classical. As somewhat loose parodies, none of the characters, including the bumbling Clouseau-esque Investi-gator himself, are all that fleshed out. They serve mainly as plot vehicles and exist to spout off humorous jokes almost constantly, and it matches the story perfectly. 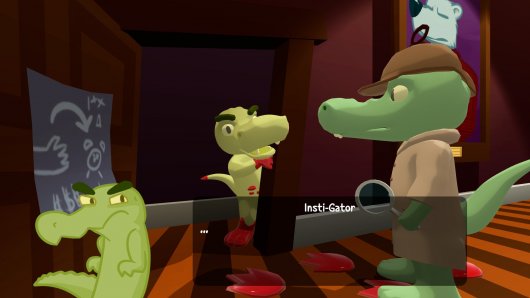 The playtime for all three cases combined is a little under two hours, and with few puzzles to solve along the way, most of your time is spent walking around and talking to other characters in order to move the plot along. It’s all very linear, as there are no real choices you have to make in terms of story or exploration, and the plot moves you forward as required. There are a few times when you need to retrieve items or find people, but nothing and no one is particularly hidden, except for the bonus elves scattered throughout the levels. The gameplay is actually quite well-suited for children, though some of the jokes – including one about a schoolteacher embezzling funds – will surely go over their heads.

Minimalist graphics aren’t usually my personal preference, but for The Case of the Big Crime they work very well. You get to visit several locations, including the police station, Mister Crime’s mansion, and a schoolhouse, as well as the local jail. All the characters and backgrounds are rendered in a 3D art style with basic shading and few details and textures. Much like the simplicity of the characters themselves, this nicely suits the streamlined story focused on delivering laughs, and the bright colors make everything pop without being headache-inducing. The characters each have small 2D illustrations that appear next to the text boxes when they’re talking, expressing several emotions but drawn in a similarly cartoony art style. 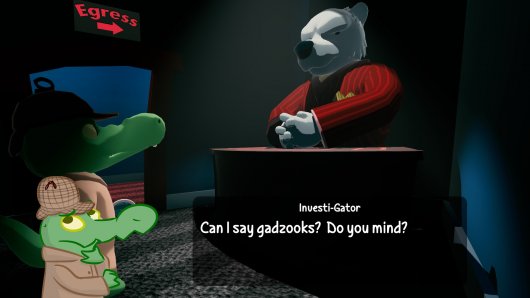 Sound design plays a large part in the game’s comedy, with effects playing every time a character speaks or performs an action, all backed by several jaunty, jazzy piano numbers playing in the background that wouldn’t be out of place in an upbeat episode of Perry Mason. None of the characters are actually voiced per se, but the sound effects for their speech convey the tone well enough and let players imagine their voices fairly easily.

You’ll never get to solve any of the crimes yourself, simply follow the trail of breadcrumbs left for you until Investi-Gator comes to his own uniquely clueless conclusions, so a serious detective game this is not. For a fun little diversion, however, Investi-Gator: The Case of the Big Crime hits the nail on the head. If your brain has turned to mush after a marathon Professor Layton session or you’re just looking for a few laughs to unwind, you could do far worse than to hang out with this game’s titular lovably inept reptile and his oddball animal friends for an afternoon to solve a few breezy cases.

Investi-Gator and the Case of the Big Crime is a short but sweetly entertaining romp that lightly pokes fun at the tropes associated with classic mystery stories. While it doesn’t require any critical thinking and there is a distinct lack of puzzles, it’ll be a welcome diversion for those wishing to take a break from more serious fare and have a few laughs at the same time.

GAME INFO Investi-Gator: The Case of the Big Crime is an adventure game by Games By Bees released in 2019 for PC. It has a Comic cartoon style, presented in Realtime 3D and is played in a Third-Person perspective.

What our readers think of Investi-Gator: The Case of the Big Crime