When first seeing Paper Bunker’s puzzle marathon The Pillar, one can absolutely be forgiven for drawing direct comparisons to Jonathan Blow’s 2016 masterpiece, The Witness. In fact, the two games share so many aesthetic and content-related similarities that parallels between the two are surely intentional rather than pure coincidence. Whether that’s a wise move is debatable – it certainly puts The Pillar in great company, though it also sets such a high bar that it’s not quite able to clear it, though it makes a solid attempt. While putting its best foot forward with a lovely presentation, the game sometimes struggles to find that same Zen puzzling zone and stand on equal footing with its revered inspiration.

Without any preamble, players are deposited in a free-roaming first-person world, one with a very pretty and hyper-colorful stylized presentation. The object of the game is to navigate seven self-contained worlds (eight if you count the short intro level), opening up a portal at the end of each that takes you to the next one. Every level has its own distinct visual theme and a collection of puzzles scattered around it. The worlds aren’t terribly big, and completing their puzzles often opens the way forward in some fashion – opening access boxes, unlocking gates, or causing further puzzles to materialize. The majority of puzzles are attached to pillars in the environment and transitioning between worlds is accompanied by a glimpse of a scene involving another such pillar, with a few more seconds tacked on after each successfully completed world. This is clearly intended to offer some sort of narrative thread, but even by the end it remains quite cryptic.

Each of these worlds is a solitary piece of land floating in its own space and designed with a unique concept in mind: a tranquil garden, a simple hedge maze, a clearing surrounding a large tree. You are never in any danger: there are no traps, you can’t fall off the edge of the map, and there are no timers or enemies to contend with. The game wants players to leisurely soak in the visual beauty of each location, most of them accompanied by gorgeous instrumentals like a tuneful piano piece playing while you explore. All of this adds up to a very pleasant experience, though unfortunately there isn’t enough to actually do. Outside of the puzzles, each stage only offers the additional optional task of finding several pieces of a pictograph tile, which has no direct bearing on the gameplay. 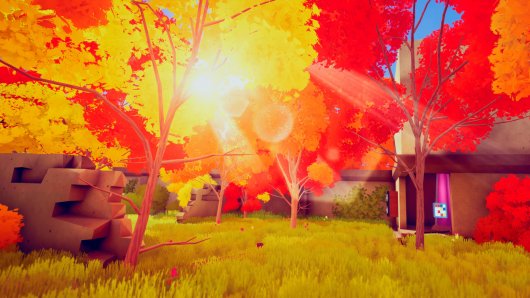 The puzzles, of course, are the real draw here. You’ll spend a large chunk of your time solving the panel challenges attached to obelisk-like pillars scattered around the environment – four puzzles, one per side, as you circle around each one. Many pillars will, upon completing the first group of four brainteasers, rise further out of the ground to reveal another set that was hidden from view. So often there are eight puzzles per pillar, with quite a few total pillars in the game. While the easier puzzles may only take seconds to work out (and spinning around a pillar in record time, crushing puzzle after puzzle DOES feel great!) the problem lies in their repetitious nature. Though the game starts with one puzzle type and adds a few more to it as it moves along, there are only a total of five different puzzle variations tacked onto the pillars, so you’ll see the same things and complete the same tasks over and over. As the difficulty curve ramps up, the puzzles become busier and more hectic, though this does not necessarily translate to more entertaining.

The intro and entire subsequent first world keep things basic by only asking you to connect matching colored squares on a grid with lines that cannot cross or overlap without leaving any squares empty. This activity is the most forgiving and makes up the lion’s share of what you’ll find in The Pillar. Grids vary between 4x4, 5x5, and 6x6, though nothing beyond that. After progressing a bit, additional puzzle types are introduced: there’s repeating a series of moving patterns that flash once across a blank grid; tracing a path that covers a uniquely-shaped grid entirely one square at a time from a specific starting location; filling in a grid by pushing a marked block so that it slides until it hits the end of a row or column without overlapping a full row; and swapping two blocks to match up sections with specific colors (these last two appear the least, due to not being added until later into the game). That’s it; rinse and repeat, at least where the pillars are concerned.

Thankfully, some palate-cleansers are scattered throughout the worlds in different ways. While these aren’t deeply complicated, they are a welcome breath of fresh air to break up the pillar puzzles and, in some cases, manage to make use of the environment in interesting ways. Having to sleuth around to find a number code or a pattern to input, even playing with shifting perspectives to line up separate pieces of a code, or peering through gaps in a wall to isolate details in the terrain beyond feel like great ways to stretch your virtual legs a bit. Operating a gun-like contraption, realigning and mixing colored laser beams, or finding the right order to push a series of scattered switches (though this last one seems to just rely on random trial-and-error) are some of the challenges that await. Outside of the intro, each world incorporates these to some degree, with the last level or two really striking a great balance between the standard and more integrated puzzles. (Though the fantastically satisfying final puzzle extravaganza is undercut by a wholly unenjoyable two-dimensional maze that must be navigated while being lit only by occasional strobing flashes of light.) 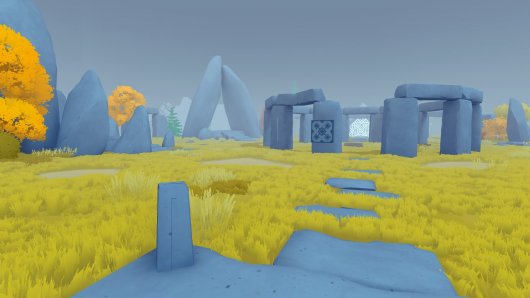 The five pillar puzzle styles are different enough from each other that some will inevitably click with you. However, you’ll get heartily sick of those that don’t make your personal cut – in my case the pattern-tracing puzzles – but they will still need to be dealt with continually anyway as they get longer, faster, and far more complex in the last few worlds. It got to the point where I would count myself lucky whenever a pillar opted for the other four styles, sparing me from further pattern traces. An odd design choice occurs during the later levels, when, rather than every puzzle pushing the difficulty forward, several very basic iterations of the familiar puzzle archetypes can be found mixed in – some so simple that they would feel noticeably out of place even in the game’s early sections.

While stepping away from pillar puzzles to engage in the environmental challenges offers a terrific change of pace, the game is missing that “special something” that gives the setting some context and ties it together; a sense that exploring the world will tell you something about it, and provide a reason to do so in the first place. Without this, the beautiful settings are relegated to pretty set-dressing to spend four or so hours in, rather than being a fascinating world of wonder that they sorely had the potential to be.

Superficial connections can certainly be made between The Pillar and the superior The Witness, but it doesn’t take all too long for the two games to diverge on some fundamental aspects. While both the look and the sound of this game are well-crafted, the stylish presentation is unfortunately in service of an underdeveloped experience, held back in large part due to repetitive puzzle designs and sketchy world immersion. There’s enough here to please puzzle enthusiasts for a brief time (that is, if enough of the challenges on offer are your cup of tea), but those looking for another instant classic won’t quite get it here.

The idea behind The Pillar works when done well, as we’ve seen before, but a bit more substance is needed to make both the beautiful world and its gameplay click better here. As it stands, it must settle for being a decent, if imperfect, puzzler.

GAME INFO The Pillar is an adventure game by Paper Bunker released in 2019 for Mac, PC, PlayStation 4, Switch and Xbox One. It has a Stylized art style, presented in Realtime 3D and is played in a First-Person perspective. You can download The Pillar from:
The Good:
The Bad:
The Good:
The Bad:

What our readers think of The Pillar