Once upon a time there were four Jötnar, Guardians of the four seasons of the year, who protected the ancient Scandinavian forests. There was Jötunbjörn the Bear, who represented fall; Jötunhjort the Stag, who embodied summer; Jötunúlfur the Wolf, who stood for spring; and Jötunravn the Raven, spirit of winter. As the ages passed, Raven fell in love with a human man. She took the form of a human woman, Rörka, and gave birth to a creature who was half human, half Jötnar, wild and unnatural. Raven’s three fellow Guardians combined their powers and sealed her and her son away, never to return to the forest again. To this day, Rörka still searches for a way for her son to return, and continues to send ravens to the world of man to act as her eyes and ears.

Thus, the stage is set for Polygon Treehouse’s charming adventure Röki, when young Tove Jakobsen reads this selfsame tale one night to her little brother Lars in the cabin they share with their withdrawn father Henrik. But as Tove will soon find out to her horror, legends and fairy tales are more real than she thinks as young Lars is abducted by a monstrous giant creature straight out of his favorite bedtime story. Now Tove must pursue them into the forest and through a portal to a magical world where she’ll need to track down the three remaining Guardians and convince them to help her find her brother.

This setting really plays to the strength of a child’s propensity for readily embracing a magical fairy tale reality. Exploring the woods (the game does introduce yet another location for its final chapter) felt heavily reminiscent of Sierra’s original King’s Quest to me – a realm filled with wondrous creatures ripped straight from the pages of fantasy storybooks, only this time featuring the mythical denizens of Scandinavian folklore, largely unknown to me, and draping everything under a thick, comfy layer of white, powdery snow. 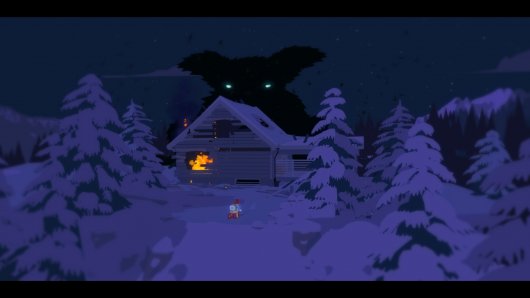 The cast of fabled characters is impressive. Apart from the hidden Jötnar, there are many others you’ll encounter in your search for them, including the boulder-like Trollhilde, who lives under a bridge and will beseech Tove to help pull a dagger from her back; a host of pint-sized Tomtes, tiny gnome-like men who prefer not to be seen but can lend a helpful, magical hand under the right circumstances; the utterly terrifying Nokken, whose tortured visage is nightmare fuel as its long tentacles pull unwary travelers to a watery death within its pond; and Jólakötturinn, the large, vicious Yule Cat whom mothers warn their children about in hushed voices, for he hunts and eats those who have not received any new clothes to wear for Christmas.

But it’s not just the roster of fairy tale figures that lends Röki an air of authentic atmosphere. The dialog and voice acting more than pull their weight in that department, even though each line of subtitled dialog is only accompanied by a single spoken word, or even just an exasperated sigh or mischievous giggle. It’s great how often the script sees Tove slip back into her native tongue, but always in a way that makes it a simple matter to infer meaning from context. Only a handful of characters get this partial voice-over treatment – Tove and Lars among them – but the quality of the acting really shines through.

Tove especially is touching to listen to when she despairs over her lost brother, or in the plentiful moments when she recalls a family memory or life lesson she learned from her father. Finding and examining her mother’s old pearl necklace, for example, causes a fond giggle and mumbled “Mamma,” almost meant more for herself than for outsiders to hear, and nothing could be more natural. She’s been thrust into this adventure, but the game never forgets she’s still just a young girl in a frightening situation who desperately misses her parents and fears for her brother’s safety. Moments of success also stand out, with Tove occasionally uttering an excited bubble of jubilation when solving a problem correctly. 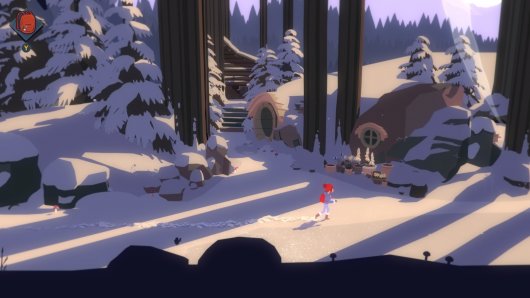 As the narrative unfolds, it becomes evident that there’s much more at play than just a curious sojourn into a magical forest. Even at her young age, Tove has a lot of emotional baggage she must deal with, and the game makes her confront all of it. It all centers on the tragic death of Tove’s mother years ago, and how this event caused ripples to spread through the whole Jakobsen family, affecting all of them in different ways. Saving each Guardian requires Tove to face a dark truth from her past, handled very well through a number of gameplay sequences set in Tove’s subconscious.

These scenes encompass a different, more surreal type of storytelling than the rest of the game, but it really fleshes out the protagonist’s character and is assisted by Röki’s gentle musical backdrops. Showcasing authentic native sounds like wooden pipes, the accompaniment, at its most exuberant, exhibits a sort of lilting quality, though this often gives way to sustained periods of a more subdued, meditative score. As easy as it is on the ears, it is a bit lacking in strong themes, particularly during the narrative’s high points. The incorporation of environmental elements like the crisp sound of wind chimes swaying in the breeze is a nice touch, however. Sound effects stand out positively as well, with satisfying swooshes and clicks when manipulating inventory objects, the crumply sound of paper when paging through Tove’s journal, and a rewarding tinkling when performing a correct action.

The stirring emotional narrative is already half the battle won, but the actual gameplay is no less skillfully executed. A third-person, free-roaming adventure, Röki can be played using either a controller or keyboard but largely eschews the mouse. As such, it’s not so much a “point-and-click” adventure, but rather one of the “run-up-and-push-the-button” variety. Not that this makes much difference, but it does mean that hotspots must be activated by standing physically next to them. To lend a hand, a helpful hotspot highlight function is implemented that makes interactive objects flash briefly; anything that has served its purpose or has already been examined tends to become inactive, reducing the need for trial and error. Opening Tove’s backpack allows you to select and drag an item to where it is to be used on-screen (or on top of another inventory item to combine them). 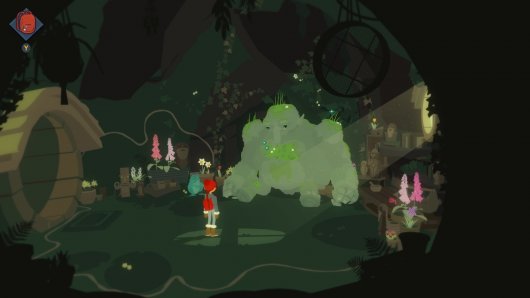 The game is filled with inventory puzzles from start to finish, and it’s usually the case that you’ll have multiple objectives running at the same time, chipping away at all of them bit by bit until one resolves itself. It can feel like a lot of balls to juggle at times, but Tove keeps a good record of what’s going on in her journal, and the difficulty curve is pretty gentle anyway. I found it almost too easy during the first two chapters, though it does ramp up somewhat in the third and final chapter, without ever becoming unfair or frustrating. There is also a smattering of more traditional puzzles thrown in, where you may need to interpret how to operate a device or decode a mysterious poem in order to proceed – even a “boss battle” that plays out like a puzzle utilizing angled mirrors to redirect light beams throughout a cavern so large you must climb between its multiple levels to do so. It all adds up to a consistently fun and engaging experience with plenty of variety and no noticeable hiccups or slowdowns. The final chapter even features dual playable protagonists that must be switched between in order to solve some puzzles together.

All this adds up to an experience that takes around ten hours to complete, which feels more than substantial enough to satisfy considering how densely it’s packed. Admittedly, there are moments of trekking back and forth through the environments – both chapters two and three consist of large areas with plenty of points of interest – but one chapter contains fast travel gates to unlock while another allows you to open up shortcuts that connect back to previous locations, so the game’s size stays pretty manageable.

This accessibility goes hand in hand with an appealing art style. Colorful hand-drawn, almost cel-shaded backgrounds that look like something out of a storybook are brought to life with abundant animation for characters and environments alike. Coming across a derelict church is both a serene and creepy experience, with cobwebs sharing space with toppled pews flung haphazardly all over the place. A chilling discovery awaits in a nearby shed, where a shrine is revealed to be a memorial to deceased children. Tove’s journey takes her to many varied locations such as craggy mountaintops, overgrown forest glades, subterranean caverns, a decaying castle, and creature lairs aplenty, each with its own distinct visual style. Eventually, Tove finds evidence of a blight haunting the forest, a poisonous fungus that slowly eats away at it; from this moment on, places she’s already visited will begin to show signs of the spreading infection, adding an air of urgency to her quest. 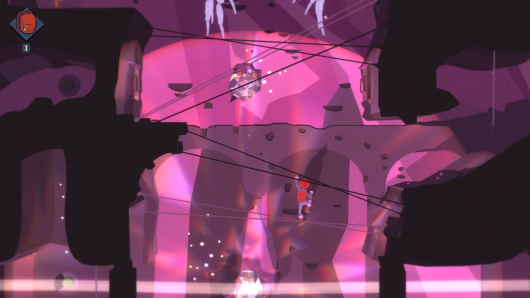 An easily overlooked aesthetic element is the use of foreground details, oftentimes even animated ones, which add welcome additional depth to the forest setting. You can be admiring the lovely trees and flowers when the black silhouette of a wolf you didn’t even realize was there suddenly raises his head and howls at the sky as Tove passes by. A few individual locations feel just the slightest bit cluttered, a case where “less is more” might have helped to appreciate the interior decorations of, say, a troll cave. There’s also a minor quibble about facial animations during dialog, which are usually too zoomed out to be visible but show odd lip movements during a few close-up shots. But even then, it’s never anything immersion-breaking.

Overall, Röki is an expertly made game that weaves together multiple layers of emotional narrative within a polished framework that is as satisfying to play as it is pretty to behold. It presents a charming, magical fairy tale story based on a mythology that’s been largely unexplored by adventure games. At the same time, it incorporates a beautifully touching component of a girl dealing with tragedy in her life, both past and present. Finding just the right balance of challenge and gameplay diversity, it offers oodles of entertaining puzzling that will satisfy gamers of varied experience, and it makes the most of its lovely art style and limited voice-overs. Blended together, these elements form a modern classic adventure filled with magic that is sure to charm young and old alike.

On its surface, Röki delightfully explores a rarely visited branch of Scandinavian folklore, but delve deeper into this thoroughly charming fantasy adventure and you’ll find a beautifully told, emotionally engaging narrative that’s sure to resonate with players of all ages.

GAME INFO Röki is an adventure game by Polygon Treehouse released in 2020 for Mac, PC and Switch. It has a Stylized art style, presented in 2D or 2.5D and is played in a Third-Person perspective.