The number seven has had an eventful run in popular culture. It was the Church’s preferred digit by which to catalogue sinners; it taught Brad Pitt the importance of checking the label before signing for a delivery; and even Trilobyte agreed that parties are certainly spookier when with a 7th guest. Indigo Studios’ own septenary offering, however, with its uninspiring brain-teasers and half-baked mazes, is a far less thrilling prospect, and compared to other similarly Gothic-leaning titles it leaves a lot to be desired.

Seven Doors is a bite-sized puzzler in free-roaming, first-person 3D and has a basic premise: overcome seven challenges to obtain seven golden skulls, which unlock the doors blocking your progress through the game. Its presentation is without any airs, a fact that is underscored when you’re unceremoniously dumped into a stately, Unreal-rendered library with only the briefest of aural introductions and some plaintive piano music. It doesn’t quite set the mood, especially when the bit of flavour narration from the Catalonia-based developer sounds suspiciously like text-to-speech.

Solving your first skull-related mystery is surprisingly unchallenging, and as the library door swings open, the nature of your stay here will become clear: you’re essentially a captive, sentenced to follow a linear path through a successive series of hallways towards the next predetermined place. 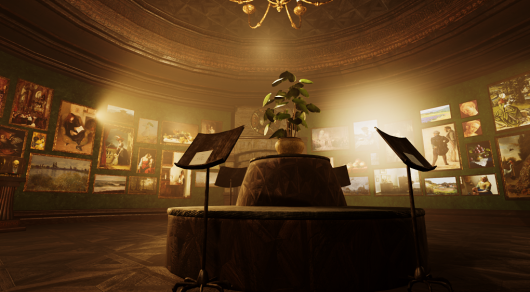 These rooms may have haughty titles such as “The Museum of The Soulless Man” and “The Hall of Tragic Fate”. But under all this loftiness, the backstory here is rather bare-boned at best. Indeed, you’ll be quite far along before the first, very minor hints that someone has progressed through these areas before you crop up. As jarring as these are when no such reference has been made previously, they’re a welcome addition as it’s the only time you’ll have an inkling that this labyrinth was braved before by another soul. This lack of personality overall is rather disappointing since the game is clearly trying to invoke a horror-esque vibe, but it’s missing the atmospheric touches that made similar games like Shivers so eerie.

This kind of far-too-understated approach epitomises the whole endeavour. As fanciful as they might appear at a glance, the few puzzles offered in Seven Doors rinse and repeat the same mechanics far too often, requiring only a negligible amount of brain-racking. It’s also what makes them so difficult to discuss, as even a basic description threatens to give too much away.

Take, for instance, what’s behind door number two, “The Enigma of Chaos.” This scene sports four pedestals, each with a bowl, and a riddle presented on a card, surrounded by random objects – among them an antique vase, a wood-burning range, a brass candelabra, and a very modern-day plastic bottle of detergent. That last one might be a red herring, or just a lack of attention to detail, as not a lot of thought seems to have gone into the presentation. To escape this room? Simply solve the riddles (these are short but rather well-written), deduce the connection to the junk lying around, and voila! You’ll have a collection of key-shaped skulls before you know it. The fourth room, “The Gallery of Framed Dreams”, may swap out the knick-knacks for paintings, but it’s more of the same. 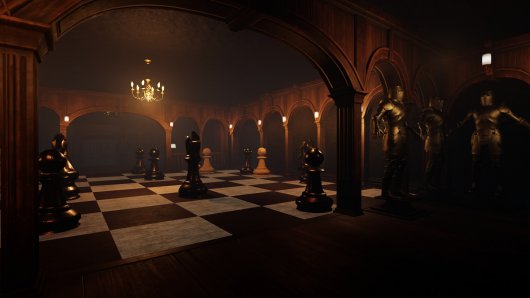 Using thematically similar mechanics to link challenges together isn’t necessarily a bad way to go. Portal is essentially about finding ever more creative ways to shoot holes at walls, and escape room stalwarts use innovative puzzles with clever solutions to keep you scanning the environment for even the tiniest of irregularities. If Seven Doors had led with several imaginative rooms based around riddles with some quirky wordplay, it could have achieved something similar, but just strewing around assets or randomly plastering walls with public domain art is not good feng shui.

What will harsh your mellow even more are the two maze sections, where a single misstep can lead to an untimely end. It’s not their innate difficulty that will hasten your demise, but rather the slapdash way in which certain elements have been cobbled together; purposefully vague objectives may lead you down a garden path of frustration, and imprecisely placed objects will result in confusion when their position contradicts the rest of the puzzle (at least, I hope being able to circumvent large parts of one maze by hugging the outside wall wasn’t intentional).

With impediments like these, it’s far quicker to opt for a more brute force approach; trial and error (and dying once or thrice) will eventually place you in the vicinity of the next skull. The generous autosave system will rescue those souls unlucky enough to fall victim to any troubles, but unfortunately it failed me on a second run-through when it got stuck in an infinite loop. 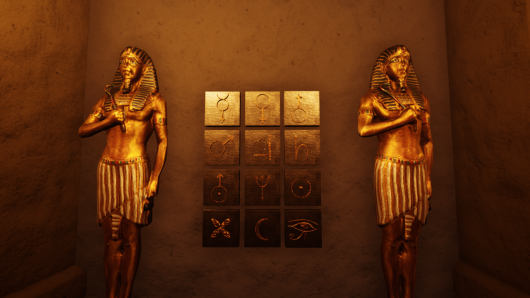 Such issues aside, Indigo Studios should be credited for trying to make these sections visually distinct and slightly unsettling – there are desiccated figures at the centre of one mystery, and over-large chess pieces on a floor-sized board in another fit into a finicky movement puzzle. But for a maze to be compelling, it requires more than foreboding music and a game-over screen; there should be a fear of getting lost which isn’t possible when the exit is always only a few feet away.

Thankfully, what lies beyond is more interesting. While parts of Seven Doors are thematically dissonant, such as that room of paintings where impressionist Monets clash with 17th-century de Hondecoeters, “The Secret of the Pharaoh” fits snugly within the haunted mansion vibe. In the 1900s you couldn’t chuck a canopic jar without hitting an aristocrat suffering under some mummy’s curse. This section might seem like more of the same on first impression, and it is overlit, but it contains a cryptographic conundrum that makes for quite the breath of fresh air in this stagnant tomb. Finally! An enticing mystery with proper clues, some that even require whipping out the ol’ notepad. Most importantly, there’s a sense of accomplishment when the door finally swings open.

The same cannot be said for “The Hall of Tragic Fate”, aka The Torture Chamber of Sharp Things. You’ll potentially be sliced, diced and julienned by guillotines, twirly blades, and that every dependable dungeon staple, spikes . . . or at least, that’s the idea. Well-crafted action-orientated set pieces are useful for breaking up monotony, and a world as staid and static as that of Seven Doors could’ve greatly benefited from some. Unfortunately, this isn’t so much a skill-based obstacle course as it is a gore-covered drag race track. No real supple acrobatics are required here, even with the somewhat lumbering controls; just sprinting in a straight line should get you through the worst. 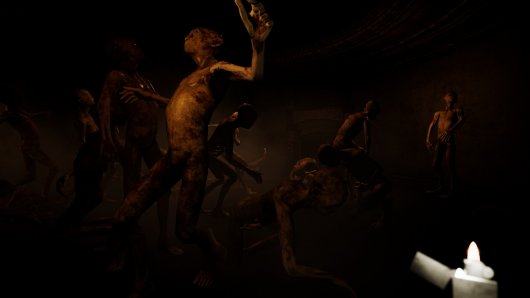 Even inexperienced puzzlers should be able to escape Seven Doors well under the advertised two to three hours. A quicker experience isn’t necessarily a bad thing – not everyone’s schedule allows them to set aside days for head-scratching and pixel hunting. There’s always space for shorter distractions, and there’s something pleasing about knowing you can dip in and make reasonable progress within a few minutes. It’s what made Professor Layton’s self-contained puzzles such fan favourites. But if you’re only offering a small buffet, what’s on the menu should be extraordinarily tasty. What’s served up here is generally bland, however, and it’s unlikely that the flavour will linger long past the lacklustre ending.

Hopefully better things are on the horizon for Indigo Studios as they have a few more ‘interactive stories’ in the works – including the promising-sounding Lucidus Mortem, which is supposed to be much bigger than this debut effort. As for Seven Doors? You’ll speed through its lackadaisical, linear puzzles only to come to a sudden stop when haphazard maze design rears its frustrating head. And while the occasional well-written riddle or Egyptian enigma offers some promise, neither can fully salvage the experience. There’s practically no story here and little to appeal even to puzzle fans looking for a challenge, so it won’t be gaining entry into the pantheon of great fiction based around that infamous number.

Despite some promising elements, Seven Doors offers only the merest illusion of depth with its dull and dusty environment, overly simple puzzles and sometimes frustrating design issues.

What our readers think of Seven Doors