A sudden suicide and a new job as a ‘white hat’ hacker provide a chance to snoop through the deceased’s digital life in TriTrie Games’ Jessika, piecing together what happened leading up to the tragic event. What starts as an intriguing Her Story-style FMV mystery, however, quickly develops into a very sombre tale that’s marred by some puzzling design choices.

Working for an ethical hacking company called ‘White Flower’ (which does sound a little like a prudish chastity group). your goal is to discover what happened to the titular Jessika on behalf of her father, who seems understandably distraught and wanting answers. You do this by finding and accessing files on Jessika’s computer, sifting through video diaries and scanned images to learn more about what happened, updating her father on your progress as you go. The first few files that you uncover definitely build the suspense and draw you into the story.

As you work, your main focus is the screen of your in-game laptop, which is surrounded by a blurred outdoors scene, with traffic and people going to and fro, accompanied by background sounds. There’s no default soundtrack, although you do have a few music files stashed away on the computer that can be played if you want to. These seem to be a mix of dance music, some with a more intense beat and others with more of a chill-out vibe. It’s not possible to create a playlist, so you’d need to go in to select each file individually if you’d like to listen to one in the background. The graphics are relatively simple but that’s really all that’s needed, since the focus is on the video blogs that you discover. That said, the image files (newspaper clippings, the doodles of a child, fliers, screenshots and diary entries) are well-crafted and add to the immersion. 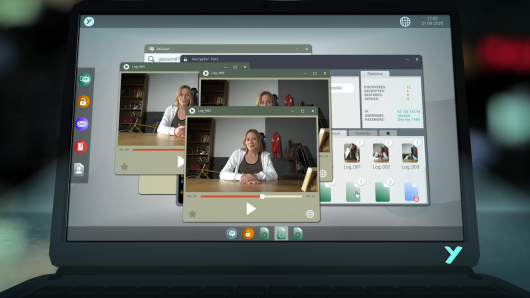 The short (ranging between a few seconds to a minute) video clips are high-quality and filmed in a handful of locations, mainly in what is presumably Jessika’s house, along with a few other places including the toilets of a club. German actress Lisa Sophie Kusz, speaking directly to the camera, is absolutely superb as Jessika, being incredibly convincing throughout, which only adds to the gravity of some of the more disturbing scenes. Explaining those scenes more would detract from the twisting and turning nature of the story, but it’s worth noting the message at the start of the game that warns about “swearing, references to drugs and alcohol, rape and hate speech.” This is certainly not for everyone, and there are quite a few video clips that make incredibly uncomfortable viewing – though thankfully without any visually explicit scenes. The subject matter means this is not a ‘fun’ game to play.

The interface is unfortunately also not fun. Most of your time will be spent switching between an instant messaging tool (‘Wizzapp’) to talk to your colleagues and client about what you’ve discovered, your emails (primarily used for context setting and also to give a spotlight to political views that differ from those in files you find), and decryption software.

The decryption tool is the main method for discovering, unlocking and reviewing files found on Jessika’s computer. By entering a search tag, the software cross-references against items on the target PC and displays what’s been found. Some files can be viewed as soon as they’re discovered, while others require additional search terms to be entered before they become viewable. The game doesn’t signpost this system particularly well, however. At the start, it tells you there are different levels of difficulty that each decryptable file has, and that the tougher ones require “much more correct terms” to be entered. As the instructions also talk about getting as many characters correct as possible to crack a password, I thought the harder files involved a different mechanism to unlock. In actuality it’s quite straightforward. You enter a keyword into the tool based on the files you’ve looked at so far, and if it’s correct the software shows you what related files it has found and in some cases will unlock files previously marked as needing decryption. There’s no actual decryption here or any codes to crack. 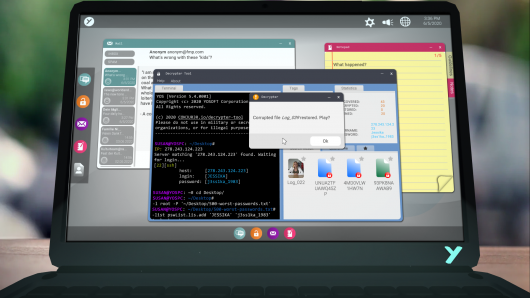 Deciding what to enter as a tag is also quite simple; it’s just a case of paying close attention to the files you’ve reviewed and entering any keywords that stand out, one per search. For example, since we’re looking into Jessika’s recent death at the request of a family member, ‘suicide’ or ‘family’ may be good starting points, Thankfully, there is an easily accessible notebook function built into the game so that you can jot down possible words as you go. The decryption tool is easy enough to use but is really missing a ‘maximise window’ function. You can mark files as ‘favourites’ once you’ve found them (it’s the only way to really keep track of them all), but the ‘favourites’ part of the window is so small it becomes fiddly to scroll up and down and find what you’re looking for. Additionally, as you play the video clips, the filenames change and point to a clear sequence (Log 001, Log 002, etc.) but there’s no way of sorting them. It would have been great to be able to rearrange them so that you can easily replay them in the right order, but with 175 files and no sort function, the interface makes this impractical.

Whilst you’re cracking these files and chatting with your colleagues using Wizzapp, at points the screen will glitch, with the window you were working in automatically closing and a high-pitched sound playing. At first this is startling and works well to build tension – is someone messing around with your computer? Is it malfunctioning somehow? Does it have anything to do with your investigation into Jessika’s death? However, it keeps happening again and again and ultimately becomes extremely aggravating. Every time you have to reopen the window you were working on, often having to replay part of a video to see if there’s anything you missed. On a couple of occasions I had to reboot the game (no progress was lost) as for some reason I was no longer able to enter any search tags. 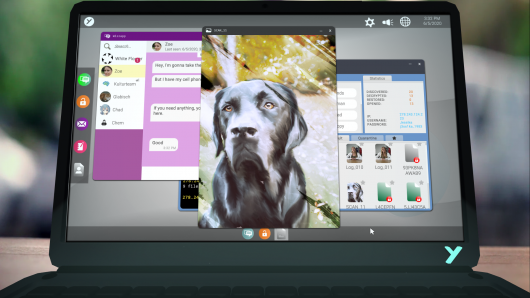 The approach to subtitles is also quite strange. The game’s original language is German, with an option to toggle subtitles and audio to either English or German whenever you like. The English audio is dubbed and although the voice-over (by the same actress) is okay, the videos are more authentic-sounding in their original language. I tried to play the videos in German just using subtitles, but for some reason they are off to the side of the screen, which takes focus away from what’s happening in the scene. Additionally, you need to switch the subtitles on for each video. Individually. Every single time. The text is also not always properly synced with the audio. The translation, too, is a little off. The English feels quite clunky, to the point of sounding rather strange in places (“everybody cheers on me,” “all that rustling of raising a family”).

The genuine desire to know the full story (which is around four to six hours of playtime) pushed me to battle through the interface irritations and eventually all of the clues and clips bubble up into a surprising and dramatic ending, which is likely to leave you with more questions than when you started. Given the extremely sensitive subject matter, there’s certainly a serious message contained with Jessika, designed to give you something to think about post-game. The video production is solid throughout, particularly in the original German; it’s just too bad that the frustrating design choices and clumsy translation prove to be too distracting to fully appreciate.

The FMV mystery Jessika supplies a thought-provoking if uncomfortable story, though a number of flaws in the interface and to a lesser extent the English translation take focus away from the tale it’s trying to tell.

GAME INFO Jessika is an adventure game by TriTrie Games released in 2020 for PC. It has a Live Action style, presented in Full motion video, Illustrated text and is played in a First-Person perspective. You can download Jessika from:
The Good:
The Bad:
The Good:
The Bad:

What our readers think of Jessika