I'm going to throw out some words and you think about how they make you feel:

Good. Now if you're still with me, you may just like The Dreamcatcher, a game about dreams and the psychological significance they may have in our waking lives, and vice-versa. It opens with a Sigmund Freud quote which serves as its thesis statement: “The dream is the fulfillment of a wish.” This is a chance to explore that concept while walking through beautifully rendered surreal locations, though it turns out you won’t really be doing much of anything else along the way. 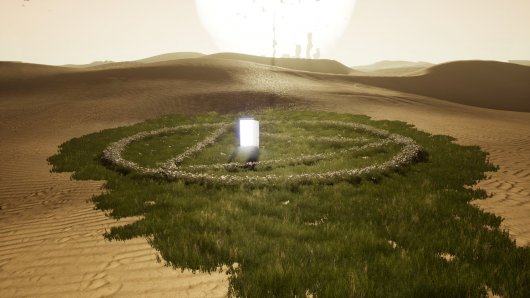 You begin in the middle of a desert. The game takes place in first person in a realistic 3D environment, and it's beautiful. You can see the sun reflecting off the rippled dunes, and a hazy, shifting image of a city backlit by the setting sun. You walk using standard WASD and look around with the mouse (or the twin sticks of a controller) and happen across small pieces of civilization sticking out of the sand. A torn art canvas on an easel. Two paper hearts. A door in the middle of a grove of grass and white flowers arranged in an odd pattern. A light piano rendition of Beethoven's “Pathétique” begins to pour out of your speakers as you move. You are able to open the door, and as you do, the world fills up with white light and you find yourself waking up in bed, bleary-eyed and blinking, just in time to see a woman quietly leaving the room.

This is where the narrative starts. The protagonist is a young man experiencing his first day of unemployed life in his cozy but stylish one-bedroom city apartment. He's an artist, as evidenced by the unfinished painting sitting on its easel, the canvases piled up against the wall, the oil paints lying on his IKEA-style desk. He lives with his girlfriend, who has left breakfast on the table for him and a note urging him to stay in today. With nothing better to do, you flip on the TV and see that the air quality is poor today before drifting back off to sleep.

And you're in a dream again. 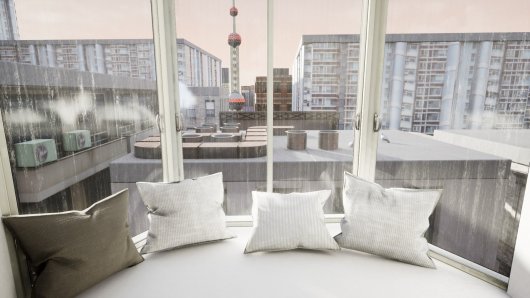 This is The Dreamcatcher’s loop. You wake up, wander your apartment looking at things or completing minor tasks, go to bed, and then move about your dreams in pretty much the exact same way. As the game progresses this loop remains, but things get weirder and the two worlds begin to merge. Interactive items in each become highlighted when you look at them in close proximity. You have no inventory, but when you must pick up and use an object, it happens automatically. When you need to interact with something, a glowing dreamcatcher symbol will appear and you simply click on the symbol to make the action happen. There are really only two moments in the game where you have to find and use an item to overcome an obstacle, and both are clearly spelled out and the actions easily intuited. The interface is as simple as it could possibly be, though even the sprint function is not as fast as I would have liked to get around the larger open spaces.

The game is extraordinarily linear, in that you only ever have one thing you can do at a time to progress the story. There are a few objectives that are made clear, and a few that are only implied. In one of the early loops, there's a knock at your apartment door for the delivery of a package containing a Native American-style dreamcatcher. The accompanying note informs you that if you hang the dreamcatcher in your window, your dreams will become “continuous” and you must now find the five missing gems to complete it. (If you're expecting some story payoff for finding the gems, I'll tell you right now it's not going to happen.)

Every time you lay down in bed after that, you're whisked away to a different world, each containing one of the gems. Leading you through these worlds to their respective gems is usually some clearly implied path or goal. Often you're chasing a woman in a white dress and what appears to be a red scarf that you can see off in the distance. In one world – a smog-filled forest filled with garbage and broken machinery – you happen across a great island-sized tortoise that wants you to clear some smoke before it agrees to help you. In another, you find yourself trapped in a dark subway tunnel and need to return to the waking world to find a flashlight (it's revealed in another note that objects you focus on while awake can invade your dreams). 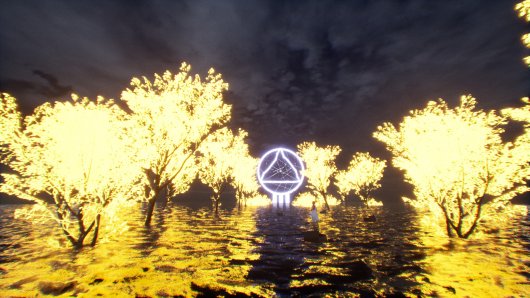 None of these tasks are very challenging. What you’re required to do is either plainly obvious (follow the woman) or completely spelled out for you (“I need to find that flashlight!”). The game has no death but there is a pseudo-death mechanic in certain sequences, where if you don't solve a simple puzzle correctly, you will wake up and have to redo the sequence. But these are few and far between. There is also a collection aspect of gameplay, as you find glowing paper hearts throughout each dream world. A few are scattered off the beaten path, but none should be difficult to locate if you take just an extra minute or two to explore each area fully.

As you progress through The Dreamcatcher, your world gets darker. Your surroundings turn from a fantasy dreamscape and a luxury one-bedroom flat to a dingy basement apartment and an eerie realm of nightmares. I wouldn't go so far as to call it a horror game, but the later scenes definitely have some creepiness throughout them: ghostly figures wandering through gloomy dead forests, ghastly hands reaching up from dark waters. There are a couple light jump-scares and a few things lurking in the backgrounds that took me by surprise, but nothing the faint-of-heart couldn't handle.

One thing that adds to this thriller-like tension is the sound, if not consistently. Save one spoken line, there is no voice acting and almost no music in the game at all. Aside from the beautiful opening piano number, the audio is largely comprised of the likes of wind in the trees, the static of a broken TV screen, the creaks of an empty apartment, and flies buzzing around piles of garbage, but the sounds felt uneven to me. When they work, they help a scene feel totally immersive. There were moments where I was leaning into my headphones, focusing on every creak so as not to miss any diegetic storytelling. But there were other times where the effects were jarring and pulled me right out of the moment. That Beethoven piece, though? *chef's kiss* 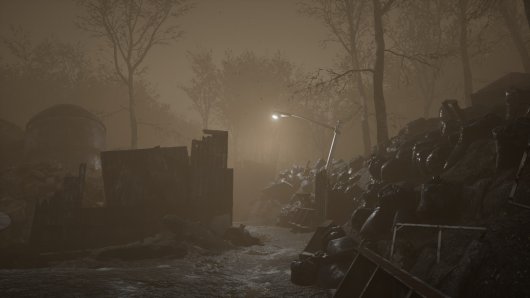 The game boasts multiple endings, and as far as I can tell there are three. One, which I believe is the standard ending called “The Truth,” contains a slight twist and I think fills in the missing piece of what the game is really “about” (at least my interpretation of it). However, another following the credits, which I suspect is a reward for finding all of the paper hearts, is called “The Future.” This one contains a deeper revelation that totally sank my understanding of the plot and rendered the game’s narrative complete nonsense to me. There is also a third that replaces both of the others that I had to be told how to find, called “Escape,” which I would classify as much more of a non-ending, but it's there.

The Dreamcatcher is a tangle of metaphors; some impenetrable, some painfully obvious. I have no idea why trash was piling up over the place. I have no idea why a giant turtle was plodding its way through mountains of papers. I have no idea why the bathroom was mysteriously locked until the final moments of the game. And the artifact the game is named after is accompanied by no other discussion of Native American culture whatsoever, making its inclusion to be at best another vague metaphor, and at worst a case of misguided cultural appropriation. On the other side, the symbolism of hiding in a maze of cubicles trying not to be seen by giant monsters looking down with spotlight eyes, making your way toward a gold elevator containing a reward for “Perfect Attendance” is so hard to miss it might as well be a political cartoon.

Despite the ambiguity, however, I think the game has something very interesting to say. It's unquestionably about the Freudian interpretation of dreams – how your dreams are the place where your repressed desires are allowed to flourish in safe and abstract ways. But the flaws in that model are equally present in this game. Anything as abstract as a dream can really be interpreted in an infinite number of ways. Like an abstract painting, you see what you want to see. 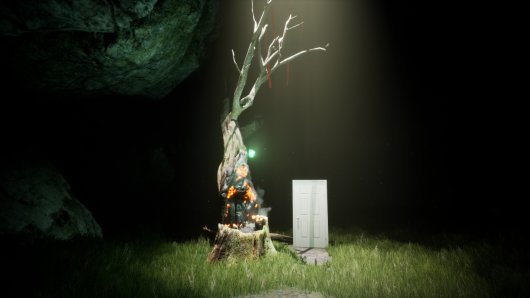 I think I know what this game is about. However, there's so much symbolism that there could be a thousand things intended by the designers that I straight-up missed. For all I know, the game could be a metaphor about capitalism or World War II or bunnies or how good popcorn is. Absent anything concrete to grab onto, a collection of symbols can be whatever we squint our eyes and tell ourselves they are. In other words, an over-abundance of meaning can be the same as no meaning at all.

Then again, I do have to allow that maybe I'm just too stupid to get it. But as someone who went in specifically looking for meaning, took notes at every turn, and spent days contemplating the experience afterward, to only come out of it with a passing understanding of what it was all about is rather disappointing. And while there's certainly a deeper idea to unravel – or at least explore – it's hard to call it a “story.” It's much more like a series of moments with little snippets of narrative and the barest structure of continuity.

Even without any clarity, however, or anything much in the way of gameplay to tie it all together, I did find The Dreamcatcher engaging, but it surely will not be that way for every player. The typical question of “is this game fun?” honestly doesn't apply here. Instead, consider the experience of listening to a strange concept album where you like the groove of the music and grasp some of the meaning in the lyrics, but ultimately must admit that most of it doesn't make sense. If you'd like to replicate that experience in gaming, then perhaps the two hours of surreal psychoanalytical adventuring here is something you'll really dig.

The Dreamcatcher is a mysterious and at times thrilling stroll through gorgeous scenery with a lot of passing ideas that may stimulate your imagination, though don’t expect this surreal exploration of the subconscious to always make a lot of sense or offer much to do along the way.

GAME INFO The Dreamcatcher is an adventure game by Huanlin Games released in 2020 for PC. It has a Illustrated realism style, presented in Realtime 3D and is played in a First-Person perspective.

What our readers think of The Dreamcatcher