continue reading below
»   Home  /  Articles  / Reviews  / Lucifer Within Us review

Lucifer Within Us review

Contrary to the popular Hollywood portrayal of exorcists engaging in knock-down, drag-out spiritual combat with the Prince of Darkness, in the real world an exorcist’s job—in most Christian doctrines, at least—is usually quite prosaic. While dogma holds that direct engagement with demonic entities is possible, Church-trained exorcists spend much more time on investigation, fact-finding and psychological profiling than they do on smacking the Adversary back to perdition. Despite that, Lucifer Within Us is the first time I’ve seen a tale of demonic possession framed as more of a detective story than a work of horror fiction, and in retrospect that surprises me; it’s one of those ideas that seems so obvious after the fact that I still can’t believe it hasn’t been done more often. The notion of an exorcist who’s more Philip Marlowe than Father Merrin seems tailor-made for adventure gaming, and Lucifer Within Us uses that framework to present an engaging whodunit with gameplay centered on an intuitive and enjoyable investigative mechanic. It’s just a shame that it seems to be in such a hurry to get from beginning to end; with only three “cases” and five hours of actual gameplay, I felt like the credits started rolling right as I was beginning to settle in.

Lucifer Within Us takes place in a high-tech world ruled by the powerful Church, a Christian-esque faith that worships the benevolent deity Ain Soph. Humanity has enjoyed both a spiritual and technological golden age for more than a century, ever since the blessed St. Walpurga gave her life to banish Lucifer and his daemonic legions to the Aether. In that time, the Church has flourished and humanity has grown ever more technologically adept, with cybernetic enhancements and Aether-powered devices becoming increasingly common. This peace is maintained in large part by the Church’s Inquisitors and exorcists, whose task it is to guard against the daemons’ return by investigating any incident with a hint of their influence. Players take on the role of Sister Ada, a young exorcist called upon to investigate the sudden violent demise of a prominent priestess. Signs point to this being the first murder committed in 111 years, which could only mean a daemon has been loosed in the world. It’s up to Ada to stop the incursion before it can gain a foothold.

The game throws you directly into the action, opening at the crime scene as Inquisitor Vergil (a sort of holy lawman) briefs Ada on what’s happened. From there it’s off the races, as you hear witness testimony and examine the area for clues. Each new piece of information you acquire—whether it’s an environmental detail or a character’s account of their movements—goes into Ada’s notes, which function as a de facto inventory. Hearing a character’s version of events places a timeline of their story at the bottom of the screen, with markers corresponding to each action they claim to have taken; this allows you to question them or others about their story, beat by beat, and to contradict them with evidence that might force them to modify what they’ve told you. Successfully identifying a falsehood or inconsistency lets Ada use her cybernetic enhancements to see inside a suspect’s “Sanctum,” a virtual construct representing their psyche. Doing so lets Ada see the parts of their personalities they keep hidden, and can reveal markers of a daemon’s presence. 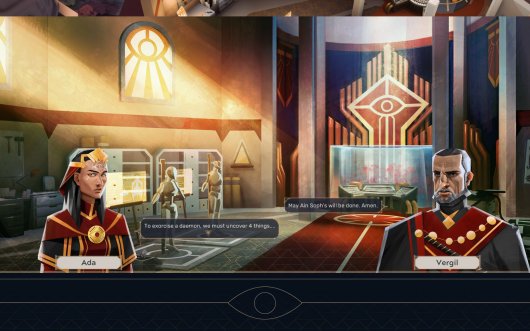 You play from a third-person isometric perspective with a bird’s eye view of the area you’re investigating. The 3D graphics are effective if unremarkable, and while the locations you visit—a cybernetics workshop, a graveyard, and a chapel—are clearly laid out and easily navigable, they’re not terribly detailed. The in-game character models, too, are mostly featureless; your best look at the cast comes from the hand-drawn portraits that appear alongside the intermittently voiced dialogue captions. Like the graphics, the voices mostly get the job done without being terribly noteworthy, the one standout being Fryda Wolff as Ada, who portrays the young exorcist with a steely edge that can’t quite obscure her vulnerable idealism. That said, the way several characters pronounce key terms differently creates a needless distraction. (Note to any voice directors reading this: that’s an “E” sound in words like “daemon” and “aether,” not an “A.”) It’s also never clear why some lines are voiced while others aren’t.

There are three cases in total for Ada to solve, beginning with the priestess’s untimely death and proceeding from there. You’ll accomplish everything with a single click of the mouse, whether it’s moving, talking to characters, or examining hotspots for evidence. Your notes are organized in a series of tabs at the bottom of the screen corresponding to character files, environmental details, and psychological data gleaned from witness Sanctums. The various suspects’ timelines are stacked one on top of the other, allowing you to compare them and keep track of who claims to have been where at what time. You can question a witness about any evidence in your notes, no matter how inconsequential it may seem; one character’s seemingly innocuous answers about a bit of scenery can sometimes grant you the information you need to poke a hole in another’s story.

Much of the game is thus spent talking to other characters. The first time you speak to someone they’ll automatically relate their version of events while a cutscene recreation plays out on-screen; afterward you’ll have free rein to pause, play, or skip forward and back through their story to focus where you want, as it remains in your notes in perpetuity. There are no dialogue “choices” per se, but hovering the cursor over any of your notes will produce an “Ask” button that lets you present it to another character. 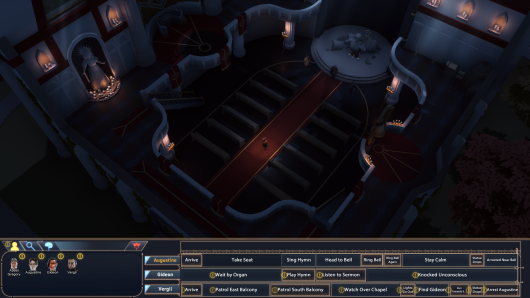 To narrow down suspects, you’ll have to first contradict falsehoods when you find them. Selecting “Contradict” prompts you to present your evidence that a character is lying, which you do by dragging its icon onto that which you want to refute. A successful contradiction usually opens that character’s Sanctum for you, though they’ll sometimes persist in declaring their honesty. As a mechanic, the character Sanctums are more than a little disappointing; they’re described as virtual constructs representing a person’s identity, and it’s implied that an exorcist can actually wander around inside to uncover secrets, but in practice all that happens when you gain access is a bit of text proclaiming that you’ve done so, followed by the immediate revelation of whatever information Ada uncovered there. There’s not even a description of what it’s like inside; as both an aspect of Ada’s society and as a gameplay element, it’s left almost entirely unexplored.

Once you think you’ve identified the culprit you can accuse them and lay out your case. To make an accusation stick, you’ll have to prove a suspect had a motive, an opportunity, and the means to carry out their crime; correctly identifying all three will allow you to call out the daemon you suspect is pulling their strings. (There’s no penalty for getting either your accusation or the daemon’s identity wrong; you can guess as many times as you’d like.)

The process of investigation is the game’s greatest strength. Environments are littered with clues to gather, and you’ll have to pay close attention to each suspect’s testimony to spot inconsistencies or impossibilities. The puzzles all revolve around using your deductive reasoning to determine what’s true and what isn’t; a statement you can’t refute could be true, but you might just not have found the clue you need yet. Evidence-gathering is simple and intuitive: clicking something in the environment stores it away in Ada’s memory along with a brief description of what she saw, with no need to ever examine the original again. The interface is simple to use and allows for easy combining of clues when issuing contradictions or accusations. Quite simply, investigating is fun, and it’s immensely satisfying to ferret out the truth from a multitude of falsehoods. 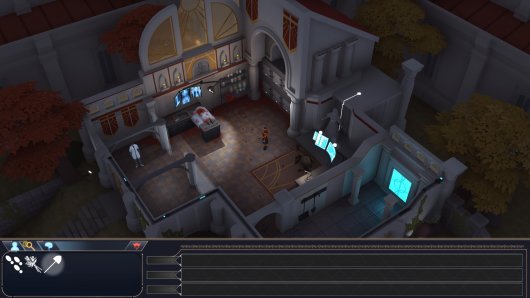 It’s a shame, then, that there are so few cases to play through. The plot doesn’t get much room to develop; for as much thought and effort that seem to have gone into creating this unique setting, we spend precious little time with it. Each case takes about an hour and a half to finish, and none features more than a room or two to investigate. Ada’s society is fleshed out extensively through dialogue, with much attention given to the history of the Church, the development of its advanced technology, and the role of the mysterious Aether. The scenarios, however, are sparsely populated, with only your suspects and the Inquisitor ever available to speak to; worse, everyone under suspicion in the third case is someone you’ve met in the first two, shrinking the world even further.

The game’s painfully small scale is nowhere more evident than in Ada’s daemonic codex, which is a database of Church knowledge for identifying her targets. This could have been a fantastic tool for fleshing out the world and for setting up puzzles that required ruling out daemons from a field of possible culprits; instead, with a grand total of four barebones entries, the codex feels ridiculously underdeveloped from both a storytelling and a design perspective. As each daemon bears a descriptive title like “the Vengeful” or “the Proud,” your current target becomes obvious the second you uncover revenge or pride as a motive, and even the worst detectives will have a one in four shot of guessing. It’s a sour note of missed opportunity in the otherwise excellently designed investigative process.

With so much going on in the world, it feels like a much larger story is being set up than what ultimately transpires. It’s disappointing to only get to spend a few hours in such a distinctive setting so full of history, culture and new technology. From start to finish I was itching to go out and explore, so it’s too bad the opportunity never presents itself. That’s not entirely a failing, though, as I legitimately wanted more of what the game had to offer: the gameplay is satisfying, the puzzles are well-designed, and the central conceit is engaging. What there is of Lucifer Within Us shows enough promise that I would happily return to see and do more, and if there’s a sequel in the cards you can be sure I’ll look forward to it.

Lucifer Within Us shows a lot of promise, with a creatively imagined setting and a unique take on its subject matter, but this tale of daemons and detective work seems so determined to cross its own finish line that it never feels fully realized.

What our readers think of Lucifer Within Us

A terrible waste of a great game

After finishing the very promising demo in the Gamescom week I left impressed and picked up Lucifer Within Us at the earliest opportunity. Sadly the demo turns out to be almost a third of the... Read the review »