Review for Krystopia: A Puzzle Journey 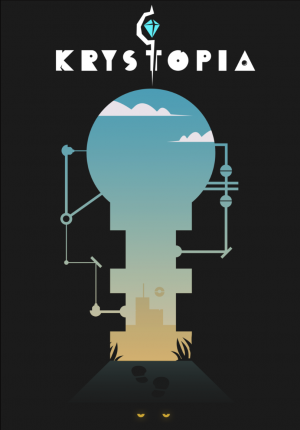 If you are a fan of science fiction, or perhaps a lover of adventures set at sea, you will know that the first duty of any captain, whether on a starship or a naval ship, is to respond to a distress signal if at all possible. Playing as a salvage operator named Captain Nova Dune, you receive such a signal and need to investigate in Krystopia:  A Puzzle Journey. Of course, as usually happens, what should have been a ten-minute operation turns out to be much more. As you set foot on a strange and vividly illustrated alien planet, you will soon become involved in a mystery that will require thorough exploration and lots of puzzle solving, though you’ll likely be craving a bit more variety long before the end.

Players are first treated to a brief but very well-done opening cinematic, accompanied by an appropriately dramatic soundtrack, of the protagonist unlocking a huge door with a crystal key. This is followed by a comic book-style sequence and narration that sets the stage for the story to come. A brief tutorial then covers the basics of the interface: gameplay is entirely mouse-based, with the left button used for movement and interaction with the environment, and the right button, when held down, used to pan around each area you visit. A backpack sits in the top left of the screen that keeps track of data crystals and relics you will collect along the way, the number of which varies per chapter, while an icon at the top right allows you to manually save your game and return to the main menu.

Krystopia is split into four chapters, each one self-contained. Progress is tracked as a percentage as well as the found vs. available items. While you need to overcome all the puzzles in each chapter to progress, you can finish with fewer than all the available data crystals and relics, and therefore a less than 100% score. You can revisit any chapter, but this is not necessary to complete the game. In my playthrough, I felt compelled to go back through any chapter that still had items remaining to get a perfect score, as I wanted to make sure I did not miss any key story elements. There are Steam achievements for finding all the data crystals and relics, but no extra goodies in-game. 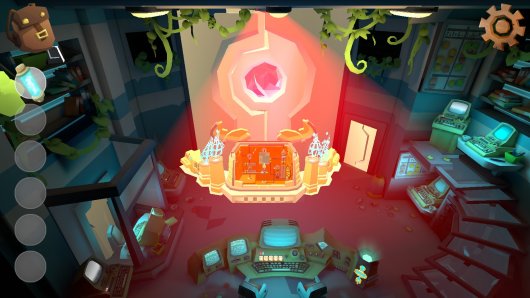 As its title suggests, this is primarily a puzzle adventure with just a hint of a backstory revealed as you explore. Initially you’re eased into the gameplay with very straightforward challenges. The first level contains just two puzzles: one involving matching patterns and the other aligning a path for a laser to charge a crystal and release a lock. Once solved, a door opens to the next level. A very satisfying sound effect will play at this point, which you will certainly come to eagerly anticipate when you tackle the more advanced puzzles in later chapters. As the difficulty ramps up, you’ll need to solve multiple puzzles in multiple locations, some of which are interwoven, to successfully complete each level.

As you progress, you will see footprints on the ground that help with navigation, particularly later in the game when more scenes become available in each level and it is easy to forget which doors you have already opened and where they are. Although there is no change in the cursor to indicate a hotspot, nor is there a hotspot highlight feature, it is usually obvious where to focus within the current level to uncover a puzzle or discover a hidden item location. To do this, you simply click on an area of interest and the camera will zoom in if it is an active spot.

(When watching a video playthrough on an iOS device, I observed an anomaly that activated an AR puzzle that used the camera in the player’s smartphone to simulate artificial reality. This does not appear to be available in the PC version so I did not experience it first-hand, but if you are playing on a mobile device this may be something you will encounter.) 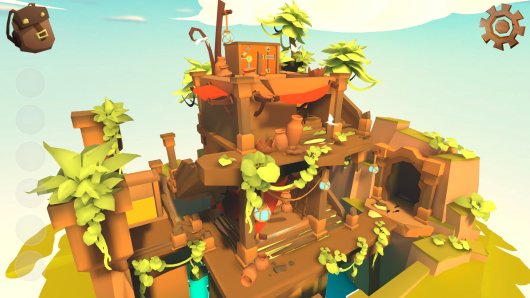 You will be confronted with many puzzles to solve along the way, and here is where I had a mixed experience. While various types of puzzles are included, such as uncovering key cards to access important areas, figuring out the proper combination to different locks (both numeric- and glyph-based), completing a concentric ring picture, and solving Sudoku-like challenges, overall there is an over-reliance on pattern-matching and laser-direction. Don’t get me wrong: they are used in creative ways, such as having to search a level to find various patterns used to unveil power crystals needed to solve a larger puzzle, but they start to feel repetitive.

The main puzzles can become as difficult as they are inventive. One laser obstacle requires no less than fifteen moves to activate and rotate the various elements in the correct order. Some puzzles of this complexity offer a hint via a question mark in the top right corner, but this just shows the completed state so I did not find it very helpful. I had to resort to a walkthrough to solve the most complicated puzzle, even with the hint provided. Still, while I had lots of fun working my way through the chapters and I appreciated the challenge, a certain sameness to so many of them increasingly diminished their enjoyment.

The vibrant first-person graphics are striking, with almost fluorescent colours in each level. While they are not highly detailed, there is enough definition to easily identify potential hotspot areas to investigate. Other than the opening cinematic, which depicts a desert planet filled with rocks and sand dunes, you see very little of the outside world. The starting location for chapters one and two are presented as isometric “islands” with no background features outside of the play area except for the sky, while chapters three and four start indoors. It is clear in each, however, that the civilization that once lived here was quite advanced, with numerous computer terminals, robots, electronic keycards and lots of advanced gadgets. 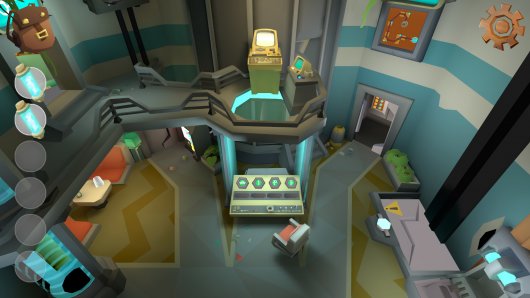 The full screen is used whenever you enter an interior area, comprising lounges, computer workstations, a kitchen, bar, and more. Animations are sparse but used effectively, especially when you solve a puzzle and activate something, such as a tower rising from the ground or a turret spinning above the terrain. Once you have unlocked a door, a slick animation shows Nova walking through and arriving at the next location. I found this a nice touch, as opposed to a basic transition or load screen leading to the new level. This occurs throughout the game and never gets old.

Music is subdued, with emphasis on the beginning of each chapter giving way to soothing synth tunes during gameplay. Sound effects are very well done, with convincing laser beam hums, stones grinding as you move them, clay pots breaking when you click on them, and background effects such as water running, doors opening, and wind rustling. The story evolves over time as you make new discoveries, whether relics such as tools and maps to provide cultural background, or data crystals, which are diaries between a brother and sister. Unfortunately, while chapter introductions and relics are fully narrated by Katie Gaskin, a talented actress if a bit too bubbly for my liking, data crystals are not, which leads to a lot of reading, as there are many to be found and several are quite lengthy. 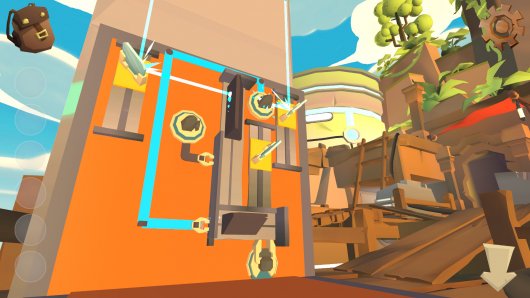 As you piece all these bits of information together, you will begin to reveal a deep, dark history of the planet. The data crystals share the tale of Nix, who is rebellious and wants to learn more about his world, and Nitha, his little sister, who clings to the old traditions and fears her brother may be getting into big trouble. As the story unfolds, you discover that both Nix and Nitha became outcasts from a matriarchal society ruled by someone known as “the Oga,” who seeks to suppress their view of the world. In later chapters, you’ll find out that an alien civilization has landed on Krystopia to mine its crystalline plants as a powerful energy source. A symbiotic relationship apparently formed between the visitors and natives, but there are hints that things have really changed for the worse. The narrative is purposely ambiguous and leaves you hanging, albeit on a dramatic high note that nicely sets up a sequel.

Overall, I enjoyed my five-plus hours to finish Krystopia:  A Puzzle Journey (and another two to go back and get a 100% score), especially the very challenging parts near the end, though a better balance of puzzle types would have made the experience feel far less repetitive. I also found it a bit of a chore trying to figure out exactly what was going on plot-wise. Since some of the data crystals and relics can easily be missed as you explore, it is possible to finish the game without a complete picture. And yet I’m intrigued by what I’ve learned so far, so I look forward to the next game in the series, Nova’s Journey to hopefully to tidy up all the loose ends.

Krystopia: A Puzzle Journey is available at:

Krystopia:  A Puzzle Journey will keep you busy largely solving laser-redirection and pattern-matching puzzles on an intriguing alien planet, but fatigue may eventually set in when facing the same mechanics over and over again.

GAME INFO Krystopia: A Puzzle Journey is an adventure game by Antler Interactive released in 2019 for Android, iPad, iPhone and PC. It has a Stylized art style, presented in Realtime 3D and is played in a Mixed perspective. 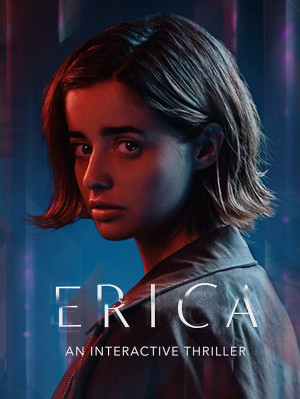 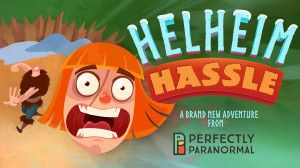 What our readers think of Krystopia: A Puzzle Journey