After getting my VR headset, I messed around with a few games and was still trying to wrap my head around the basics of virtual reality: the way that any direction I looked, I was surrounded by a room that wasn't my own. If I looked down at my hands, there was a pair of simulated hands doing everything mine were, but they weren't my own. I was living in the future and I was already astounded. And then I picked up A Fisherman's Tale and my mind basically exploded.

You play as Bob, a wooden fisherman puppet belonging to a lighthouse keeper, going about your daily routine as your maker is off on a fishing trip. The early stages take you through brushing your teeth, tending to your trinkets, and then working on a small model lighthouse with a little you inside of it to while away the time.

So, to summarize: you are a puppet in a lighthouse who keeps a puppet of yourself in a model of a lighthouse. Have you ever heard the theory of an infinitely recursive universe? If you can replicate a perfect model of your world, could it be that your world is a model itself inside another world? What I'm hinting at here might seem like a major spoiler, but it takes place only about 5 minutes into a 90-minute game, and in order to truly talk about this game I will need to break that wall. 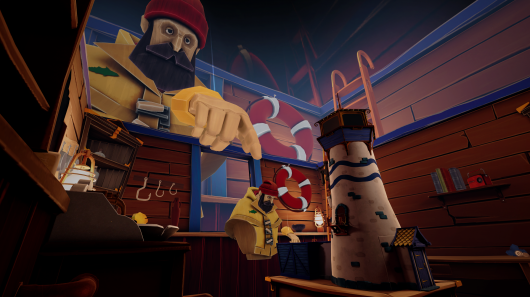 The first day finishes uneventfully but on the second day something changes, as you discover that the window of your lighthouse has been boarded up. You pry the boards off and look outside, but instead of seeing the ocean, you see . . . a larger version of the room you're in. And inside it? A larger version of a fisherman puppet. You are compelled to turn around and look at your own model lighthouse, and when you lift the roof off, the roof above your head is lifted off by . . . you – the bigger you in the world outside.

This then becomes what A Fisherman’s Tale is about. You are a mid-point, interacting with a smaller version of your world in front of you and a larger version of your world outside your own, with each action directly impacting your own as a result. If you place small objects inside the model lighthouse, they are similarly placed in yours but appear twice their original size. If you throw large objects out your window, they reappear at half their size on your floor.

This is the fundamental idea that the game plays with for the rest of your adventure, and what all the subsequent puzzles revolve around. Through a crackly radio, you hear that your creator, the lighthouse keeper, is caught out at sea in a bad storm, and you resolve that if he's going to survive, you must make it to the top of the lighthouse and light the lamp to guide his way home. What follows is basically a series of escape rooms leading you to that end. 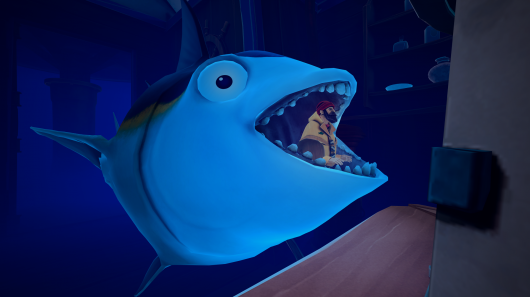 The background narrative plunges into the relationship between the missing lighthouse keeper and his fisherman father, who talks to you from beyond the grave through a painting come to life on your bedroom wall. It seems he was always disappointed that his son never followed in the family business, but it all feels a little light. The game ends with a revelation you've seen a thousand times before in movies and TV shows, but this isn’t a major issue, as the story here is mainly just a venue for the puzzles. It’s certainly serviceable in its own right, but far from the main focus.

The mechanics are very familiar if you've played in virtual reality before, and are executed competently in a way that feels fairly natural. I stood while playing A Fisherman's Tale on an Oculus Quest, but the game also offers a sitting option. Your controllers simulate two hands with which you interact with the world. You can pick things up, wave them around, knock them together or – at least theoretically – solve puzzles around the room with them. You traverse the area by holding in a trigger, pointing to a spot on the floor, and releasing to teleport, or spin around by moving the joysticks if you can't physically turn in your space. You can look around in all directions, and your big and little doppelgangers above and below mimic each action.

What this game does best is finding creative ways to explore the VR space. There are sequences that twist your brain around as you struggle to solve spatial puzzles in a reality with its own bizarre logic. You may discover a key that's twice the size of a lock, or find a hole in the wall that's far too small to enter at your current size. Things like a leaky faucet might cause more drastic effects than you'd expect when the water is one volume in one room and three times that amount in another. If this were a game you were viewing on the flat monitor of a computer screen, my guess is that you'd breeze right through each puzzle without a thought. But being surrounded by a fully 3D world in the middle of other worlds with different proportions somehow makes you have to stop and strain your mind to reach for solutions. Especially in a nearly overwhelming final sequence where you must guide smaller, mirrored versions of yourself around a room. 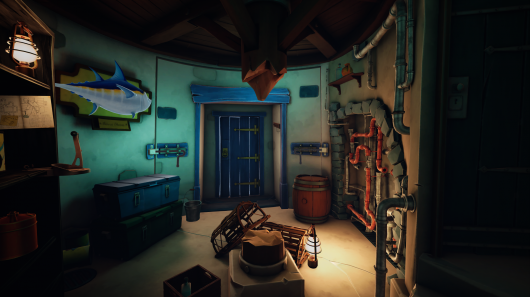 Despite being limited to the one location, the game world is a delight to look at. The lighthouse feels majestic and lovingly crafted, much of it conveying the coldness and isolation of an aging structure in the middle of the ocean through the crooked wooden boards and sparse, old-looking knickknacks adorning the walls and shelves. Contrarily, when you make your way to the bedroom, it elicits a sense of warmth and lived-in humanity. And even these somewhat cramped settings undergo huge changes as the story moves forward to keep the experience from feeling claustrophobic. While I understand that VR hardware limits the graphics somewhat, I still had a great time just looking around each room. Helped by a cinematic soundtrack and exemplary voice acting, the tone is consistently note-perfect, giving you the sense that you're the central character in a Pixar movie. Once you've completed the game, it allows you to live in the credits scene for as long as you wish, and I literally laid on the floor and stared up at the 3D-rendered sky while I digested the experience and it almost felt like I was there.

The feeling of immersion I experienced the first time through the game, unfortunately, was much more muted the second time around. Because for all its charm and warmth, I think I overlooked a couple key flaws originally simply because of my newfound excitement for virtual reality itself, but on replaying they were noticeable and even a little grating.

The first issue is that you’re being spoon-fed information constantly. There is a hint feature available, but even with the hints turned off it feels like the game is impatient for you to keep the story moving. There is a narrator that sounds something like Jacques Cousteau, who speaks to you every few seconds. He leads you through the tutorial and the basics of the narrative, but he also hurries you along in each scene. Even when the game isn't specifically telling you how to solve its puzzles, it seems to be obsessed with reminding you that you have puzzles to solve. 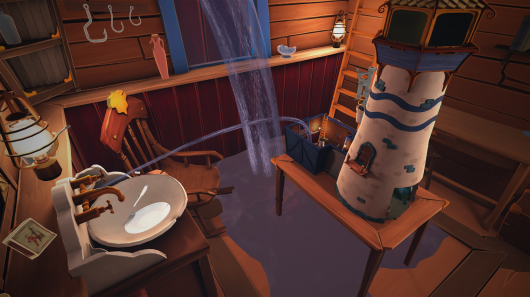 My second complaint is that while there are lots of objects to play with in each space, unfortunately many of the physics don't work as expected. There is water, but nothing splashes. There is fire, but nothing burns. There is glass, but nothing shatters. Each object basically has a different sound when you clank it against something else, but that's about the whole of it. There may well be reasons to explain these omissions. You're a puppet. Your surroundings are technically a model. And the game's surreal nature raises the existential question of whether or not any of this is actually real. I can respect such a justification from a story perspective, but it still takes away some of the awe of a VR game to either have your efforts just plain not work or, worse, not even be addressed.

Now, I understand that playground physics aren't the point of every virtual reality game, but it's always a bit disappointing when they don't work. When you combine a pushy narrator with a lot of missed opportunities for – let's call them what they are – virtual toys, it can feel like the game isn't respecting the way you want to play it. You're living in a world with virtual reality. You're surrounded by a room full of objects where there are no consequences to anything you do. Of course you're going to want to throw everything in the room into the water and watch it splash. Of course you're going to want to light your miniature furniture on fire. And even if that's not possible, at least you're going to want to spend time playing in the space without being nagged with, “We better get going!” every 30 seconds.

Even with a few missed opportunities, however, I want to be clear: A Fisherman's Tale is an incredible achievement. It tells a fairly cohesive tale in a beautiful setting while bending the rules of reality to create a memorable and thought-provoking gameplay experience. While I wish it had more awareness of the player's autonomy and allowed more leeway to experiment and explore, it's definitely a must-play for anyone who own a VR headset and enjoys adventure games, escape rooms, or Pixar movies. With its unique setting, vivid art and soundtrack, and even feature film length, I imagine it's a game I'll return to several more times throughout my life.

While falling slightly short of its full interactive potential, A Fisherman’s Tale is a unique experience, lovingly and charmingly crafted with a clever premise, solid puzzles and the poignant feel of a Pixar movie.

GAME INFO A Fisherman’s Tale is an adventure game by Innerspace VR released in 2019 for HTC Vive, Oculus Rift, Oculus Quest, PlayStation VR, Valve Index and Windows Mixed Reality. It has a Illustrated realism style, presented in Realtime 3D and is played in a First-Person perspective.

What our readers think of A Fisherman’s Tale