When the Past Was Around review

A Space for the Unbound

Whether or not games can be considered “art” is a debate that has been ongoing for many years. Roger Ebert famously said that “video games can never be art” but I beg to differ, and When the Past Was Around is an excellent example of an experience with a truly artistic core, not just in its graphics, but in the storytelling too. Puzzles are peppered throughout to drive the tale forwards, although they do not provide much challenge and are not the real focus here. Beautiful and bittersweet, this point-and-click adventure utilises visuals and music to effectively convey a tale that is equal parts joy and sorrow.

When the Past Was Around explores the relationship between Eda and her lover (an anthropomorphic owl), gradually revealing their journey of love and ultimately loss, without the use of any dialogue or text. At the beginning we see Eda, a young woman in a tan fringed dress, walking slowly towards a man in a cage who is composed of nothing but black scribbles, as though someone had angrily scratched out a photo. Interacting with him frees him; a door fades in as the cage disappears, and the scribbled man grasps the handle, inviting us to join them on an emotion-filled journey through past and present.

The next few scenes are in various rooms of the couple’s house; as you investigate, opening drawers, flipping over rugs and prodding potted plants, the scribbled man is soon revealed to be Eda’s lover Owl. What follows is a tour of their memories together: cuddled together on the sofa, sharing an ice lolly on vacation, huddled around a campfire, sitting at the kitchen table enjoying hot drinks. These everyday, almost mundane glimpses into the past emphasise the small daily delights of their lives and love. Sadly, nothing can last forever… 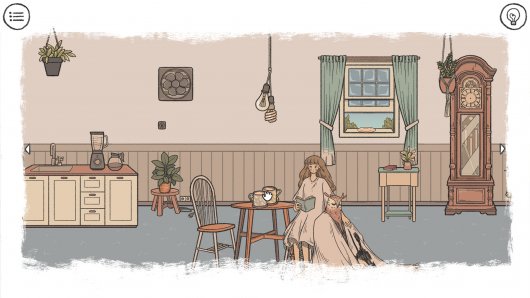 It is the juxtaposition of these tiny moments of remembered joy and togetherness with other scenes that show Eda frantic with worry for her lover, or alone and bereft, that makes the story such a bittersweet pill to swallow. In one memory you see them breaking up a last biscuit to share equally before they calmly hold hands; in another Eda is all by herself, trying to play a tune that’s tied tightly to her memories of Owl, but the notes won’t come out right and she dashes the instrument to the ground in frustration. Watching her reminisce about their love, and seeing her raw expression of pain interspersed between, evoked a joyful sadness even in me.

This exploration of their history is driven forward primarily by solving escape-room-style puzzles. There are lots of keys to find and codes to crack. As the only text consists of a couple of words on objects you discover, the game uses pictures and symbols to point you in the right direction. For instance, in the scene where the couple is sitting together at the kitchen table, images of the drinks they want appear in thought bubbles above their heads. In another scene, out in the garden, a sheet on a clothesline displays birds, butterflies and brooms as a clue to solving the code on a lock nearby. Elsewhere, you need to lure birds to you to pick up the geometric shapes they’re carrying, so that you can open a door and progress the story. Although some of these puzzles are quite inventive, none are particularly challenging.

Many of the problems that need solutions are based around music. As an example, at one point you need to play a tune on a piano, with clues nearby in the form of numbers and shapes (thankfully for the musically challenged like myself, there’s no need to be able to read music to solve any of the puzzles). Music, and in particular the violin, is a running thread throughout the game that serves to tie together many of the otherwise seemingly disparate memories. Our protagonist couple are violinists, and this is reflected in the background score. 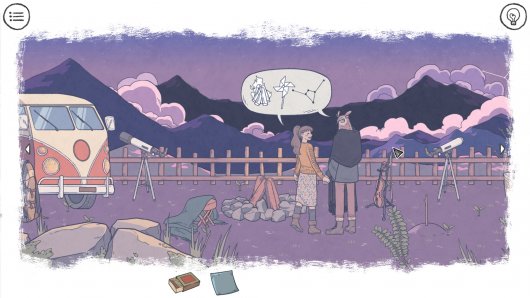 Most of the tracks are variations on a core theme, a memorable tune which itself is cleverly tied to the lives of Eda and the Owl (how they are linked is revealed as you progress through Eda’s memories). At several points, you see notes floating in bubbles; clicking on each plays part of the theme tune. The background pieces are quite beautiful, and are accompanied by realistic sound effects as you interact with your surroundings, such as opening boxes and pushing books aside. Violin chords even play when you hover your cursor over various parts of the screen, including the settings and hint buttons.

The hint button itself (a lightbulb in the top right of the screen) is a hotspot highlighter to show what items you can interact with. It’s always a handy feature to have, but it wasn’t something I needed to use, as part of the fun is thoroughly examining each environment. Interacting is easy and intuitive: moving the cursor to the edges of the screen will pan the camera right or left, revealing more of the current location. The smart cursor will change to a grasping hand if you’re hovering over an item you can pick up; a blinking eye if it’s something you can look at more closely; or a question mark, which in some cases means the item is a clue, and in other cases indicates it is something you will be able to interact with in the future but don’t have the right objects to do so yet. A basic inventory is included at the bottom of the screen, and to use something from it, you simply click, drag and drop it onto the part of the scene you want to use it with.

Clicking on anything in the background causes a joyful burst of white lines to explode from the cursor, like every click deserves its own tiny celebration. When you drag an object from your inventory to something you can use it with, even more white lines appear, letting you know you’re on the right track. These touches fit in well with the overall hand-drawn aesthetic. Even the cursor itself is a triangle filled with scribbles, which has a few frames of animation so that it appears to be constantly shifting. The screen edges are done in the same way, looking like the smudged edges of a painting, again animated so they’re in constant motion. The backdrops and main characters are strikingly beautiful – this game is an absolute pleasure to look at, possessing a fairly unique art style reminiscent of an elegantly drawn cartoon, with detailed backdrops painted in an array of muted colours. The characters’ animations, including in the handful of comic book-style cutscenes, are a little basic, creating the feel of a flipbook. 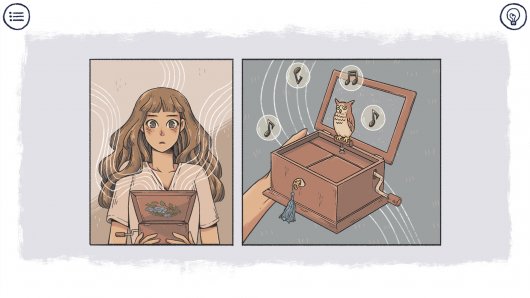 Some of the cutscenes serve to connect the game’s six chapters, all of which have suitably poignant titles (such as “When I Found You” and “When the Day Arrived”) and have a small number of scenes to explore and puzzles to solve. Unfortunately, it doesn’t seem to be possible to manually save the game, and the autosave feature appears to only record progress once you have completed a chapter. I exited the game mid-prologue, and returning to the game and clicking “continue” on the main menu took me back to the start of that chapter, which was somewhat frustrating. That said, the full game is a rather short experience, with between one and three hours of playtime depending on how leisurely you approach it, so the chapters themselves are quite brief.

Within most of the chapters, it’s possible to move back and forth between scenes (the memories are connected by mysterious doors that take you from one echo of the past into the next). However, it’s not possible to move Eda around each scene, which does lead to a slight feeling of disconnectedness, like you’re some kind of silent voyeur or floating poltergeist, looking in on this couple’s life, knocking over plant pots and sweeping books off shelves. I felt this reduced the emotional impact of the experience somewhat; if we were able to feel more like we were playing as Eda, the loss and love she experiences would pack a bigger emotional punch.

That said, When the Past Was Around still manages to tear at the heartstrings, building up to an ending which – much like the rest of the game – intertwines the warmth of love with lingering sorrow. Veteran adventure gamers may not find that the puzzles along the way provide much of a challenge, but ultimately the beautiful visuals, captivating music and emotional story are well worth the price of admission.

Beautiful and bittersweet, When the Past Was Around is a brief but touching point-and-click adventure with simple puzzles that tells a tale of loss and love through gorgeous hand-drawn graphics and elegant, memorable music.

GAME INFO When the Past Was Around is an adventure game by Mojiken Studio released in 2020 for Mac, PC, PlayStation 4, Switch and Xbox One. It has a Stylized art style, presented in 2D or 2.5D and is played in a Mixed perspective. You can download When the Past Was Around from: We get a small commission from any game you buy through these links.
The Good:
The Bad:
The Good:
The Bad:

What our readers think of When the Past Was Around