Nelson and the Magic Cauldron 2: The Journey

In Eternal Hope, Brazilian studio Double Hit Games brings us a gorgeous platforming adventure in  which a boy named Ti’bi must travel across a postapocalyptic land to save the love of his life. Very much in the mold of LIMBO or INSIDE, this 2D side-scroller offers an enjoyable experience through its impressive presentation, clever dual-dimension gameplay, and simple yet beautifully told story, which combine to far exceed any minor inconveniences.

The game’s prologue is pretty straightforward in establishing the setting and main goal. It introduces us to Ti’bi, a lonely humanoid-like creature who one day encounters a girl of the same species and the two of them fall in love. Sadly, after a few years of happiness the girl dies in a tragic accident. Disheartened, Ti’bi’s mourning is interrupted by a mysterious voice. Introducing himself as the keeper of souls in that realm, he explains that the soul of Ti’bi’s beloved was shattered when she died, affecting the order of things and weakening him in the process. In exchange for Ti’bi gathering the pieces of her soul and taking them to his temple, the keeper promises to revive her.

The gameplay itself is quite basic. Using a keyboard (or a joystick if you prefer, since they both work fine), you move Ti’bi and make him jump with the directional arrows, while a single key or button is all that’s needed to have him interact with his surroundings, whether pulling, pushing and grabbing objects, or reading the stone tablets left around by the beings who used to inhabit this world. After the first few levels, another gameplay mechanic is introduced, which is using Ti’bi’s scarf as a parachute. Not only can it prevent falling to your death from great heights, it’s also a way to ride wind currents blowing upwards. 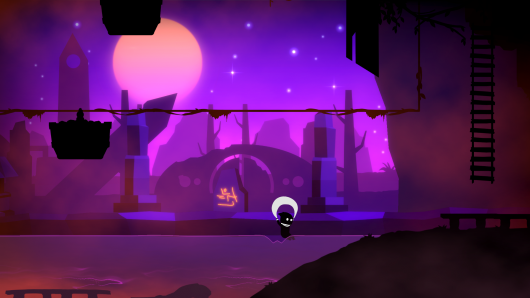 Most of the puzzles involve finding ways to deal with obstacles preventing Ti’bi from reaching the soul fragment at the end of each level, such as doors, debris, water or other creatures. This means exploring your surroundings to find the elements to interact with in a specific manner to unblock the way. For a simple example, you might sometimes need to find a box or a rock to move towards a platform in order to activate a switch that opens an entrance. But other times it gets trickier, like figuring out specifically how to move across a hallway while avoiding being crushed by a giant skeleton or being eaten by a large monster.

In order to do all this and collect the scattered soul pieces, Ti’bi needs access to the land of shadows, a second plane of existence. The keeper grants Ti’bi this ability, but only for a short period at a time. Activating this power mildly changes the structure of the current level by adding or removing certain things, so you can accomplish certain tasks in one dimension that you can’t in the other. It also allows Ti’bi to interact with the An’mu, strange creatures who are willing to help him reach new areas that are otherwise inaccessible. After his first experience with this new gift goes wrong, Ti’bi is saved by a passing fairy named Heli, who decides to accompany you on your quest. While Heli doesn’t offer anything gameplay-wise, your new friend provides information and commentary on behalf of Ti’bi, who is a silent protagonist.

The environments you traverse are very pretty. The interactive layer of the screen is almost entirely in silhouette, which contrasts nicely with soft backgrounds of blues and greens, purples and pinks. When Ti’bi accesses the land of shadows, however, the palette shifts to faded, washed-out hues in order to convey that it is a realm of death. The game also features occasional cutscenes that look like a children’s picture book, used to convey the most relevant and emotional parts of the story. Another notable visual aspect is how effectively the character design helps you identify the nature of the characters themselves. If it’s roundish, it’s a friend; if it looks like Satan, it will try to kill you; if it looks like it’s melting, it’s an An’mu; and if it looks like Navi from the Legend of Zelda games ... that’s just Heli, essentially a glowing white ball with butterfly-like wings. 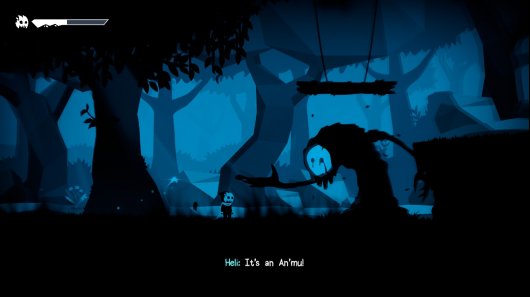 But pretty designs aren't the only things that shine in Eternal Hope. As you travel across a dark forest filled with perils, or the ominous remains of a forgotten city, you are accompanied by a beautiful soundtrack that does a good job of creating the right atmosphere for each scene, like when a slow piano solo starts playing while Ti’bi mourns his beloved. The way the music can gradually transition from a calm melody while exploring a beautiful fantasy land to a frenetic chorus of strings when a giant troll tries to eat Ti’bi, succeeds in keeping you on edge, even when dying doesn’t really have any major repercussions on progress.

Despite the presence of enemies, fortunately the game doesn’t rely that much on reflexes, but rather on the player’s ability to observe and analyze their surroundings. For example, after being crushed by a stone dropped from a cliff, exploring a bit after reviving will reveal a way to protect yourself before that happens. In the levels where I had to deal with enemies, like the corrupted creatures called Umbra that run after Ti’bi when they spot him, learning how they move and behave is crucial to defeating them, escaping from them, or even using them strategically as pieces to solve a puzzle.

Ti’bi respawns at the beginning of the current unsolved puzzle each time he dies, which means that any progress made after that is lost. But you’re never set back too far, and since the puzzles in this game involve a lot of trial and error in order to decipher how to solve them, this autosave system ends up being quite helpful in resetting the elements to try again. The one drawback is for those who like to earn achievements. Most achievements here involve finding the hidden souls within each level, but because there’s no level selection and only four save slots, you’re pretty much forced to replay the whole game in order to get any you may have missed in the first run. 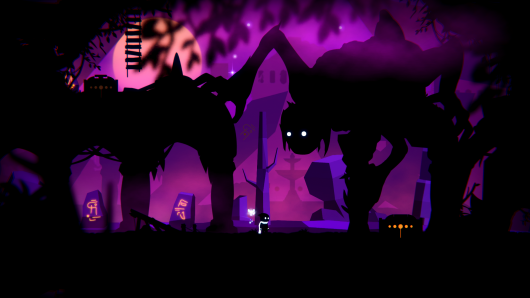 I also encountered some glitches and other technical issues during my playthrough. The tutorial is meant to show which button does what, but it displayed the controller mapping even though I was playing with the keyboard. After that, I came across a bug that prevented me from solving the puzzle I was currently in by making the screen black out every time I reached a certain point, and another where I end up falling outside the screen. Luckily, none of them were serious and could be fixed by going back to the main menu and then booting my save file. The rest of my experience went smoothly.

Figuring out how to solve the different kinds of puzzles was hard sometimes, but I never found it frustrating. Explore, die, learn and try again is key; the game has the perfect balance between length and variety in its puzzles to never become repetitive or tedious. Despite not having any kind of help system, I had no problem reaching the last level in about two and a half hours, only briefly getting stuck a few times toward the end. The last level, however, took me over an hour to complete. The puzzles in this section are more complex, and learning how they work becomes harder since there are a lot more enemies to deal with.

Eternal Hope may not offer anything particularly new or innovative for those familiar with other puzzle-platformers of this kind, but it is a well-made adventure with very little to detract from a very enjoyable experience. It is a bittersweet, occasionally challenging, and always beautiful journey that those looking for a good short game should definitely give a try.

Eternal Hope is a side-scrolling platforming adventure about love, death, and tragedy in a fantasy postapocalyptic land that is as fun as it is gorgeous.

What our readers think of Eternal Hope