Once Upon a Crime in the West

Phoenix Wright hardly needs an introduction: Capcom’s legendary defense attorney has not only starred in animated TV shows, a live action film, and no less than two musicals dedicated to his name, he also has two separate handheld game trilogies, not to mention a few spin-off and crossover titles. The fact that a series of visual novel-styled adventures about questioning suspects and presenting evidence has enjoyed such widespread popularity is testament to the design team’s skill in dreaming up ever more convoluted cases for Phoenix and his cohorts to untangle. With Spirit of Justice, the second trilogy of games is brought to a triumphant close, capping it off with the longest and most satisfying entry yet.

This time around, Wright travels to the kingdom of Khura’in to visit his old assistant Maya Fey, who has undergone rigorous training there in order to become a master spirit medium. Khura’in is in a state of civil unrest, on the verge of a revolution, all stemming from a decision made years ago by the ruling monarchy to enact a new law, the Defense Culpability Act. This law, passed to discourage the suspected unethical practices of crooked attorneys who will stop at nothing to prove their clients’ innocence, compels said defenders to share in the punishment of their sentenced clients, up to and including execution. As a result, the country has become completely barren of defense lawyers, with prosecutors enjoying free, unchallenged rein over the legal system and the number of wrongfully-convicted accused rising steadily.

Of course, it doesn’t take long for Phoenix to become embroiled in legal troubles, as he aids a young tour guide accused of a heinous theft, getting even further entangled in the developing uprising as the game unfolds. Three of the five cases directly advance the story in Khura’in, with the in-between chapters acting as interludes set back in the States. (This game’s specific and repeated reference to Phoenix hailing from America comes across as rather jarring, since, to my recollection, the series has until now been purposely vague about its setting.) Though these other cases feel slightly like filler, they are still fun of their own accord, providing opportunities for the franchise’ other defense attorneys, Apollo Justice and Athena Cykes, to star in the game as well. This is in addition to plenty of other familiar characters from past trials who are given their own cameos: Miles Edgeworth, Pearls, Ema Skye and Simon Blackquill, to name but a few. 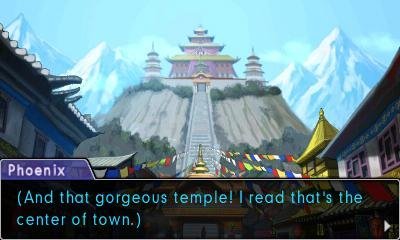 But it’s the Khura’in chapters that feature the most memorable courtroom drama. Spending the majority of the game’s runtime in this one small kingdom enables much more emphasis than usual to be placed on an overarching story, rather than just a slim connecting thread running throughout that pays off in the end. The Khura’inese cast of characters is given far more character development than we’ve traditionally seen in Ace Attorney games, between the haughty crown princess Rayfa Khura’in and the formidable prosecutor Nahyuta Sahdmadhi, who becomes the main opposition in most of the cases.

In Spirit of Justice, we finally learn Apollo Justice’s backstory and his surprising ties to the goings-on in Khura’in, even though some of these revelations feel like they plumb the depths of the coincidence well a bit too much. But by the end, Apollo’s journey comes to an extremely satisfying conclusion, and for perhaps the first time I found myself feeling some genuine emotions of sorrow and triumph, suffering with him through his losses and jumping out of my seat, cheering at his victories, marking this game as the series’ crowning achievement.

As is tradition, gameplay is once again split between investigation and courtroom sections, with some lengthy cases featuring multiple instances of each spread out over several days. The former see players examining a number of locations and talking to the characters encountered there. While this usually starts as light banter that sets the stage narratively, soon enough the gang will come across or get wind of a crime having been committed, and from there you’ll begin to unearth clues, gather evidence, and question witnesses. All of this is very linear, requiring no real skill, and an area can only be left after all important actions have been performed. Eventually, time will move on to the following day, when the trial takes place. Listening to witness statements, pressing them on pertinent points, and presenting evidence to refute or back up their claims is the mantra here. 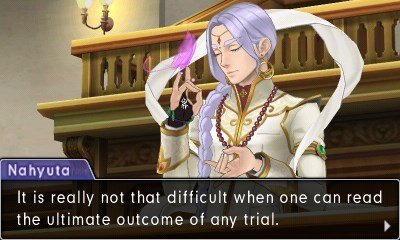 With each attorney sharing time in the spotlight, all of their tricks get a chance to shine, from Phoenix’s magatama that lets him break witnesses’ Psyche Locks, to Apollo’s ring that alerts him to look for physical tells to spot a person’s lies, to Athena’s Mood Matrix that lets her analyze the discord in others’ emotions. Along with dusting for prints and spraying Luminol to search for blood trails at crime scenes, all the familiar mechanics get plenty of screen time here.

Like each game before it, however, Spirit of Justice introduces a new mechanic to keep the courtroom proceedings interesting. The latest addition to the gameplay stable this time is the Divination Séances, rites performed by Princess Rayfa in court. These allow her (and the player) to actually witness a victim’s final moments before death in animated sequences, which have been used in Khura’in for years to instantly seal the fates of the unfortunate accused. On a technical level these segments aren’t much different from what we’ve seen from the series before, but they do require a bit of deduction.

While an animated video clip representing the last things the victim saw is playing, words appear that describe their other senses: what they heard, smelled, touched. During all this, Princess Rayfa’s interpretation – essentially her verbal testimony based on the vision – appears in text form. The trick is to find any inconsistency between the visuals, sensory cues, and Rayfa’s interpretation, then scroll through each individual part until they’re all on-screen at once, and point out the fallacy via stylus tap or by presenting a piece of evidence. Challenging someone’s interpretation of a second-hand vision can get a bit tricky at times, but it’s a welcome addition that keeps the gameplay far fresher, particularly when combined with all the attorneys’ other tricks. 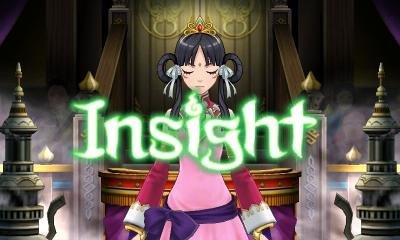 The soundtrack adds a lot to the game’s emotional staying power. With returning characters come familiar musical cues, instantly bringing back many fond memories. New compositions also work very well, with some truly lovely pieces being introduced as the final case draws near and plays out. The opening case takes a very playful approach, incorporating music into its courtroom drama with a melodious monk who plucks his guitar and testifies in rhyme form, only to conjure up two jumbo-sized amps once things heat up, shredding with his axe with some gnarly head-banging heavy metal riffs on the stand. On the other side of that coin, Princess Rayfa’s Divination Séances are always accompanied by a somber song and dance number that sounds authentically steeped in Far Eastern tradition. Cinematics once again feature full voice-overs, as well as short spoken snippets during the actual courtroom gameplay.

Spirit of Justice may be the first time a Phoenix Wright game gave me reason to keep the 3D slider pushed up to its maximum setting. There is so much detail in the animated backdrops, whether a puff of smoke in the Khura’in marketplace or colored ceremonial prayer flags rippling in the breeze on a windy mountaintop, which make it worth the extra battery life to view them in their full vibrancy. In one of the DLC cases available, a particular character takes advantage of the 3D effect by folding and sending a paper airplane flying directly at the player.

As always, the anime-influenced character models are as varied and unpredictable as possible, with lots of neat nuances to feast your eyes on. The rogue’s gallery of oddballs this time includes a dead man testifying at his own murder trial via spirit channeling; a remote-controlled helicopter drone, complete with fully-functional Gatling gun and loudspeaker module; and an actor slipping into various roles from one line of dialog to the next. Several characters also undergo dramatic, fully-animated transformations mid-trial. 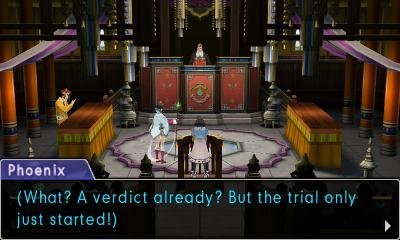 At over forty hours, there is a lot of game to enjoy in Spirit of Justice alone, but it can be further extended with extra downloadable content, including one lengthy case involving a time-traveling murderer that is as convoluted as anything we’ve seen in a Phoenix Wright game proper.

While Spirit of Justice adds a few new twists to the established Ace Attorney formula, it’s really Capcom’s incredible imagination that is the true star here. Cases are as twisted as ever, if not more so, with one late-game reveal being so out of left field that it gave me some serious trouble even conceiving of it, never mind presenting the appropriate evidence to propose it to the court. But more than anything it’s the storytelling that’s been dialed up to eleven, giving Apollo a worthy story of his own and serving as an epic conclusion to the trilogy, providing fans with an emotionally-charged send-off that won’t soon be forgotten.

WHERE CAN I DOWNLOAD Phoenix Wright: Ace Attorney – Spirit of Justice

Phoenix Wright: Ace Attorney – Spirit of Justice is available at:

It’s hard to find much fault with Spirit of Justice. Dramatically improving upon its predecessors’ storytelling and varying the familiar gameplay elements, this game gives the trilogy – and series, for now – a more-than-polished conclusion that engages the brain as well as the heart.

GAME INFO Phoenix Wright: Ace Attorney – Spirit of Justice is an adventure game by Capcom released in 2016 for 3DS, Android, iPad and iPhone. It has a Stylized art style, presented in Realtime 3D and is played in a First-Person perspective.