Please Knock On My Door review

You wake up. You already feel tired and just want to stay home. You know you have to go to work. You know you have to eat. It’s too much bother to make anything. You should reply to the chat on your computer. You know Amy has seen that you’re online. What do you say? Can you form the words to convey how you really feel? Why is everything so difficult? Why are you so tired?

Michael Levall’s Please Knock on My Door isn’t your average adventure game. There’s no grand quest to save the kingdom and defeat the evil dragon. Instead, it is about the inner dragon of depression and how it affects the everyday life of the protagonist, an ink-black character who resembles a Minecraft figure, with very little expression except what is amazingly revealed through the two square white eyes. You aren’t given a name, possibly as a means of helping you see yourself as the main character, since this is meant to be a very personal experience. In fact, the subject matter is so somber and honest that it might not be suitable for some people. I have suffered from depression in the past and some moments of this game really hit quite close to home. For those who can handle the inherent discomfort that comes with it, however, this proves to be a thought-provoking and insightful little game.

It’s hard to describe the story of Please Knock on My Door because there really isn’t much of one. Your task is to simply make it through the week. Every day you battle with your inner thoughts, your sluggishness and your apathy as you go through the mundane tasks of life. Wake up, eat, shower, go to work – or not, if you prefer, for all of the above. 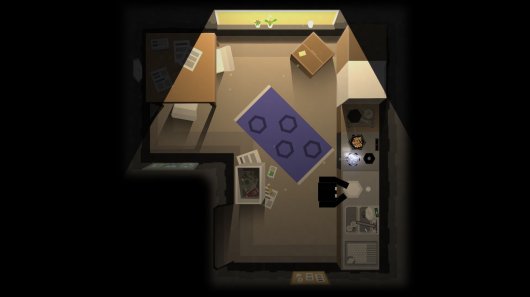 While the character is nameless, there are two voices which you as the player hear and sometimes control. Although speaking unbidden, the voice usually leads to a number of options being made available that you are then able to select. One is displayed as white text and could be described as your best self. This is the voice that encourages you to do things that will help with your depression and reminds you of things you need to do. “Perhaps you’d like to get something to eat” is one of these suggestions at the start of the game. The other voice, displayed as red text, is the depression. This is the voice that tells you to stay at home, because it’s too hard to go to work today. Or that life isn’t really worth it, saying things like “When non-existence becomes preferable to existing with nothing. The thought of finality.” Occasionally that red voice tells the truth, but wrapped up in a way that still works to bring you down. “Whatever happens, your choices are not up to me. They never are.”

Everything in Please Knock on My Door is about choices. Decisions are displayed when you interact with an object such as the kitchen counter to make either a sandwich or a full meal. The choices vary as the game progresses, from the simplistic tasks of eating or showering to the more complicated such as when you have to give a presentation at your work and realise you are missing some of the paperwork you need. In this case, the options are “run back to my desk to look for the missing document” or “assume Will has the document, and wait for him to get here.” Each of these decisions matters.

The text in this game is extremely well crafted. Careful adjective selections really capture the feelings of the main character, while the use of small, sharp sentences highlights the thought process. One scene about halfway through perfectly showcases this excellence in writing. The protagonist is standing outside the large metal doors of his office building, trying to summon the courage to go inside. “My legs feel like iron, my hands dry and cold. The clouds above shift in dark and gray. It’s going to rain soon. I don’t want to take another step forward.” 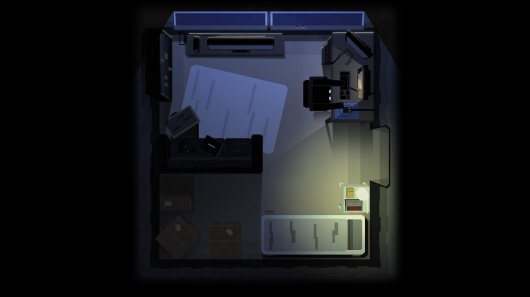 The main task of Please Knock on My Door is to manage your mental health. Every decision and action you take has an effect on your inner well-being. Some give you an immediate increase or decrease such as eating a meal. Others have longer-term outcomes. You’re plagued throughout the game by memories of your past, and are able to make decisions that either avoid those memories, giving you a short-term boost to your mental health, or confront the memories, which may reduce your mental health in the short term but increase it over time. You can also get into a situation where you dwell on memories too deeply, which then has a profound negative effect. Another important decision is whether you engage in conversations with your father and friends.

Each of these choices will end up impacting future decisions. Sometimes if you’ve made too many choices that affect your mental health negatively, you aren’t then able to make any good decisions later, because the options are no longer available. It’s also possible to get into situations where all the outcomes will be negative, leaving you to choose the best of a bad group of options.

All player decisions are tied to a number system that may or may not be visible to you depending on the mode of the game you’re playing. Three modes are available: story, game and experience. The story mode simply allows you to follow events with your mental health numbers not making any difference and all the decision options available to you throughout. In game mode, which is what I played on my first playthrough, you see your mental health statistics, giving you the chance to learn which actions are more likely to help you (looking outside or showering) and which aren’t (not eating or staying awake too late). The experience mode is the same as the game mode but doesn’t show the numbers, although they are still there and being counted in the background. 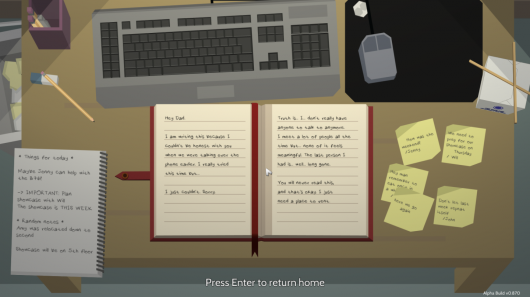 Graphically, the game has a unique top-down perspective that is rare in adventures. Everything is drawn with a minimalist approach and there is not a lot of detail. This isn’t a bad thing though, because the focus is on the choices you make, not on the backgrounds. While most scenes are displayed from above, there are a couple of important close-up screens, such as looking out the kitchen window at the single tree and people sitting on their own. This screen is particularly important as it subtly implies your solitude in the world, although looking out there does give a positive boost to your mental health. There is also a faint reflection of the player character in the window, which was so subtle I didn’t notice it at first. Animations are also minimal, although again this isn’t a problem. Animation is used when needed, like rain through the window or the glow of the television when it’s turned on.

Navigation is handled through simply keyboard controls, and objects of interest are highlighted to be easily seen – a letter through your front door mail slot, for example, or the dishes in the kitchen sink. While most of the game is in third-person, your desk at work is shown in first-person perspective, where you’re able to pick up and arrange post-it notes, use your computer mouse and keyboard, and look through the contents of your desk drawer via simple mouse clicks.

The music is subtle but really sets the tone of the game. Comprised mostly of piano pieces, it is haunting when it needs to be, changing along with the mood of the protagonist and the decisions required at that moment. There are some nice sound effects too, such as the rain outside your apartment and the clicks of turning your computer or television on. The audio element that particularly impressed me, however, was the voices. The main voice is that of the white-text narrator and he reminded me of that soft, pleasing and helpful voice you’d expect from the narrator of a children’s television show. (The same actor is the red-text narrator, with no effort to disguise the similarity, but he’s a bit more sinister in that role.) There aren’t many other voices in the game, but all of them are expertly performed and add to the overall atmosphere. 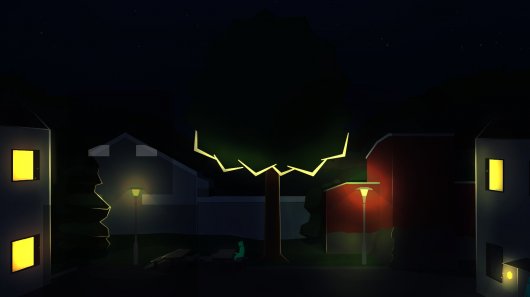 There are three possible endings to the game based on the decisions you make. I played through twice, each taking me about an hour, and my replay presented enough changes and differences that it kept my interest the second time through. I originally got the best ending when playing in game mode, while on my second playthrough I went with the experience mode and got what must be the worst ending. The third ending, which I haven’t seen, I understand lies somewhere between good and bad.

Please Knock on My Door is a game I absolutely loved, but it’s not a game I enjoyed in the conventional sense. Everything in this title works together superbly to evoke dark thoughts and raw emotions that certainly aren’t always pleasant, and sometimes, for me, those feelings hit a little close to home. It’s not all doom and gloom though, as there are always hints of hope and if you make the right decisions and reach the optimal ending, you do see there is light at the end of the tunnel. Everything might not be resolved the way you’d like, but you know life can still be good if you persevere. This is a game that might not be suitable for those who have or are currently suffering from depression, but it will certainly help those who haven’t experienced it to understand, at least in a small way, what it feels like.

Though it certainly can’t be considered fun in the typical gaming sense, Please Knock on My Door is an excellent examination of the everyday reality of suffering from depression. Although a little short, it packs a lot to think about in its brief play time.

GAME INFO Please Knock on My Door is an adventure game by Levall Games released in 2017 for PC. It has a Stylized art style, presented in 2D or 2.5D and is played in a Third-Person perspective.

What our readers think of Please Knock On My Door