Review for Nancy the Happy Whore and the Perfidious Petrol Station

Johnny Hurricane and the Pirates of the Third Reich

Let’s get something out of the way from the beginning: Nancy the Happy Whore and the Perfidious Petrol Station is actually a pretty tame game. Although the star is indeed a prostitute and her best friend is called Susie the Drug Addict, this adventure from indie developer Technocrat provides more wink-wink humour than anything outright titillating. Fortunately, in what could well be the start of an ongoing franchise, Nancy's debut instalment adds up to more than the sum of its parts. The runtime is short, the audio is mixed and some of the retro visuals are lacking, but the cheeky charm in both the dialogue and puzzles help elevate the game to a fairly enjoyable overall experience.

Players take control of Nancy, a lady of the night. She’s confident, self-aware and forthright. The fact that ‘charm’ is one of her inventory items helps give you a sense of who she is. She has more skin on display than clothes; with her ginger hair tied back, short shorts and knee-high boots, Nancy looks the part and often uses her sexuality to her advantage. Agitated feminists need not worry, however, since Nancy is clearly the brightest spark in the whole game. She can get what she wants from people with ease; she just happens to be a prostitute. She teases people with her promiscuity, but her job is never made much of an issue.

The story itself is actually pretty low key. Nancy nearly crashes her car after falling asleep at the wheel, and she and her friend Susie find themselves at a petrol station. The trouble is that the forecourt holds no fuel, so it’s up to Nancy to work out how to get some in order to get back on the road. Of course, it’s never that simple, and the game is split up into three distinct acts. Only the first part is about getting gas, while the rest of the time sees Nancy running into some thieves and discovering an odd underground cult. 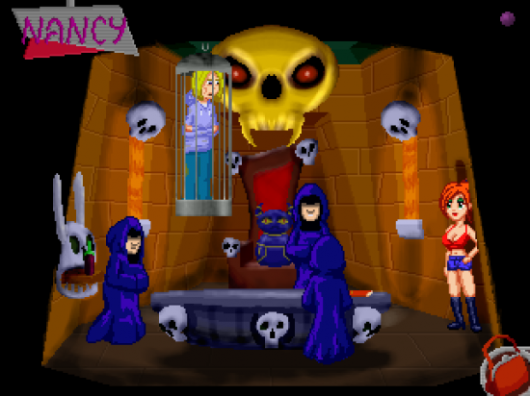 Along the way Nancy will find herself, amongst other tasks, concocting fake marijuana for a nerd, figuring out how to ruin the cult’s ritual and picking off criminals one by one. Although the game is mostly grounded in reality and solutions to puzzles follow suit, there are times where you have to think outside the box. For example, at one point there's a snake wrapped around Nancy and you need to think creatively in order to get it off her. There are a few moments where a simpler solution could have sufficed, however. In one instance you need to collect water from a sprinkler, but the empty bottle in your inventory isn’t accepted as a suitable tool.

While the plot is contained to a fairly uninspiring setting, it’s the cheeky, breezy charm of the writing that really enhances the experience. Although it’s never side-splittingly hilarious, Nancy’s drollness will often raise a smile. And, admittedly, some of the more immature jokes are funny, despite the fact you’ll see them coming a mile off. However, Nancy the Happy Whore is at its best when the unexpected happens. A particular moment involving a falling vending machine resulted in something so unpredictable that the brashness of it brought about a laugh.

The cast of characters are fairly limited. Nancy’s mate Susie is always around, a drug addict who seemingly has little regard for a lot of things. There is a stereotypical nerd (complete with spots, flab and glasses) who lives in a caravan and has made it his mission to find his one true love. He’s bratty and arrogant and Nancy is quick to put him in his place. There’s also a shop worker who is the epitome of boring, barely displaying any personality at all. Disappointingly, the three robbers are only distinguishable visually by different coloured balaclavas. Similarly, the group of cultists all look exactly the same and could be interchangeable. The shining star within the cast is Nancy and it’s a shame that everyone else isn’t as well-defined as she. 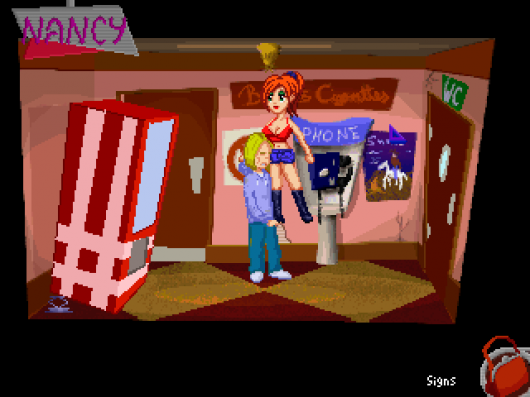 Since its original debut as part of the indie game Summerbatch sale, Nancy the Happy Whore has been fully voiced as part of its standalone commercial makeover, but herein lay a lot of problems. The quality of the acting varies a great deal, and at best it’s passable overall. Again, Nancy is the standout, with a voice that’s sassy and appealing. The nerd is decent too, portraying his cringe-worthy, try-hard approach very well. At the other end of the spectrum, the shop worker’s voice is phoned in and it cheapens the experience when the same tones pop up for one of the cultists.

The other downfall is that the audio is poorly balanced, with each character’s voiceover spoken at different volume levels, making it obvious that the various voice work was recorded separately on different equipment. For example, one character’s dialogue is echoed and quiet, while another’s is clear and loud. On the default settings the music is too overpowering, to the extent that you can’t hear a lot of what’s being said (although there are subtitles). You can adjust the volume of the music, but it becomes barely audible if you want to hear everything that is said reasonably clearly.

Visually, The Perfidious Petrol Station makes use of retro pixel art. Outside in front of the station is one of the more interesting settings to look at. It’s grotty, worn and falling apart; a lamppost emits a bright yellow glow in which a few bugs are flying around, set against a dark blue mountainous background. Perhaps a bit more work on shadows could have been afforded, but otherwise it works well as an opening location. One of the least interesting places is the cult’s hideout. Skulls are the predominant decoration but there’s not a lot of detail in the small room. Although some things in the environments are slightly out of perspective, it’s not hugely noticeable and does give off an air of suitable quirkiness. 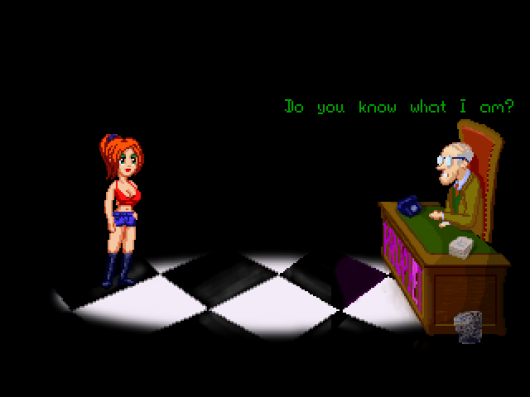 One of the drawbacks of the visual presentation is that the characters don’t emote particularly well. They’ll just stand there, hands by their sides with only their mouths moving. Although emotion comes across through the dialogue, putting in a variety of facial expressions would have gone a long way. For example, when one of the characters fires a gun through a window, no one seems to react. There are four other people in the room at the time and they all just continue standing there, fixed in one pose.

Another technical issue I encountered was an inability to get the game to run in full screen. The game would just crash whenever I tried it, so I had to play the whole thing in the tiny 320x240 pixel window. It’s disappointing that the game was created at such a minimal resolution and that the full screen option wasn’t playing ball, though the same problem doesn't seem to happen to everyone. A few other technical issues also popped up along the way, like a couple lines of dialogue lacking voiceovers, which should have been caught in testing. 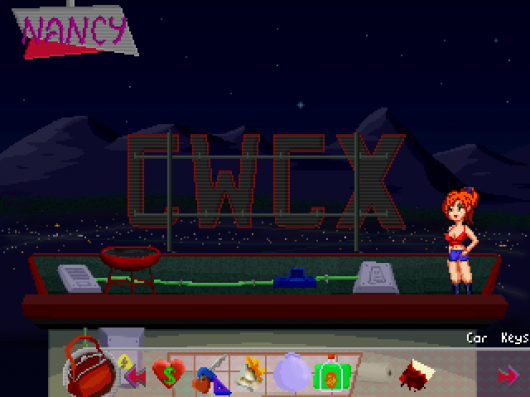 Otherwise, the game runs fine and controls smoothly. Like most AGS games, the interface is standard point-and-click, with the left mouse button performing every interaction, be it walking, talking or picking things up. Your inventory can be accessed from the bottom of the screen (represented as Nancy’s purse) and there are a few occasions when you’ll need to combine items. Nearly all the puzzles are inventory-based, but there is one section where you need to select the correct dialogue options in order to win someone over. However, it’s so obvious what the right choices are that even calling it a puzzle is a bit of a stretch.

Overall, the game runs about two hours and it does feel pretty short. It’s priced accordingly as a budget title, but another hour or so of gameplay wouldn’t have gone amiss, especially as some ideas introduced, like the cult, seem to come and go pretty quickly. Expanding that section and fleshing out the secondary characters more would have been welcome. As it is though, The Perfidious Petrol Station is a pretty fun game while it lasts. It’s disappointing that the audio is all over the place, but Nancy is a fun character to control and her cheeky charm resonates in the puzzles and dialogue. She may not have quite the polish of a high-end call girl, but for a pretty good time that comes cheap, call Nancy the Happy Whore.

The budget-priced Nancy the Happy Whore is a fun two hours thanks to the sassy titular lady and funny writing, but some technical issues and under-developed supporting characters cheapen the experience somewhat.

GAME INFO The Perfidious Petrol Station is an adventure game by Technocrat Games released in 2012 for PC. It has a Stylized art style, presented in 2D or 2.5D and is played in a perspective.