We get a small commission from any books sold.
All Bitmap Books
Written by
Stuart Young — September 30, 2008

Fans of puzzle solving and horror were well catered to with last year’s Penumbra: Black Plague, a clever free-roaming, first-person title that emphasized its physics engine to create elegant challenges, mixed with a few inventory puzzles and a pinch of stealth. What made that game so successful, however, was the sparing use of powerful foes, plus effective ambient noises and gritty, decayed environments to create a game that was extraordinarily frightening yet cerebral as well. Not a survival horror game (despite the enemies and the frequent need to flee) and definitely not a first-person shooter (despite the interface and camera, the player was weaponless), Black Plague occupied its own special niche whilst exhibiting the spirit of graphic adventures of old.

Unfortunately, Penumbra: Requiem is not that game. Nor is it a true successor. Rather than build on what made their earlier game so compelling, Frictional Games have chosen to recycle many of their art assets in an “expansion pack” epilogue that plays like an inferior version of Valve’s Portal. Building on the ideas of others is nothing new in the games industry, but when a series like Penumbra chooses to discard its own legacy in order to commit such a blatant rip-off of another title, it deserves a special mention. What’s worse is that the developers missed what gamers most appreciated about Portal and copied numerous incidental elements instead.

Instead of the suspenseful horror, smorgasbord of different puzzle styles and decent storytelling that we’ve come to expect from this series, the add-on consists of nine “levels” of physics-based puzzles. For reasons revealed late in the story, the scenarios are more abstract – glowing orbs, Myst-like tubes and switches, and slightly surreal industrial environments – which makes them inherently less satisfying than Black Plague’s mostly grim, almost mundane locations. The stages feel very much like the “test chambers” we saw in Portal, but the similarities don’t end there. 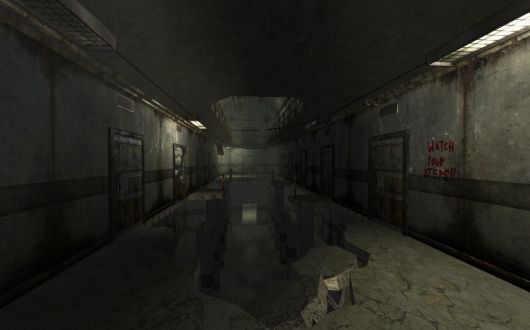 To leave each level, you need to pass through a portal, which can only be activated by collecting a set amount of “keys”. Making matters more complicated, there are anti-gravity pads and laser beams which destroy objects (but not your character) scattered all over the place. Overcoming these obstacles makes for diverting enough puzzle solving fun, but the abstract setting, the derivative elements and the lack of a structured storyline make it markedly lazier in construction than its predecessor.

For those unfamiliar with Penumbra's premise, Black Plague, like the series progenitor Overture before it, told the story of Philip, a young man investigating the disappearance of his father in a remote Arctic research base, in which many a terrifying surprise lurked. As the original story was essentially concluded in the previous instalment, the developers have tried to sidestep this problem in a logical, if not particularly compelling, manner. This time around, the story hinges on a new character, an insane scientist who has captured Philip since the last game. Now a prisoner, Philip is supposedly being forced to complete challenges in the rat-run we find ourselves in. Unfortunately, Penumbra already presented a better-written crazed antagonist in the last episode, and the idea has got a little stale since then.

Where the last game’s story was told with a mix of voiceovers, documents, scripted visual events and radio communications, the simplistic story of Requiem is relegated to a few audio logs. Also played up (à la Portal, again) is the schoolmarmly female computer voice that was a nice addition to the previous game but is overused here. As well as some more recordings from Philip’s father, these elements form the bulk of Requiem’s wafer thin narrative. There is no real sense of progression; the game sets its plot up at the start, and then reveals an underwhelming, “was-that-the-real-ending?” twist right at the end. 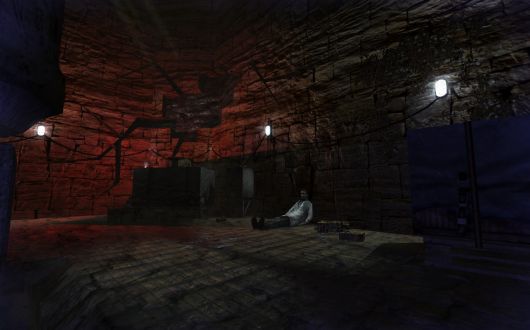 Having said that, it’s not an unenjoyable experience by any means. The puzzles are logical and often fun, and though fairly easy they’re strangely satisfying. There is, for example, a particularly good Lego-inspired challenge right at the start, and a bizarrely sinister moment involving some “extra hot” tomato sauce. Unfortunately, the key-collecting goal in every single level becomes boring pretty fast, and there are none of the well-designed inventory puzzles present in the last game, as there’s more tinkering with abstract machinery instead. The physics engine is still used a great deal, although it isn’t as crucial as in prior games. In a rather surprising change, there are no enemies in this game, so physical danger is now communicated with one too many frustrating jumping challenges.

The fully 3D environments, whilst simple architecturally and weakened by the extra abstraction in this episode, are still good at creating a foreboding atmosphere. They consist occasionally of sewers, ancient ruins, and arctic wilderness, but mostly abandoned laboratories and industrial facilities; similar in design to Black Plague’s but a little more surreal. Without enemies, the game has lost some of its fangs, but you can still have a nasty accident or two, and the haunting atmospheric sound is as strong as ever, meaning there are still a few chills to be had along the way. 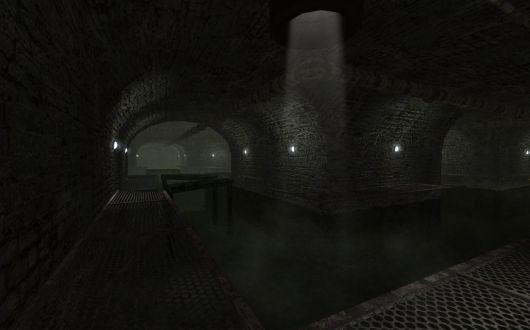 One can see the benefit of trying to ape the commercial success of another game, but this is a result which will fully please neither Portal nor Penumbra fans. Instead of the best of both worlds, it’s a bastard curiosity that will keep players fairly amused for about four hours, but nothing worth championing in the same way as its predecessors. Strangely, despite this download-only episode obviously seeking to appeal to a broader audience, as an expansion pack it requires Black Plague to run anyway.

This isn’t a long review because there simply isn’t much to say about Penumbra: Requiem – some abstract machinery puzzles in a slightly scary environment with an underwhelming bit of story, and that’s about it for a title that’s too little like its own predecessor and too derivative of another, better game for its own good. If you’re new to Penumbra, look to Black Plague before even considering this expansion, since you’ll need both in any case. For existing series fans, the story of Penumbra was already adequately concluded, and the events of this epilogue don’t really change or add anything to it, standing alone as an almost entirely separate experience. As a game it’s not unpleasant but as an add-on it’s anything but essential.

Makes an entertaining addendum to Penumbra; just don’t expect it to be as good as, or even similar to, the previous games.

GAME INFO Penumbra: Requiem is an adventure game by Frictional Games released in 2008 for Mac, PC and Linux. It has a Illustrated realism style, presented in Realtime 3D and is played in a First-Person perspective.

What our readers think of Penumbra: Requiem