Escape From Monkey Island is the fourth game in the wildly popular Monkey Island series, which goes all the way back to 1990’s classic The Secret of Monkey Island. I have been a huge fan of the series ever since I first played the original over ten years ago. Still, my feelings were mixed when LucasArts first announced Escape From Monkey Island. A common problem with any game series is that it can easily become formulaic, and water down with each new sequel. Sure, the first two games are legendary, but could LucasArts live up to our expectations again?

Even though Escape From Monkey Island is essentially “more of the same”, I am happy to say that designers Mike Stemmle and Sean Clark did manage to mix things up a bit. For the uninitiated, the Monkey Island series follows the swashbuckling adventures of pirate wannabe Guybrush Threepwood—or I should say captain Threepwood—as he battles the evil Ghost / Zombie / Demon pirate LeChuck—wait, make that an evil Australian land developer named Ozzie Mandrill—in his quest to win the hand of the beautiful governor Elaine Marley. Wait, this is just in: Guybrush and Elaine are now semi-happily married.

Of course, not everyone is happy with change. Many fans dismiss the game based on irrelevant little details. Apparently, the fact that the clock on Mêlée Island now reads 3 ‘o clock instead of 10 ‘o clock is considered blasphemy to some. And dividing EMI into acts instead of parts is obviously not true to the original Monkey Island games. One has to wonder why continuity-crazed fans take these issues so heavily where the games themselves are full of self-referential jokes and anachronisms. 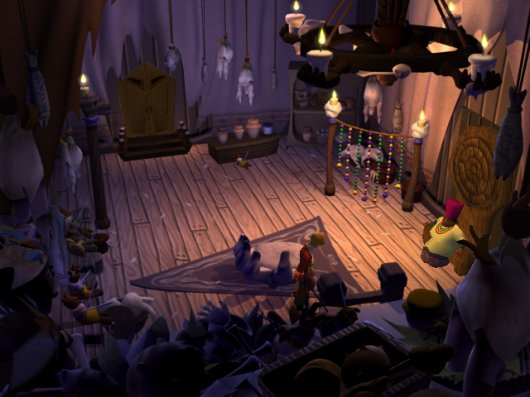 Judging EMI on its own merits, the game is certainly not disappointing. While it does have a few weak spots, it is a well thought-out game, and longer than the previous one. Where The Curse of Monkey Island boiled down to undoing a curse and a long and completely unnecessary explanation of earlier events, EMI has a sophisticated story with many interesting plot twists. Even though the real secret of Monkey Island may never be revealed, some other funny secrets are. Unlike its predecessor, EMI manages to add nicely to the established back-story, without dishing up a seemingly endless flow of mind-numbing minutiae, like we had to endure at the end of CMI.

Where the story shines, the dialogues fall a little bit short. EMI made me laugh out loud many times, but the jokes are sadly not up to the series’ standards. The conversations are often tedious and drawn-out, and too many situations feel like déjà vu. For instance, I was not particularly eager to go find a ship and crew, after having done so in each previous game already.

It seems EMI often gets trapped in the series’ own clichés. If the designers would have tried less to appeal to fans by adding familiar situations or references, it would have allowed EMI to stand more on its own. It is not very entertaining to hear the same jokes over and over again. I do like some of the fresh material though, such as the interaction between Elaine and Guybrush as husband and wife, and the frequent satire of corporate America. StarBuccaneers and Planet Threepwood are among the many places you’ll visit. 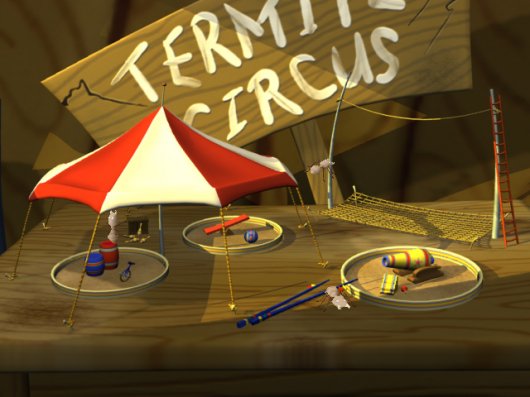 I suppose the visuals are a matter of taste. While the 3D renderings are bright and colorful, I felt a couple of areas in the game were too plastic, lacking in ‘piratey’ atmosphere. Most of the islands in EMI look more like the Smurf’s village than home to grog-swilling scalawags. Perhaps some of it was intentional, since over time the islands change into tourist attractions. Still, the graphic style leaves much to be wanted in terms of style, composition and atmosphere.

However, one hugely redeeming quality is the brilliant animation. Every line of speech is enhanced with excellent moves and facial gestures. In fact, some of the better jokes in EMI owe directly to their visual emphasis. EMI's animation may be the best I have ever seen in an adventure game. Of course, first-rate voice acting and music have become synonymous with LucasArts and EMI is no exception. The voice acting and background music are simply perfect.

All in all, Escape From Monkey Island is a quality adventure game even though the restyling of the old locations on Mêlée Island and Monkey Island is a bit of a mixed bag. The ending is long, satisfying and almost as disturbingly weird as the ending of LeChuck's Revenge (but without being such an anti-climax). While the art direction is a definite weak spot, it is compensated by a solid story and cleverly designed puzzles. 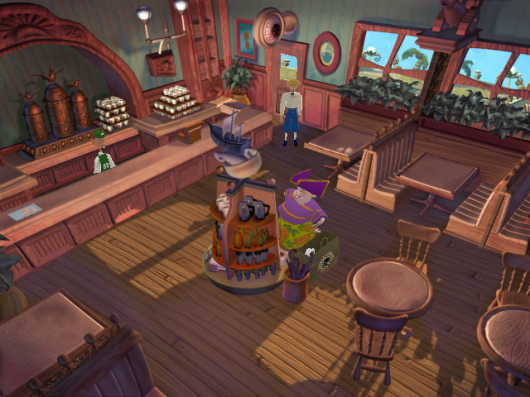 A fifth, and possibly final Monkey Island is inevitable. If EMI is any indication however, the series will be running dangerously low on fresh material. Hopefully LucasArts will allow Monkey Island to have a little creative rest. If Monkey Island 5 won’t be more original, I predict the critics will be unforgiving. The score in this review assumes that you have not yet played another Monkey Island game. If you have, you can take half a star off for the recycling of old jokes.

While certainly not the best adventure game LucasArts has ever created, Escape From Monkey Island remains a very recommended title. The game offers more than enough entertainment value to make this a must-have for any adventure gamer.

Escape From Monkey Island is available at:

GAME INFO Escape From Monkey Island is an adventure game by LucasArts released in 2000 for Mac, PC and PlayStation 2. It has a Comic cartoon style and is played in a Third-Person perspective.

What our readers think of Escape From Monkey Island

Not as good as its predecessors, but highly underrated!

This is one of the most underrated games out there. Criticism goes from the awful graphics to a deep hatred of Monkey Kombat, to a claim that it's just completely unfunny. I don't agree with... Read the review »