The year is 2012 and due to catastrophic upheavals on the earth's surface billions have died. Natural disasters have claimed the planet making it inhabitable. The last remnants of humanity live in orbiting space stations, this however, is not a permanent solution and a desperate plan is hatched. A three man crew will be sent to Mars and examine the possibility of terra-forming a new home for earth's displaced citizens. While attempting to land near the Cydonia Mensae (the face on Mars) your craft passes through an ancient undetected force field, damaging your ship and injuring your crew mates. Being uninjured you must act quickly to save the ship from an explosion caused by a damaged fuel tank. And that is just the beginning!

Once you have managed to save the ship and seen to your crew mates the real adventure begins. Your ship contains an escape pod, but you will need to disable the force field before you can use it to get home. Using a hover craft brought along for the mission you begin exploring the planet. Cydonia is a first person perspective game that allows for 360 degree panning. It also offers an number of third-person cut scenes showing your character going up stairs, entering the hover craft and hitching a ride with an amphibious creature near the end. I really enjoyed these scenes but as I got further into the game I found that I skipped them to progress faster through game play. Cydonia is also a inventory based puzzle-adventure. You will need to collect different artifacts through out the game to solve various puzzles. There were a few times when these articles were hidden in the environment, but for the most part they were easy procured with a little searching and clicking. One of the greatest challenges of the game is learning to use the aUI universal translator located in your helmet. The aUI translator helps you to translate the hieroglyphic symbols you will find. It took some trial and error before I got the hang of it, but it is integral for solving a number of puzzles at different points throughout the game, so play with until you have it figured out.

Cydonia is comprised of a number of interior environments situated through out the Cydonia Mensae. Though the graphics provide a realistic look at the surface of the Red Planet they are prone to a certain grainess. The indoor environments are much more lucid. They are alive with colour, which is in stark contract to the barren landscape outside. Though the graphics are not in the same class as those in Riven, they amply provide an interesting and intriguing place to explore. Unfortunately, for those who enjoy a lot of character interaction in their games, Cydonia has only two characters to interact with. The first a disembodied alien head, provides you just enough information to help you progress to the next level. The second is an alien hybrid which looks remarkably like a character straight out of James Cameron's movie The Abyss. This creature provides you with the key to disabling the force field and a even far greater prize. 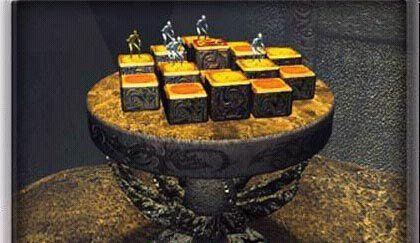 Getting around the environments in Cydonia is matter of point and click with the cursor changing shape to convey to the player if they can pick up or manipulate and object. The wavy arrow that tells the player which way they can progress takes a little while to get used to. At the beginning I found that I often over shot where I wanted to go or headed in the wrong direction completely. Also at first I also seemed to get turned around in the environment outside, since it seemed to look the same in each direction, and heading back to where I just came form or in the complete wrong direction from where I wanted to go.

On the box Cydonia boosts 70 to 80 hours of game play and this is provide via a number of puzzles that require the player to minutely change parts of the puzzles until you find the right combination. This does not require any other skill than patience and is really frustrating. Puzzles are why gamers like myself play puzzle adventure games and to deliberately stretch out the time it takes to solve a puzzle seems like a rip-off of what the box promises you. This wasted type would have been better spent by playing another smaller and simpler puzzle than by dragging out a solved problem. Other puzzles offered little context to why they were being played, and few clue to solve them. There was a good mix of puzzles in the game ranging from simple to a few very difficult ones. But as said earlier, although the puzzles in the game are not difficult many are tedious and redundant. Nor are they really linked to the story, unlike in other games like Morpheus these puzzles aren't there necessarily advance the story.

Cydonia is not exorbitantly priced game, in fact I would say it is priced quite reasonably for what you get. It has some really nice graphics and it is fun to translate all the symbols you find. However, the games weak point is its puzzles, which makes it tough to recommend it to puzzle hungry adventure gamers. This is not the sort of game that will keep you up at night deliberating over different puzzles, but it is a solid piece of entertainment. This game is more suited to first time or newer gamers who will not be disappointed by the number of long winded puzzles. However, if you need a gaming fix Cydonia will do.

This is an interesting adventure game which may appeal to fantasy fans, as well as general adventure fans.

GAME INFO Cydonia - Mars: The First Manned Mission is an adventure game by Aneiva released in 19992001 for PC. It has a Illustrated realism style and is played in a First-Person perspective.

What our readers think of Cydonia