Nick Bounty and the Dame with the Blue Chewed Shoe review

Nick Bounty and the Dame with the Blue Chewed Shoe  (2020)

David Slade Mysteries: Memories of the Past

If you asked Nick Bounty to describe himself, he’d probably reference the likes of Sam Spade and Philip Marlowe as his idols. Never mind that they’re completely fictional – their hardboiled swagger and self-assured confidence around the cold steel of a gun and the warm embrace of a pretty dame are what he can identify with most. Or at least, that’s what he’d like you to believe. In reality, the titular star of Nick Bounty and the Dame with the Blue Chewed Shoe is a down-on-his-luck gumshoe struggling to break away from solving lost pet cases; he's a loveable loser and a relic from an age past. In this third outing for the hapless PI, but the series’ first commercial release, Pinhead Games has crafted a solid if somewhat simple mystery for players to enjoy, with some commendable production values and humor that actually succeeds a large portion of the time – not an easy feat.

Thanks to his two previous outings, (still available to download for free), Nick Bounty is no stranger to staring danger right in its bloodshot eyes, even if it usually comes looking for him in the most unusual of ways. This time around, in order to break away from his typical low-profile cases and prove himself a great detective, Nick manages to get his hands on a police radio, which he then uses to insert himself into a potential homicide investigation: a body has been found, naked and half-buried in the sandbox of a local playground. Believing that his private investigator’s badge and newfound radio are all the authority he needs, he begins to follow a trail of clues to determine what’s really behind the death of the dame with the blue chewed shoe.

Though the nature of the case appears to be a bit more serious than ever before, that doesn’t mean Nick himself has gotten any less irreverent or lighthearted. His observations and inner monologues typically feature dry and witty one-liners, and the humor hits home more often than not. He even makes a number of references to the series’ previous outings, name-drops some well-known games and even breaks the fourth wall here and there. It’s not just Nick himself who’s up to bat this time either. Every crimefighter worth his salt has a sidekick, and three potential candidates reply to his ad for the prestigious position of assisting him in the investigation. 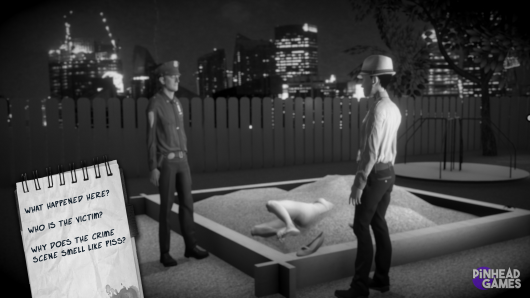 It’s up to you who is awarded the post: the hard-nosed ex-cop, the psychic crime fighter, or the curmudgeonly elderly gent. After interviewing each one, asking such hard-hitting questions as “What’s your least favorite color?” and “Trek or Wars?”, you’ll get to choose whom to take along, which, according to the developer, will provide a degree of replay value as it actually changes a few jokes, conversations, and even puzzles over the course of the investigation, without affecting the larger narrative. I went with Zachary Forsythe, the psychic who seemed less interested in putting evildoers behind bars and more interested in getting ladies into bed. In the short time he was around (he doesn’t enter the narrative right away, then only sticks around briefly before being absent again for a bit), the banter between him and Nick was amusing and natural. Even his psychic “powers” got to shine a couple of times, a trait neither of the other sidekicks share. There wasn’t much time for me to bond with Zachary, but I would welcome seeing him again in a future installment that gives his character more development.

Regardless of your choice, gameplay is pretty straightforward, with a standard inventory for collected items. A smart cursor lets you quickly perform whatever is needed with environmental objects, and I appreciated that hotspots became non-interactive once they had served their purpose. This allows for quick sweeps to clean out each scene, at which point the game automatically ushers the narrative along. Some interactions turn up further evidence that must be collected and fed into Nick’s crime computer back in his office. For instance, opening a certain drawer reveals what appears to be blood spatter, which then triggers a second prompt to collect a sample of it for analysis.

It’s all very streamlined, without anything further for you to do other than click to confirm. A handful of inventory-based puzzles must be solved (how do I get past the attacking seagull and onto the boat?) and the endgame requires a numeric code to be sussed out through careful examination of the environment, but these types of obstacles are rare. There are no moments of “moon logic,” as the game is designed to be accessible even to genre newcomers and provide a steady flow of progress, though this simplicity may disappoint those looking for a deep challenge. But for a lighthearted “comic noir” story like this, which clocks in at only around two to three hours, it works well. 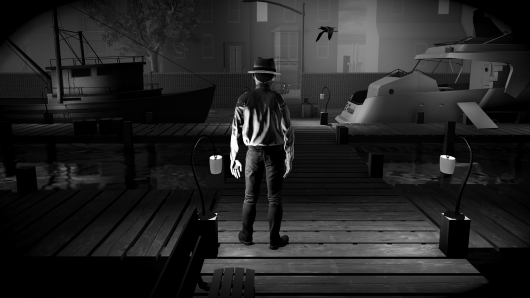 Given the minimal player agency involved, the actual murder mystery largely solves itself. Feeding collected evidence samples into Nick’s crime computer automatically provides him with important data, which in turn lets him make case-specific conclusions without your help. (You are given a chance to name the murderer near the end, but the story plays out even if you flub this opportunity.) There are a couple of nice breaks from this, such as when you analyze security cam footage to check on a suspect’s alibi. This is presented in the form of a number of still images that you cycle through on the computer before selecting the one that is most pertinent to your case. The generally mundane real-world nature of the investigation is also spiced up with a few notable events, such as stumbling upon a creepy doll room, encountering a bare-knuckle brawl in a dark alley (which plays out like an action puzzle, finding a way to use your surroundings to fell a foe twice your size), and a high-speed car chase with Nick surfing on the back of a semi-truck.

The financial support of a successful Kickstarter campaign is immediately evident in the game’s presentation. Gone is the crude action-figure-style animation of The Goat in the Grey Fedora, replaced here with a cast of realistic 3D character models. The backgrounds are detailed and moody, with impressive lighting effects enhancing the series’ familiar black-and-white aesthetic, which, along with the instrumental jazz-infused soundtrack, lends the whole affair an authentic air of the golden age of gumshoeing. While not quite bridging the uncanny valley, human characters look reasonably lifelike and are animated expressively enough. Voice-overs have likewise benefited from the extra funding, with solid performances across the board. Actors include a few names that will be familiar to fans of Telltale (where designer Mark Darin worked for many years), like Dave Fennoy, Adam Harrington, and Melissa Hutchison. There’s even a humorous edit from the recording booth purposely left in, a gag featuring a cast member who’s had enough storming off the set. 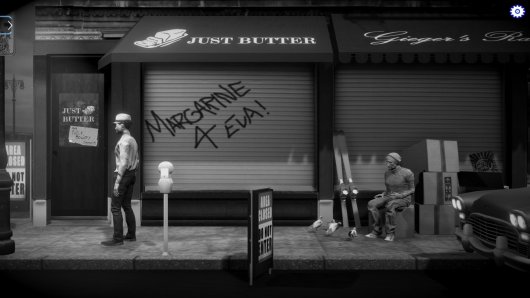 An unfortunate drawback of the 3D environments is that sometimes a vital clue located in the extreme foreground will disappear off-screen when the camera accompanies Nick to the back of a scene to conduct his search. The protagonist also has a propensity for getting himself stuck on even the smallest object when pointing-and-clicking your way through the scene, and some hotspots are finnicky about your positioning before activating, requiring the use of the WASD keys to fine-tune the built-in pathfinding. (You can opt to use the keyboard for all navigation if you prefer.) At its worst, an early instance I encountered saw me exit and reenter a scene a number of times in order to get Nick to pick up a police baton on a wooden table – every time I tried, he would just continue walking in place, with his hip pressing into the table, unable to pick up the object within reach.

Even with a few rough edges, The Dame with the Blue Chewed Shoe is an effective move for Pinhead Games into the retail market, giving us the same humorous investigating as before but in a more accomplished offering. A short runtime and slight gripe or two about controls are quickly drowned out by nicely done 3D graphics and a solid aural experience, though enthusiasts of challenging puzzles won’t find much here to cut their teeth on. Instead, the adventure succeeds mainly by virtue of its witty and humorous dialogue, and even throws in a bit of replayability, with three potential sidekicks to choose from. It’s the game equivalent of a dime store pulp novel, and I think that’s something that Spade, Marlowe, and particularly Nick Bounty would definitely approve of.

After two freeware warm-ups, Nick Bounty returns for his first commercial outing, this time picking up a sidekick to help him solve a baffling murder. Don’t expect much in the way of challenge, but the comedy and production values make for an entertaining couple of hours.