To Hell with the Ugly

Some adventures go the comedic route, some go serious, and then there are some that aim simply for the bizarre. La Poule Noire’s Edgar: Bokbok in Boulzac is one of the latter. With its variety of just-plain-weird situations and an eccentric cast of characters all seemingly reading from different scripts  – headed by Edgar, a squash farmer with a metal colander for a hat and a chicken for a sidekick – this is definitely not your typical adventure and may be something of an acquired taste. But for those willing to try something a little different, a low level of difficulty keeps the quirkiness coming and makes for a short but fairly fun outing with a delightful cartoon aesthetic.

Edgar lives alone out in the woods with his only real companion being his chicken, Precious. Every day, the pair tend to their crop of squashes. Edgar has developed an auto-watering machine for his patch that is powered by a rabbit running on a treadmill, but disaster strikes when the device’s Razidium – a rare mineral with bug repellent powers – burns out and a swarm of lionflies descends upon the defenseless fruits. The only solution to the infestation is for Edgar and Precious to row across the lake to the nearby town of Boulzac in search of a new supply of Razidium. Unfortunately, Edgar’s search is stymied by the fact that no one in town has ever heard of Razidium or is even interested in it.

The game does an excellent job of making it feel like each of the townsfolk is living their own story. While none of the characters are all that deeply drawn, they all have their own main concerns, which usually takes precedence whenever Edgar talks to them. The town doctor is interested in the healing power of music, so he blows loud horns in people’s ears to help them, while a bartender who was once into creating all manner of exotic drinks has his passion rekindled when Edgar brings him the smelliest assortment of ingredients ever. Then there’s the new guard for an underground cave entrance who works during the day as a gardener and loves awkward poetry, and the psychic who reads people’s fortunes in vegetables. The list is quite extensive. 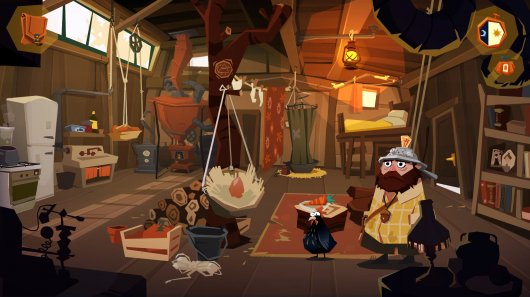 Though the game deserves praise for giving each person their own unique backstory, conversing with these people through text (there are no voices in the game) sometimes leads to losing the plot as Edgar will ask them about his own problems and they’ll go off on theirs. Careful attention must be paid to determine when someone is actually asking for Edgar’s help and when they’re just relaying their own interests.

While Edgar’s initial quest for bug repellent seems rather pedestrian, if a bit unusual, events begin to take on a more sinister tone. With the mayor’s office subsidizing the ownership of green pendants for the town’s populace, a fire burning beneath the roadways for years, and a high security winery on the outskirts of Boulzac, there are more than a few suspicious things going on. Edgar’s search ultimately has him stumble into a secret plot that feels perfectly at home amidst all the zany different interests of the villagers.

Locations aren’t nearly as varied as the people, and none of the specific settings particularly stand out. The game generally plays out across four distinct areas: Edgar’s farm, Boulzac itself, the wine factory on the edge of town, and a series of underground tunnels. Judging by the little old grandmother playing console games and the teenagers texting on their phones, the game is more or less modern, although there’s nothing to really pin down a particular point in time. 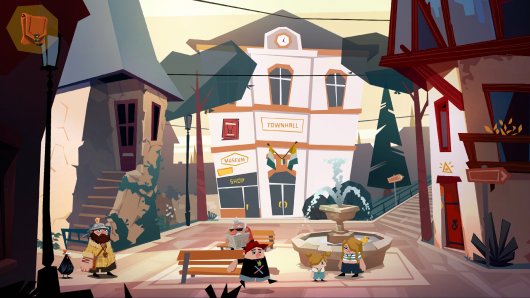 Edgar’s angular cartoon graphic style is a clean one, with everything generally composed of relatively simple shapes and colours. Characters are injected with life even when just idling by subtly stretching up and down in an exaggerated breathing sort of way. What is most visually impressive is the presence of weather effects, with the game moving at random intervals between sunshine and rain. Over the course of the story, time passes from day to night (and back), which also adds some nice variety even when the same places are revisited.

Instrumental music is used sparingly but to good effect, accentuating key moments. It gets rather lively when encountering a knightly character who quizzes Edgar at one point in an imaginary game show fashion. While wandering through Boulzac and its surrounding environs, there are usually some ambient effects heard, even if it’s just Precious’s clucking.

The story proceeds in a linear fashion, with a single goal presented at a time. Due to the tendency of characters to speak about their own issues rather than Edgar’s, it can be tricky on occasion to discern what exactly the current objective is. However, the size of the play area is relatively small and the number of interactive areas fairly few. Even when I was uncertain of what the game wanted me to do next, it was an easy circuit through the town and other areas to simply try all the hotspots available until things progressed again. 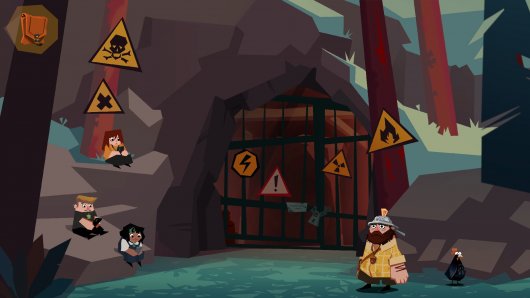 Edgar is directly controlled via keyboard and mouse or a game controller. Ordinarily I’m a keyboard and mouse player, but I found the controller felt better for this game, even though both control sets work well. However, there’s one puzzle in the game where up and down inputs need to be alternated between repeatedly, and for that I found the keyboard was definitely the preferred method.

Regardless of which control scheme is used, Edgar must be manually navigated around the various locales. When he gets close to something that can be examined, interacted with, or talked to, an icon appears and a simple button press initiates the appropriate context option. Edgar can also collect a number of items from his surroundings, and another button makes your acquired objects appear along the side of the screen. Despite this feature, though, there are no real inventory puzzles to solve as when an item is needed, it is automatically chosen as the context option for the hotspot it’s to be used on. 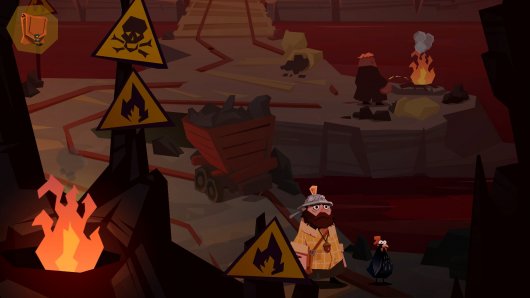 Indeed, this is definitely a light game that presents very little difficulty. All told, I completed it in 3½ hours, but that included about 20 minutes of replay time due to Precious visibly disappearing at a certain point shortly before the one puzzle sequence that she’s needed to solve. The game provides no manual saves and the autosave, which kicks in upon every room change, had saved Precious in her vanished state and so was useless to me. Fortunately the bug did not resurface, although I did encounter a similar problem with Edgar himself disappearing at one point. At least this was remedied by reloading the autosave, which caused the protagonist to display again.

Edgar: Bokbok in Boulzac is a straightforward affair that won’t pose much challenge to players. But it isn’t meant to, as its focus is on the bizarre interests of the townsfolk of Boulzac. Their non sequiturs do sometimes require a bit of reflection to “get” what exactly they’re going on about. However, a degree of whimsy runs through the whole game that makes for a nice break between heavier and more complex titles. Neither a comedy nor a serious drama, this is a lighthearted experience that primarily has its charming art style and innate weirdness going for it. Those looking for a substantial adventure won’t find it here, but anyone interested in something just a little different from the norm may well want to give this a try. Just beware the bugs, in more ways than one.

With an eclectic cast of characters, the simple but charmingly cartoon-styled Edgar: Bokbok in Boulzac keeps players guessing what they’ll encounter next in this bizarre quest to save a squash farm.

What our readers think of Edgar: Bokbok in Boulzac