If genre history has taught us anything, it’s that you can’t create an adventure game omelet without breaking a few social norm eggs. Even the Guybrush Threepwoods, Larry Laffers, and George Stobbarts of the world didn’t get where they are without a stolen item here, a narrowly avoided breaking and entering charge there. However, few ride the morally grey line quite like the first-person protagonist of Blyts’ Nobodies: an official crime scene cleaner, disposing of dead bodies and evidence left after government-sanctioned assassinations. It may not be the most versatile or ambitious game out there, but it nonetheless creates an intriguing atmosphere that’s fun to putter around in for a few hours of point-and-clicking, and even includes a dastardly deed or two.

The story is a shallow but entertaining take on the mid-eighties Cold War era, appealing to those of us with an interest in spy novels, secret organizations, and covert operatives. There is a well-hidden war being fought in the intelligence world, and as counterterrorist Asset #1080, it is your job to conceal any traces of it before John Q. Public learns the truth. The presumably “evil” organization Q-100’s top agents are being eliminated in covert assassinations all around the globe. Now, via impersonal memos, your employer sends you to dispose of a series of bodies and eliminate all evidence while remaining undetected and without arousing suspicion.

To this end, gameplay generally consists of two phases per assignment. Your first priority is to find an untraceable means of dealing with the body, as well as any other incriminating clues that a murder took place there. Depending on the location, this could mean any number of things, from a simple stashing of the cadaver under a new identity in a hospital morgue, to a more complex process of transporting the remains from one end of an occupied passenger train to the other unnoticed. A very simple point-and-click system allows for interaction with objects from a first-person perspective, occasionally picking up an item to carry with you for use along the way. 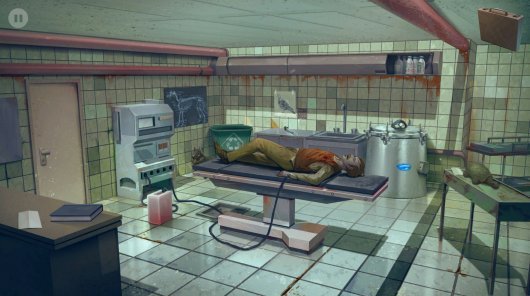 Nobodies allows for some fun trial-and-error, within limits, letting you try different ways of approaching your task. During a hotel room clean-up job, for instance, simply chucking the body out of the window does remove it from the scene but also means it’ll be easily spotted, blowing the whole crime wide open when secrecy is of paramount importance. Missteps like this (or, say, picking up the body and then walking out into a public area) will lead to a failed mission, causing the game to reload at the most recent checkpoint. It’s a very forgiving system and there is rarely any actual progress lost, however, encouraging experimentation.

Once the deceased has been dispensed with, the mission can be exited, though this will also lead to a fail state unless you’ve taken care of the second phase of gameplay: there must be no trace of either you or the crime left behind. This means incriminating evidence must be properly dealt with, as well as any incidental items you may have picked up that now need to be returned to their respective locations. Borrowing a cable splitter from a television set to help rewire a surveillance camera, for example, means the cable needs to be replaced before you take your leave, lest the authorities catch wind of your presence. You are a ghost, invisible, and must remain that way. This aspect of the experience is far less interesting, and quite often boils down to retracing your steps to return everything to the state in which you found it, though it does make sense from a narrative perspective.

As the missions tick by, averaging somewhere between 15-30 minutes each, the levels become longer and more complex. You may be required to travel to multiple locations to achieve your objective, leading to more unsuccessful attempts that are still fun to try out at least once. Sure, you could bury the body in a shallow hole in a suburban backyard, but the stench of decay will cause it to be discovered soon after, meaning you better get creative and think of a more permanent solution. It’s even possible to eliminate the unlucky civilians who stumble across your clean-up efforts, but this is similarly a cause for mission failure, as further casualties bring far too much scrutiny and must be avoided at all costs. 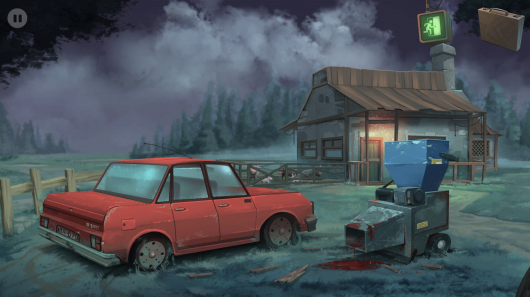 While the ultimate objective is always the same, there’s a good variety in the eleven missions themselves, whose settings range from a prison to a private airstrip. There are even a handful of other puzzles to contend with, like a forklift-and-car block puzzle in a junkyard, or mixing different substances together in a science lab. Fortunately, only once during the entire game did I encounter an issue of finnicky hotspots causing me to overlook an obvious way forward, due to the optional hotspot indicator occasionally combining two hotspots together.

On the graphical front, Nobodies has a fairly simple hand-drawn art style, almost a cross between colored pencil and watercolor art, with clean and detailed environments. Missions are laid out in slideshow-style format with static screens to maneuver the smart cursor around in. When events transpire, such as the police showing up or objects in the world being interacted with, they happen via static pop-in images that appear or change as single frames; there’s no actual animation to speak of. Music is similarly bare-bones, with only a single track, appropriately spy-themed, that plays over the main menu and mission select screens; the actual gameplay is underscored only by environmental sounds. A nice feature, however, is the inclusion of a voiced narrator that gives you your briefings prior to each mission, building up a bit of welcome narrative.

Nobodies certainly gives off the appearance of having been created on a tight budget, but that didn’t stop the developers (previously responsible for the much different Kelvin and the Infamous Machine) from finding cost-effective ways to implement their ideas. The angle of cleaning up violent crime scenes – and having to stay undiscovered while doing so – goes a long way to building a unique atmosphere, and though there’s usually only one right way through a mission, there’s enough built-in flexibility to allow playful – sometimes bloody – experimentation. It’s a modest little adventure, but with such a unique premise it turns out a game all about hiding your identity manages to stand out from the crowd.

Nobodies is available at:

As standard as both the point-and-click gameplay and production values are, Nobodies manages to carve out its own niche by giving players’ twisted imaginations a bit of free rein.

GAME INFO Nobodies is an adventure game by Blyts released in 2019 for Android, iPad, iPhone, Linux, Mac and PC. It has a Illustrated realism style, presented in 2D or 2.5D and is played in a First-Person perspective.

What our readers think of Nobodies