I enjoyed my time with the original SIMULACRA. It may not have been perfect, but it provided a sense of enjoyment by remotely digging through someone else’s personal life in an effort to uncover a mystery. The occasional creepiness factor brought on by its supernatural elements didn’t hurt either. Two years later, Kaigan Games is back with SIMULACRA 2, its latest effort in the “found phone” adventure subgenre, but while slightly upping the ante on its video production values, this time the voyeuristic thrills it delivers seem more tedious than titillating.

Despite being a fan of horror, I’ve mostly avoided the social media-inspired fright flicks of the past few years. Try as I might, I can’t bring myself to find scares or suspense in a story centered around an online friends list. Similarly, the first strike against SIMULACRA 2 is that it features at its core a group of four “influencers,” a social media profession so vapid I cannot possibly take any attempts at terror and personal drama seriously.

To be fair, things start out promising enough. Choosing to be either a tabloid reporter or a junior detective (though the choice doesn’t seem to impact much other than a unique opening movie and the odd conversation option), you are approached by a police officer named Detective Murilo, who identifies himself as part of DOOP, a special division known as the Department of Obscure Phenomena. He enlists your help in solving the death of one Maya Crane and hands you the deceased’s phone before disappearing, claiming that it must hold the information needed to crack the case. 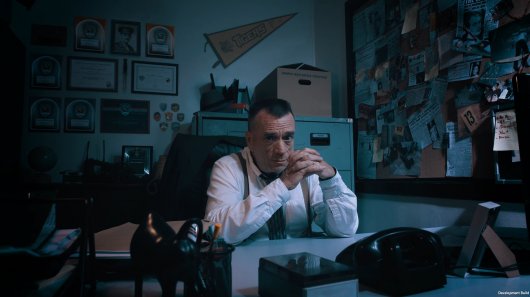 What follows is, at first, fairly standard found-phone-style gameplay. Featured prominently on the screen is the dead woman’s cell phone display, and at the outset most apps are either locked or corrupted, as are certain video files that Murilo feels sure must hold key information. In order to progress, you’ll need access to Maya’s personal details – her text messages, her group chats, her social media accounts. You see, as an influencer Maya is a social media celebrity who uses her standing with her base of online followers to promote products, services, and certain points of view. In Maya’s case, her virtual influence centers around healthy living, diet, and exercise.

You’ll spend the majority of the four or five hours it takes to reach the end reading up on and interacting with Maya’s closest circle of friends – Rex, Arya, and Mina – three other social media entrepreneurs like her, each with his or her own angle. While poring over their group chats and perusing each of their social media pages in turn, a rift in their partnership is soon revealed, which Detective Murilo – who keeps interjecting himself via text messages, recorded video messages, and short one-sided phone calls – is quick to pounce upon as a possible lead in the investigation. It seems that someone made a pact with an entity known as the Rippleman, who promises a bump to an influencer’s subscriber base while putting a lid on any internet trolls currently nagging them – all in return for a dreadful sacrifice.

As banal as that sounds for the premise of a techno-thriller, it only goes downhill from there. The game treats it as a given that some supernatural force did indeed actually kill Maya, and attempting to shed light on which of the trio committed the dastardly deed of securing its services unearths such unrelatable drama as one of them lying to her audience about being officially endorsed by a major fashion company, while another is being picked on by her fans for co-opting others’ tragedies to fuel her own songwriting. The only thing more jejune than dealing with this plot is having to pick your way through the different databases and piecing it together bit by bit. This isn’t an indictment of the gameplay itself, as the voyeuristic thrill found in the previous game was quite interesting. But with the sense of unease over violated privacy replaced here by the orchestrated façade of a social media news feed there’s next to no tension to speak of this time, which is a dire verdict for a game of this ilk. 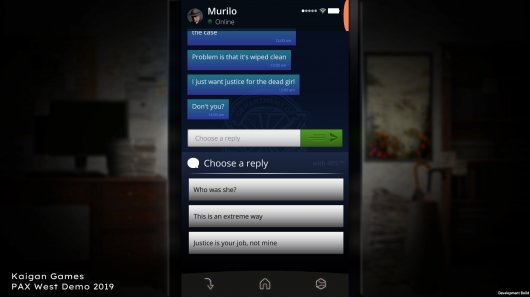 SIMULACRA 2 sticks close to its predecessor’s roots in terms of its presentation, with real actors portraying the principal cast through a good amount of live-action video stumbled across in your search. The characters are all played straight, though a hammier approach might have suited the melodramatic tone of the story better. Only the somewhat bumbling Detective Murilo makes any attempt at humor, but even this has a short shelf life when he can’t figure out how to stop his own video recordings (that he still sends you) or after he accidentally butt-dials you one too many times.

Music is used sparingly, so as not to drown out the digital bleeps and bloops of Maya’s phone, along with other occasional bits of web-based audio, though there are a small number of licensed tracks that unlock over the course of the game. About the only actual bit of creepiness is the slowly-changing background image of Maya adorning her phone’s screen, which morphs to become more and more unsettling and threatening the closer you progress toward the finale. Eventually even witnessing the actual moment of Maya’s death is no substitute for the sense of dread the rest of the game has failed to conjure up.

I kept hoping for an interesting turn in the narrative that would motivate me to delve deeper into the text chats and news feeds, or some kind of challenge to at least offer a welcome diversion, but most of the game’s attempts at puzzles are quite simple to navigate. Occasionally scrolling past a section of important text will generate an on-screen button which will store the current passage as a clue for later use – it doesn’t even require you to actually pay close attention. When the game wants you to advance, it presents a question or two about its characters or world that must be answered by selecting the appropriate clue, presuming it has already been found. 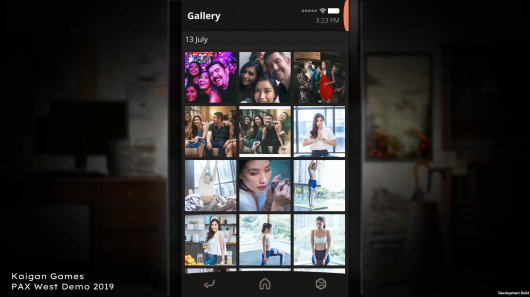 To its credit, the game does occasionally include more involved progression barriers, employing the phone for some actual sleuthing, short-lived as it is. Using gathered information to impersonate one of Maya’s cohorts puts the device to good use, while inputting details gleaned in your investigation into a searchable police database does require pointed detective work. Otherwise, player agency is largely restricted to clicking on icons, scrolling, answering the phone when it rings, and choosing reply options in the various text message conversations you’ll take part in. Even the ending is a little vague, but by then I had long lost interest anyway.

On the surface, SIMULACRA 2 seems like a capable follow-up to Kaigan Games’ previous paranormal found phone thriller. But while the gameplay and presentation are quite similar, the puzzles have been overly simplified this time around. Worse still, its unrelatable characters and anemic narrative are pure anathema to building any meaningful suspense to carry the game through to its conclusion, and really just served to make me feel melancholic for those who actually feel they have to go to these lengths to secure the support of their online fanbases in order to earn a living. Without enough compelling gameplay or more fitting content to generate actual horror, this sequel completely misses the mark of the supernatural thriller it’s aiming for.

SIMULACRA 2 is available at:

Although it doesn’t feel entirely phoned-in, SIMULACRA 2 fails to either build on its predecessor’s style or provide enough worthwhile substance of its own, making for a sequel that isn’t quite transmitting at full strength.

GAME INFO SIMULACRA 2 is an adventure game by Kaigan Games released in 2019 for Android, iPad, iPhone and PC. It has a Live Action style, presented in Slideshow and is played in a First-Person perspective.

What our readers think of SIMULACRA 2