Jason Godbey’s Discolored is a difficult game to review, or even describe. It’s more than a puzzle game and yet there is no story, no text, no characters to interact with. On its Steam page the synopsis reads: “Locals whisper of a roadside diner that’s lost its color. You are sent to investigate.” I didn’t see this before playing the game so I didn’t even have that much information going in. And in many ways it works best like that. Discolored is a narrative exercise in your own mind, where you fill in the blanks with your own story. Without much in the way of context, you will find yourself all alone in a high-quality 3D environment that needs its pigments restored – a task that proves far more interesting than it may sound.

The game opens as you step out of an elevator into what feels like a 1950s-era PI office. On the desk are a couple of photos of a diner, all in black and white, and an item called a “Card with Holes” that looks a little like a piece of old 35mm film, except larger. After inserting this card into something called a “Viewer” and using it to look at what appears to be a painting of a moon-filled landscape on the wall, you are suddenly transported to the same mysterious roadside diner from the photos. And I mean the exact same, as even here everything is black and white – not in the right and wrong sense, but in a visually monochromatic way.

The restaurant and its immediate surroundings represent the entire locale in which the rest of the game takes place. Outside is a viewing tower that you can climb and see the world around you from above. Behind the diner is a water well and a few piles of random junk. If you try to walk too far down the road, you are instantly whisked back to your starting point. There is no implication that you’re dead, but you’re clearly trapped in this place, giving me the distinct feeling of the beginning of a Twilight Zone episode: one of mystery but with a whiff of danger in the air. 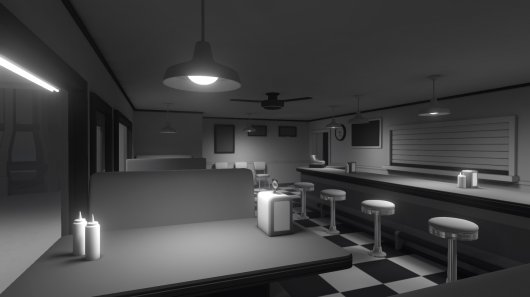 The diner itself is a neat and tidy setting, with stairs at the back leading up to a second floor that appears to be the residence of its owners. There are a few closeup views of particular areas or items, such as a briefcase and the cash register in the diner, and interacting with these is a smooth and natural process. The whole scene is very reminiscent of typical ‘50s small-town Americana.

One of the highlights of Discolored is the atmosphere it creates. While the 3D world is rather simply but beautifully rendered, what really sets the mood is the music. Light jazz music plays in the background and the themes change as the game progresses. After the completion of an important task, the score takes on an eerie quality that evoked in me a feeling that someone was watching me! The soundtrack fits in perfectly with the visuals and enhances the whole experience.

The main goal – although never stated – appears to be restoring color to the world, which is achieved through an excellent gameplay mechanic. There are three colored prisms – green, blue, and red – which you need to locate and return to their proper spots within the diner. Once one is returned to its correct place, the entire diner changes in hue as that particular color is restored. It’s not only a great way to reinvigorate the environment aesthetically, it’s also instrumental to progress as every time you recover a color, new items become visible that were previously indistinguishable from the monochrome background. Using these objects then helps both to open up new areas like an attic and basement, and to complete puzzles you might not have been able to solve up to that point. 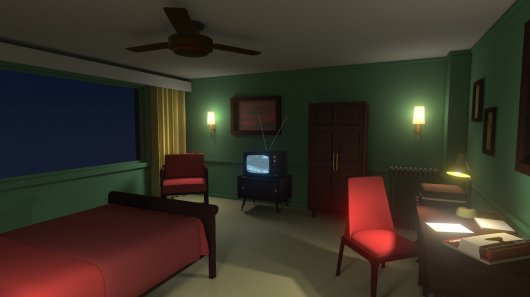 Along with a bit of exploration, Discolored is entirely puzzle-based with no particular in-game motivation driving you forward beyond seeing what is possible. Needed items can be found around the diner and you progress by picking them up and using them in the environment, occasionally after combining them with other objects first. There is also one puzzle involving a child’s crane set, which you manipulate through a unique menu that gives you access to the direction and grabber controls. None of the puzzles are especially difficult and all seem to be intuitive things to attempt in context, yet there is a repetitiveness to the basic formula after a while. While this is pretty much standard for adventure game inventory puzzles, without any characters to interact with or dialog to read, there is really nothing to offer some variety or a change of pace.

Controls are fairly simple in that you use the mouse to turn around in the 3D world, the WASD keys to navigate and the E key (or the right mouse button) to access the inventory. Saves are manual and can be accessed through the main menu by hitting the Escape key. I did come across a couple of bugs, one of which was very frustrating as it prevented me from backing out of a suitcase closeup and forced me to  restart the game to fix, but after I finished playing a patch was released and this appears to be solved. 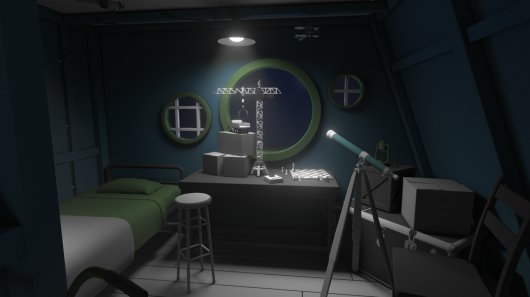 After you’ve restored all color by putting the three prisms back in their proper places, events take a left turn and you’re required to solve a mystery involving triangles and the viewing tower. If that sounds overly vague, it is. From the moment I finished with the three prisms, I had absolutely no idea what I was doing or why I was doing it. Viewing tower, phone box, triangles on the ground, and more of those cards to put in your viewer all factor in, but really I was just experimenting to see what might work because there was no other option.

I finished Discolored in one sitting, taking me about 90 minutes, and I was left with more questions than I started with. Do I understand what happened in the game? Not in the slightest. I genuinely have no idea why I was there, or why I needed to restore color. I don’t know why the color was gone in the first place, or why it was tied into the prisms. I don’t even know why I made a phone call at the phone box at one point or to whom I (presumably) spoke to. And yet for all my confusion, did I enjoy the game? Yes, very much. The atmosphere is excellent, and I love the concept of adding or restoring color to a world, which is implemented nicely here, if lacking enough context for what it all means. It’s hard to pinpoint why I liked this game so much, as it’s an experience whose sum is greater than its parts. But I did, and I can only suggest people try the game themselves. And if you do, could you let me know what just happened?

Discolored is available at:

Discolored is a surreal and atmospheric experience that is less a well-rounded adventure than puzzle game, yet it is very satisfying and enjoyable to play. Just be prepared for it to raise a lot of questions and leave you to supply your own answers about the strange events unfolding around you.

GAME INFO Discolored is an adventure game by Godbey Games released in 2019 for Apple TV, iPad, iPhone, PC, Switch, Xbox One, Xbox Series X and Xbox Series S. It has a Illustrated realism style, presented in Realtime 3D and is played in a First-Person perspective.