Adventure games by A Brave Plan

Much is in the news these days about climate change, clean water supplies, and renewable energy, so it was only a matter of time before such subject matter started filtering into games. A Brave Plan, an indie team made up of veteran AAA developers, has done exactly that with their free-roaming first-person adventure The Bradwell Conspiracy. Providing a two-player experience in a single player game, this trip through a near-future museum/research lab is engaging and somewhat thought-provoking, though marred a little by technical glitches and an overly pat ending.

It's the summer of 2026 and you are visiting a museum for the Bradwell Foundation situated near Stonehenge. Right from the off, things go wrong as the game starts with you waking after an explosion has ripped through the structure, leaving you and research scientist Amber Randall trapped in separate parts of the complex. The pair of you communicate via the Guide – wearable, talking tech glasses that allow for vocal communication and the transmission of pictures back and forth. And yet the game casts you in the role of a silent adventurer, smartly justifying it by having the Guide analyze your condition and informing you that you can't speak due to larynx damage from smoke inhalation.

In the early stages of the game, your goal is to work with Amber simply to find a way out of the building. As all the exits have been locked down following the evacuation, this proves more challenging than anticipated. The museum itself connects to the Bradwell research labs. Two of the company’s major products are the boastfully-named Bradwellium (also known as Substance) and the Substance Mobile Printer (or SMP). Bradwellium is described as programmable matter. Using the vaguely gun-like SMP, you can combine digital blueprints of certain items with quantities of Substance to print 3D copies of said objects. In an early tutorial this is used for trivial purposes, but as the adventure continues the SMP becomes the key to progressing, used to construct everything from simple planks for crossing gaps to complex mechanical and electrical equipment for repairing the various machines damaged in the explosion. 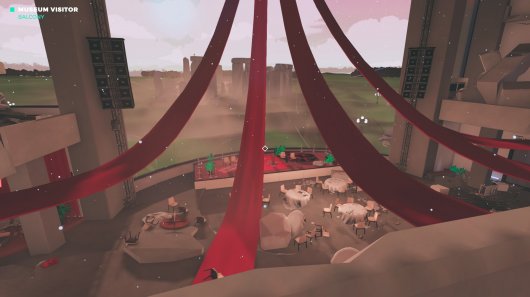 Your other primary tool is the photographic ability of the Guide. With the tap of a button you can take a picture of whatever you're looking at to send to Amber. She serves as your remote companion, assistant and narrator who will usually provide some manner of feedback on the images you send. This can range from hints for overcoming the environmental obstacles in your path to background context for the information you find on scattered whiteboards, note pages and plans throughout the complex. It's through these interactions with Amber that the story unfolds. As you delve further, it becomes apparent that the explosion wasn't an accident. In fact, the higher-ups at the research facility were clearly expecting something to happen as they made sure to circulate memos for everyone to re-familiarize themselves with security procedures. Slowly the Bradwell conspiracy is teased out as you discover who was responsible for the disaster and why.

Understandably, the whole mystery is tied up in the nature of Bradwellium. Not only can it print any object for which blueprints exist, it is integral to the company’s other major project: the production of water filtration services to serve the clean water needs of the entire planet. A byproduct of that filtration is the ability to generate safe, efficient, hydrogen-powered energy. Such a miracle Substance is certainly apropos of the concerns facing our own society today, although the discovery and employment of something similar within the next few years is perhaps a bit of a stretch. As with all technology, however, there are downsides that come into play in the rest of the story. I welcome the real-world narrative connection, but I found the conclusion and final decisions Amber and I had to make to be rather naïve and too black and white. I won't spoil it but given the premise of a material that provides energy and clean water, the final resolution seemed rather extreme to me and would not have been a choice I made had the game not forced me to.

The engaging investigation into the conspiracy takes place side by side with the exploration of the Bradwell building, which starts in the spacious museum with various displays touting the wonders of what the team’s scientists have unlocked. From there you’ll find access into the laboratories and research areas of the complex, filled with lab equipment, computers, and the detritus of office workers. The Bradwell Corporation is obviously well-to-do, as some of the common employee areas are pretty swank, with features such as gardens and waterfalls helping soften the more sterile feel of the laboratories right next to them. The journey through the structure even extends below ground at various points into tunnels both natural and man-made. A large underground grotto festooned with machinery is particularly impressive. 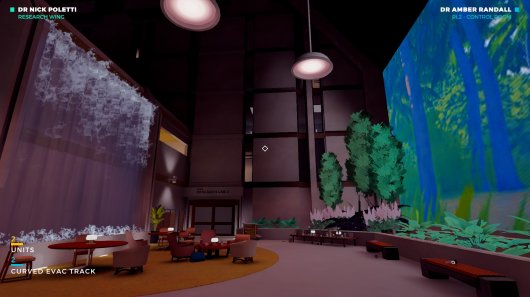 Visually the game has a pleasingly stylized look. The geometry of both objects and environments has a nice degree of detail without being too demanding on your hardware. What’s most distinctive, however, is the texturing, which is kept quite simple. It doesn’t look like a cartoon but it doesn’t strive for photorealism either, settling comfortably somewhere in between. The clean visuals are a boon to navigation and being able to spot likely candidates for interaction even at a distance. For the majority of the game, you travel by yourself without ever seeing a single soul except in paintings on the walls. Later on you do encounter Amber in person, although she’s mostly seen from afar, which is good as her model’s more than a little creepy.

With Amber along to aid you, The Bradwell Conspiracy is a single player adventure that feels like a two-player game. There are some obstacles and puzzles you will be able to overcome yourself, but I found the scenarios that required interactions with my companion to be more interesting and satisfying. There’s also a good degree of variety here, from both you and Amber taking pictures of your respective sides of a door lock, to using Substance to create mirrors that allow Amber to guide a laser beam to various destinations. Save for a few simple 3D printing tasks, all of the challenges I encountered in my five hours of play time felt quite unique from one another, while using the same basic mechanics.

The audio is mostly comprised of ambient sound effects, interrupted occasionally by either the Guide or Amber talking. The voices are well done, with the Guide sounding like a male version of Alexa and Amber conveying a friendly warmth that I found made her relatable and easy to get along with. Occasionally short musical riffs come into play that reminded me of jazzy tracks of the sixties. These typically happen when first entering a new area, and in more than one instance I wondered if they were being played by a radio or sound system somewhere in the building. However, they don’t last long enough to be really memorable, quickly giving way to the relative silence of your own movement through the different spaces. 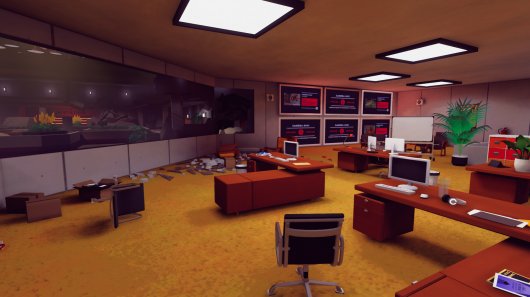 While The Bradwell Conspiracy is quite fun on the whole, there are a number of bugs and glitches and a few minor design choices that take a bit of the shine off. Several times when viewing books scattered about, I got stuck in close-ups of their covers. Weirdly, I found I had to Alt-Tab out of the program entirely and then back in to get free. The game also follows the lamentable trend of having only a single progressive checkpoint save. Unfortunately, I encountered a couple of occasions where the save game symbol appeared on-screen but had not, in fact, recorded anything. I never lost more than perhaps ten minutes of progress but it was a bit worrisome nevertheless. Configuring controls is also fiddly. While you can play with a gamepad, I preferred the mouse and keyboard. However, I found the mouse sensitivity initially too high. It took me a few tries to get it comfortable as whenever I went in to tweak it, it kept resetting to the default. Then I made the mistake of wanting to change the key mappings, which again resulted in the mouse sensitivity being reset.

Other minor issues bled into the gameplay itself. While I was reading some in-game computer emails, Amber would occasionally interject with some comment about the puzzle I was supposed to be solving. Not only did this break my concentration, if I was scrolling an email when one of her comments happened, the hold on the scrollbar would be lost and the document would jump back to the top. Ladders also proved troublesome for me as they operate differently from many first-person games, requiring a button to be pressed to get on rather than simply bumping into them. Worse was getting off after climbing up. For some reason, more often than not when reaching the top of a ladder I would find myself dropped back to the bottom to have to climb it again. Finally, at various points I encountered locked doors that would arbitrarily become unlocked after solving certain unrelated puzzles. While not a bug per se, doors that I’d registered as inaccessible suddenly opening up with no warning or causal link left me wondering what to do next a few times, as I didn’t think to go back and check those entrances for no apparent reason.

The Bradwell Conspiracy weaves a compelling mystery based on present-day environmental and political concerns with a healthy dose of science fiction thrown on top. It also has a welcome two-player vibe with Amber as a nicely voiced companion character, even though it is strictly a single player game. The slightly simplified visuals are distinctive and despite being confined to one complex, they pack a surprising amount of variety. While the ending is a little too cut-and-dry for my tastes and the production is a little rough around the edges, on the whole I found it quite an enjoyable adventure that should particularly appeal to those who want that co-op multiplayer experience but find it hard to coordinate play sessions with someone else.

With a fun off-screen companion and an interesting story to delve into based on real-world concerns, The Bradwell Conspiracy is a fairly enjoyable experience even if a weak ending and an assortment of glitches hold it back from its full potential.

GAME INFO The Bradwell Conspiracy is an adventure game by A Brave Plan released in 2019 for Apple TV, iPad, iPhone, PC, PlayStation 4, Switch and Xbox One. It has a Stylized art style, presented in Realtime 3D and is played in a First-Person perspective.

What our readers think of The Bradwell Conspiracy