The Death of Erin Myers review

The Death of Erin Meyers by Viperante is a first-person slideshow-style adventure game that starts off by informing you that the eponymous character is already dead and you must find out how and why she died. To do that, players must revisit nine of Erin’s memories and solve various inventory puzzles found in each location. The premise is that of a whodunit detective story which manages to capture the ambience of an urban mystery. However, at only about an hour in length the story feels rushed, a fact that is not helped by the effortless puzzles that make the experience all-too-fleeting instead of a resonating drama which comes through meaningful engagement. The big reveal at the end is relatively easy to predict, but more importantly it fails to create the emotional reaction it strives for as there just isn’t enough time spent in the game to really care.

The game is entirely mouse-controlled, the right button providing information about hotspots and the left being the action command. You can click on various objects to interact with them, collect the ones you can carry, and then combine those items in inventory or with others in the environment. For example, very early on you find yourself locked in a bathroom so you can only use the objects available to get out. This approach wouldn’t be a problem in itself if it weren’t for the lack of effort needed to solve the puzzles and move forward. Each location is comprised of two or three screens maximum, which means that the items you can interact with are quite limited in number as well. Even if you have no clue about what you should be doing, through trial and error you will pretty soon reach the solution.

This simplicity takes away a significant part of the player's engagement with the game, as you do not have the chance to develop enough investment to be affected by how the story eventually plays out. This is further undermined by the non-linearity in the progression of the narrative. The nine memories you must visit include seven real events and two dream-sequences of Erin in order to uncover the mystery of her death. These memories are all interconnected, leading up to the final revelation, but they are not experienced in chronological order. Instead, you play the scenes one after the other in a mixed timeline, except for the first and last. 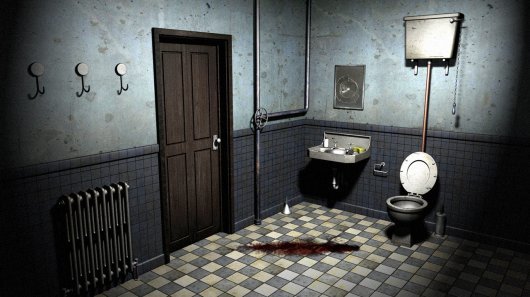 This fragmented structure is supposedly meant to facilitate the mystery by increasing your confusion, yet the design choice feels more like a contrived gimmick than a justifiable narrative device. There is no reason that the events should not be visited in the right sequence. Arguably, if they did, then you would probably have more time to realize what is happening and develop some connection to the events unfolding. The trope of various pieces coming together in the last act and uncovering the final picture does not work in all mysteries. Indeed, the fact that The Death of Erin Myers is so short actually clashes with it. Not only does the sheer brevity of the game prevent caring about what is going on, keeping information from you till the very end does not help its case. Even though you are supposed to be experiencing the story through Erin herself, the effect more closely matches the point of view of a third-party observer, increasing your emotional distance from the protagonist.

Compounding matters, the issue of perspective itself is muddled. The game starts by informing you that Erin Meyers is dead, treating you as a separate entity from her, but when the game starts you’ll assume the role of Erin in various moments of her life. Yet the way she narrates each scene does not seem like the voice of Erin in that moment, but instead an omniscient Erin who, despite being dead, apparently is able to relive these events in her life. If that is the case, it makes no sense that she needs to go through this process of revelation. It is only the player who does not know what has happened, and you’ll only fully learn that at the end of the game by standing as witness to Erin’s death. As such, taking on the role of Erin in the in-between events bears no logical footing. The result is a confused focus that does not allow players to anchor themselves in the game in any way, reduced instead to largely being passive bystanders.

Despite its short length and ease, The Death of Erin Meyers tries to do several things and does succeed in some. Technically I encountered no problems, and the story features an unlikable playable character, something which is not common in games and is interesting to see. Erin’s a morally grey if not outright black persona and does not try to mellow it. In this, the game manages to create the ambience of a detective mystery with a dirty cop vibe – Erin being the cop in question. This becomes more evident towards the end, but even earlier in the game Erin has no qualms about eavesdropping on two of her colleagues or using unethical means to enter a crime scene and gather evidence. The dark-colored realism and dirty, dilapidated imagery complement this atmosphere even more, as does the uneasy-themed music. 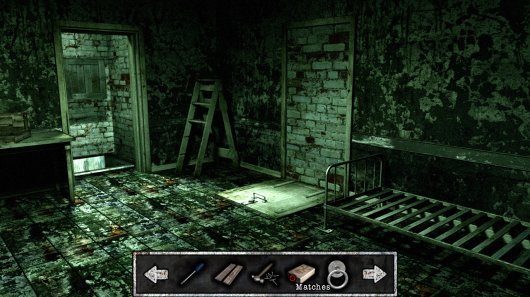 Other characters such as Erin’s colleagues at the police department are uninspired but each has their specific role in the story, which they serve decently. Nothing feels unneeded or excessive, and as such the game is successful in its short story implementation. At the same time, everything feels rushed and not enough. The mystery is unoriginal in a whodunit fashion and the twist predictable, but most importantly the gameplay is simply too easy to be engaging even as the narrative itself is lacking.

Seasoned adventure players who enjoy thought-provoking puzzles should probably stay clear of The Death of Erin Meyers, while those who like short games with minimal effort and dark, compact stories will find it more enjoyable, if still not impressive. All in all, it’s an interesting effort, yet it takes more than an inspiration to provide impactful player engagement than what is found here.

Its unusual choice to feature an unethical protagonist is welcome, but even for an interactive short story The Death of Erin Myers is too short, as the story is not developed enough and the gameplay is too easy to create the emotional impact it strives for.

What our readers think of The Death of Erin Myers