Supermassive Games has had a bit of a checkered track record over the last several years. Starting with 2015’s Until Dawn, their highly enjoyable take on campy slasher movies, the developer has largely stuck to the horror formula, dabbling in virtual reality, on-rails shooters, and crime thrillers, albeit with mixed results. Man of Medan marks a new partnership with publisher Bandai Namco and the first entry in the Dark Pictures Anthology of choice-driven horror adventures. Returning to classic genre territory with its ghost ship setting, the game is a well-paced slow burn of tension and creepy atmosphere, rife with jump scares and edge-of-your-seat chills. Though design-wise it doesn’t deviate from the studio’s familiar interactive movie feel with little actual gameplay, it does offer some replay value with different perspectives from multiple characters all forging their own way through the narrative.

True to both its spiritual predecessor and tried-and-true horror tropes, Man of Medan features a group of young American twenty-somethings, suitably obnoxious, possibly a bit entitled, and literally out of their depth. What starts as a deep-sea diving excursion on a chartered boat somewhere off the coast of French Polynesia soon turns into the youths’ worst nightmare when a band of armed men steal aboard in the dead of night and hold the group and their captain hostage. A legend of gold lost at sea drives the pirates to steer the boat and their captives toward the last-known location of an American World War II freighter which mysteriously disappeared along with its crew in these waters many years ago.

What starts as a home invasion story (but on a boat) quickly turns into a haunted house tale (but on a boat), as things on board the derelict freighter are anything but normal. Haunting sounds – beyond the already spooky noises you’d expect from an empty vessel such as this – soon give way to frightening visions the characters glimpse out of the corner of their eyes, before ultimately graduating to truly harrowing encounters with nightmarish beings. 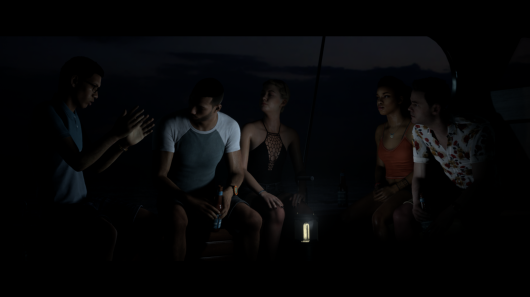 All the players are assembled and the stage set within the first few minutes. Over the course of the game, you will take control of both Alex and his socially awkward brother Brad, Alex’s girlfriend Julia and her libido-driven brother Conrad, as well as Fliss, the native captain of the diving boat. (There’s also the framing device of the Curator, a character who is ostensibly the game’s narrator as well as acting as the through-line for the whole anthology, who cuts into the proceedings to speak directly to the player from his posh study between acts.)

Once the group is aboard the ghost ship and inevitably get separated, their aim becomes one of survival, as you’ll constantly need to evade your captors, reconnect with the others, and make your escape (or die trying).  During all this, you are never privy to everyone’s point of view; like Until Dawn, which person you control directly switches frequently, and other characters will often react to things that only they have seen or heard, and not you personally.

Despite such a suspenseful setting, the game relies a lot on jump scares. That’s not to be taken entirely as a negative – jump scares certainly have their place, particularly in a tale such as this one, and the ones on offer here are pulled off very well, with edgy anticipation and truly jolting payoffs. But the narrative doesn’t capitalize very well on the creepy setting and supernatural setup. Instead, there’s a rather pedestrian explanation behind everything that the player is in on before even the characters are aware of it, which especially hampers the replay value, robbing subsequent playthroughs of much of their scare potential. 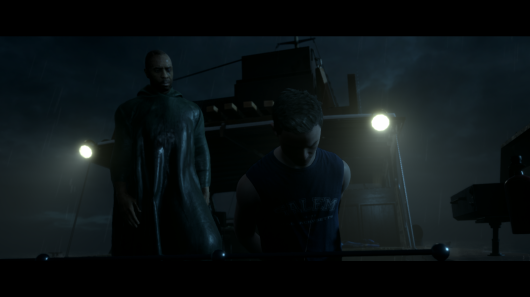 There’s also not a whole lot to the gameplay, though this is to be expected as it’s right in line with the developer’s previous efforts. There are no puzzles to solve at all, though notes, letters and written messages found aboard the ship do attempt to deliver some flavor, even if it’s generally a bit dry. Man of Medan comes close to being an interactive movie, with on-screen choices for dialog and the occasional decision between which option to perform, such as displaying prompts to either hide or run away as a foe is approaching.

You move the current character around the screen with either keyboard or gamepad (neither of which ever felt particularly natural to me, mostly due to odd and constantly changing camera angles intended to maximize the cinematic horror experience). But the ship consists largely of narrow, dingy hallways leading to cramped, dingy rooms, and there were few moments – if any – that I had any grasp on the game’s geography, so really it’s just a case of following one straight corridor after another until something happens. It’s impossible to get lost, and there are enough events and scares sprinkled into the game’s 4-5 hour runtime to keep it from getting stale.

Aside from walking and watching the story unfold, the only other bit of gameplay comes in the form of Quick Time button-pushing prompts, giving you a split-second to react in order to make something happen or avoid danger. These are virtually guaranteed to pop up during every chase scene or action moment, when one wrong button press can potentially seal the fate of your current character, but they can also blindside you during calmer moments, like when opening a door causes a shelf to fall and barricade a room if the button isn’t pushed in time. The solace here is that every action, successful and otherwise, is integrated into the story, and failing an unexpected Quick Time Event still moves the narrative along, as there is simply no game-over status – even having every single character perish is just one possible way to reach the end of this tale. 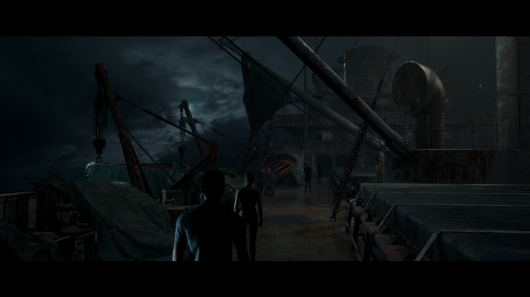 Choices made along the way do matter, and some have far-reaching effects: during one of my two playthroughs, a character who had survived the entire ordeal died in a post-credits scene due to a series of poor decisions made within the first hour of the game. Other times a character’s fate may be signed, sealed, and delivered within seconds, as I learned when someone whom I’d already gotten through a few close scrapes with death met a grisly demise (though there’s relatively little blood or gore in the game, just spooks) due to me missing a keystroke during a Quick Time sequence.

Survival is never guaranteed, and it shows great versatility on the writers’ part that the story will go on – in altered ways, of course – if and when characters die. This at least does offer some incentive to play through the game additional times, for those interested in seeing different possible outcomes. If you’d rather not restart completely from scratch, the current game can also be reloaded at the start of any chapter – say, to save a character’s life who died on you – though the subsequent game path will then be completely rewritten from that point on. There is even an extra mode unlocked after a first run that forcibly puts players in control of previously unavailable characters at times, ostensibly seeing “the other side of the game” that simply wasn’t accessible on their first playthrough. A “Movie Night” party mode, in which up to five players can take on the roles of group members and pass the gamepad when the game switches points-of-view, and a two-player online co-op mode are included too.

As well as skillful lighting that gives each room and hallway the creepiest possible vibe, Supermassive’s delivery of cutting-edge character models and animation once again comes about as close to bridging the uncanny valley as I’ve seen, though there is the occasional oddly animated facial movement – particularly those involving the mouth – that sticks out in an otherwise great visual feast. The motion capture of the entire cast is commendable, with the recognizable face of Shawn Ashmore (X-Men) among the main cast, along with a couple of quick cameos during the game’s intro chapter from familiar faces from the developer’s past titles. 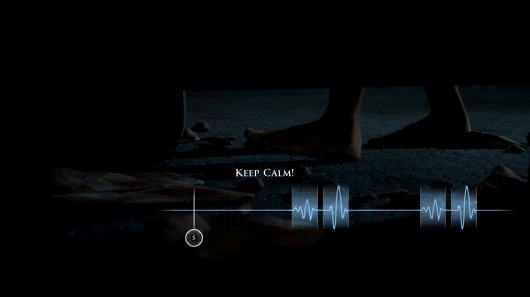 Hiring talented actors also paid great dividends in the sound department, as each one imbues their character with a believable personality via voice-over. This, however, is frequently overshadowed by a perplexing sound mix that attempts to drown out voices with music and ambient sounds. Even fiddling with the sound menu sliders wasn’t enough to fully alleviate this issue, and it’s only made worse by the decision to put all dialog through some sort of echo filter, which sounds natural enough in the bowels of the derelict ship, but has no place on the deck of a yacht at open sea. There’s a bit of salt thrown in this particular wound by the occasional line actually starting at normal levels before the filter catches up and changes the sound effect mid-sentence. I would have preferred no echo at all over having the cast’s performances at times be drowned out entirely.

Man of Medan marks something of a return to form for this developer, coming close to the fabulously campy horror of Until Dawn, and unlike its Sony-exclusive predecessor, it is available across a number of platforms. The ghost ship horror theme is a great setting for a claustrophobic slow burn, and the cast’s performance is top-notch, though these share the stage with some sticky controls and sound choices that muddy the waters a bit. In all, the scares are pulled off very well for an initial playthrough, while subsequent runs will offer different paths but suffer from players already being fully aware of what’s really at work here (though the poor characters will still be plenty frightened). The terror doesn’t bite deep down to the bone, but alone in the dark or huddling under a blanket with a few close friends, Man of Medan will scratch the itch for a chillingly good time for horror fans.

While predictably light on actual gameplay, Supermassive’s kick-off to their Dark Pictures Anthology is a welcome return to form that ticks all the right boxes for a scarily good time. Whether alone or with friends, raise the sails and weigh anchor aboard Man of Medan’s ghost ship if you dare.

GAME INFO The Dark Pictures Anthology: Man of Medan is an adventure game by Supermassive Games released in 2019 for PC, PlayStation 4 and Xbox One. It has a Illustrated realism style, presented in Realtime 3D and is played in a Third-Person perspective. You can download The Dark Pictures Anthology: Man of Medan from: We get a small commission from any game you buy through these links.
The Good:
The Bad:
The Good:
The Bad:

What our readers think of The Dark Pictures Anthology: Man of Medan

Why are QTEs still a thing?

In a choice-based game it's hard to argue that your choices really matter at all when everything can be instantly and permanently derailed by a missed QTE. This game, for me, was just a way... Read the review »