continue reading below
» Home / Articles / Reviews / Angelo and Deemon: One Hell of a Quest review

Review for Angelo and Deemon: One Hell of a Quest

There’s a reason why LucasArts and Sierra adventures are still held up as the gold standard of the genre even today. The unforgettable characters, challenging puzzles and well-crafted worlds have stood the test of time, often with a dose of humor or mystery to sweeten the deal. Looking at screenshots or reading a description of Specialbit Studio’s Angelo and Deemon: One Hell of a Quest, it's easy to assume you'd be in for a similarly entertaining ride that manages to channel the best parts of what makes the classics classics. Unfortunately this proves to not be the case, as the game is an unfunny and unsatisfying experience almost from the beginning to its sudden, sequel-baiting end.

The extent to which Angelo and Deemon fails to coalesce is not immediately apparent as the first few minutes present an interesting – even promising – concept. Already weary at the end of a Friday night shift, Death has one last stop to make, one final soul to collect before turning in for the weekend. Stopping by an apartment building, he accidentally chooses the wrong door to knock on, misled by a faulty apartment number. The hapless occupant, a social media blogger named Angelo, seems to think nothing of his odd visitor’s intentions, even welcoming the opportunity to produce a travel vlog for his fans and followers.

This setup isn’t without its humorous charm, and an early inventory sequence in which Angelo must find a way to charge Death’s cell phone in order for the pair to travel into the Ever After points towards some very traditional, even clever item-based puzzles. It isn’t until Angelo ditches Death only to immediately be paired up with his sidekick – the very urban, hip-hop-spewing imp Deemon – that the game starts to stumble. What begins as a promising homage to the giants of the genre becomes a frustrating mess of irritating characters, poorly-clued puzzles, and lots of needless backtracking, with attempts at comedy that fall completely flat, bar none. 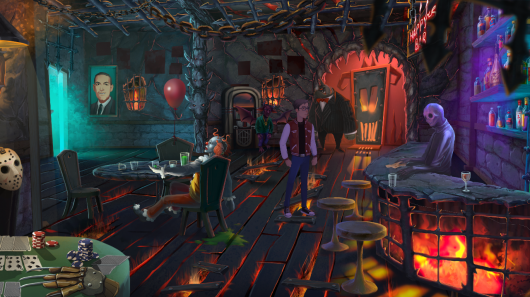 Even navigation is cumbersome, as the travel map that eventually becomes unlocked only provides access to certain locations. You have to manually walk through multiple other screens just to reach an island that is plainly visible on the map screen! Double-clicking doesn’t help much either, as it only makes Angelo quicken his pace for a few steps before returning to standard walking speed.

An even bigger hurdle standing in the way of enjoying the journey of these two oddball characters is the baffling missteps of the narrative. For starters, Angelo and Deemon suffers from translation issues; while this isn’t an uncommon occurrence in adventure gaming by any means, the degree to which it occurs here really hamstrings even a basic sense of immersion in the moment-to-moment experience. One can only imagine what must have gone through the actors’ minds (to the game’s credit, it is fully voiced) when asked to record some of the incomprehensible gibberish present here.

Then again, it’s entirely possible that no actor ever saw a full script, or even complete lines in context, as dialog is bewilderingly broken down into various snippets, with only a few words recorded at a time – even simple sentences are frequently split into multiple distinct phrases, strung together to ape whatever syntax the line was meant to have. This results in an endless stream of unnatural pauses, odd inflections, and inappropriately-placed emphases. It forces you to make constant mental corrections and there doesn’t seem to be any evident reason why the voice-overs had to be so horrifically butchered. 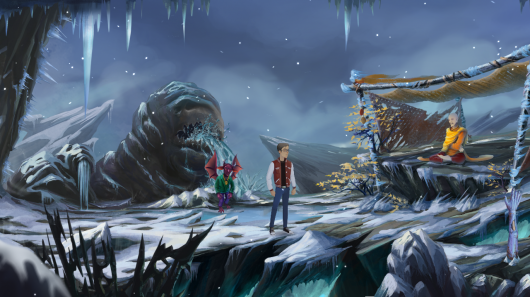 Puzzles, which suffer from plenty of issues of their own, aren’t immune to the fallout caused by the wonky translation. One particular dialog challenge, in which I was tasked with answering several personality questions to persuade a bouncer to let me into an exclusive bar (ironically named Happy’s), kept failing for me despite the fact that I was choosing replies that made me sound as callous and spoiled as possible, since Angelo specifically indicated I should come across as rich and self-centered. As it turned out, that was precisely the opposite of what I truly needed to do, gaining entrance by answering humbly and humanely at every turn.

What finally led me to the correct solution was that I broke down and made use of the built-in hint system, a feature that sees Angelo consult his cell phone for advice on the current situation. This can be used freely and without penalty, though it only provides help for the screen you’re currently on. If getting unstuck requires an action or item in another scene, the system will simply let you know there’s nothing to do in your current location – leaving you to aimlessly revisit each available scene and jam the hint button again in increasing frustration. The game’s puzzles range from fair to senseless, so expect to make use of this feature repeatedly.

Angelo and Deemon is at its best when its flow of progression, however fleeting it may be, allows you to visit a new location and solve more intuitive puzzles via single mouse-clicks to examine or interact with objects, dragging items from inventory for use where necessary. It’s just that these moments seem too widely spread out, generally not allowing for more than a few moments of satisfaction before the next frustration presents itself to bash your head into for a good while. In fact, at least half of my four-hour playtime was spent searching for the next solution – or sometimes even the next puzzle to crack – to move the story along. Ultimately, neither Angelo nor Deemon’s goal on their visit to hell is ever concretely stated, so you’re just left to proceed through one puzzle after another, hoping it’ll all lead somewhere in the end. 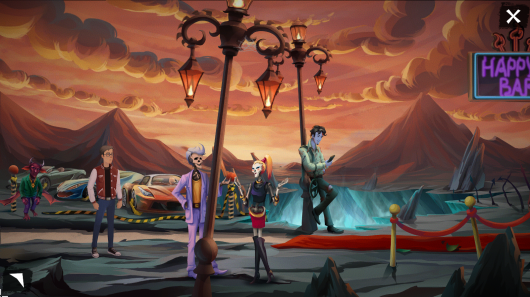 Although it largely stumbles over its attempts at humorous dialog, the game is somewhat more successful with its environmental designs of visually interesting locations: the sole snowy mountain peak where hell truly did freeze over, a railway terminus dead-ending in the middle of nowhere, a graveyard of derelict machines of war. A good number of pop culture references and Easter eggs have also been built right into the backdrops, as Happy’s Bar is patronized by a frightful clientele straight from the silver screen of slasher movie cinema judging by the trinkets some of them have left behind, while other recognizable relics like Thanos’s Infinity Gauntlet and Marty McFly’s DeLorean can be found elsewhere.

The graphic design also benefits from the generally attractive hand-painted artwork and color palettes used, although select transitions between locales are laughably shoddy, such as when a boat carrying our heroes suddenly zips “across” the water to the next destination like a piece of clipart on a kite string. The game also struggles to elevate itself through its audio, with fairly forgettable music cues, tiresome soundbites, and no real standouts redeeming the vocal cast.

Angelo and Deemon: One Hell of Quest is clearly trying to recreate the good old days of point-and-click adventure gaming, but while it often has the appearance of a Golden Era favorite, it falls far short by almost every other metric. Rather than a memorable comedic romp through the underworld, we instead get unfunny, unrelatable characters solving frustrating puzzles (or resorting to using the equally unsatisfying hint system) in order to achieve an unknown objective – all of which leads not to a fulfilling payoff, just a “See you in the sequel!” message. Only some interesting location designs and the occasional gameplay satisfaction when things briefly click keep this one from being consigned to an eternity in adventure game purgatory.

Angelo and Deemon attempts to pay homage to the classic age of adventure gaming, but outside of a promising early premise it fails to deliver on its potential. Between frustrating puzzles and an exasperating translation, there are few reasons to travel down this highway to hell.

GAME INFO Angelo and Deemon: One Hell of a Quest is an adventure game by Specialbit Studio released in 2019 for Linux, Mac and PC. It has a Illustrated realism style, presented in 2D or 2.5D and is played in a Third-Person perspective.