DarkStone Digital’s The Subject is a game that manages to deliver what it says on the box – sci-fi horror about navigating a maze and solving logic puzzles – but unfortunately wastes an interesting narrative premise that could have lead to more than that. In the far future, the overcrowded prisoner population is handled as though they were nothing more than trade goods, with interstellar corporations making fortunes through the sale and bartering of inmates. Players take on the role of one such expendable convict, shipped off to a clandestine research facility floating somewhere in space and forced to run a gauntlet of mental challenges without ever knowing why. As intriguing as this setup sounds, the game is underwhelming in its execution, though it stops short of ever becoming outright bad. Instead it’s an example of a good idea let down by needlessly frustrating gameplay mechanics.

The Subject is one of those run-don’t-fight horror games, casting the player as an entirely helpless human test subject dropped into an oversized rat maze. The antagonist – a shambling hulk made up of gray flesh and a set of what appears to be novelty-store Hillbilly Teeth – doesn’t come into play right away. After completing a short tutorial section that has you arbitrarily shift around some wall panels to test out the controls, your character is dumped into a sort of command center, from which the maze’s four wings branch off. Each wing contains a test room that holds that section’s main puzzle that must be solved, with smaller button and keycode puzzles unlocking doors and corridors that link all four wings together. This eventually opens up the entire facility into one sprawling labyrinth of hallways and rooms that must be navigated – and, in some cases, dashed through in a mad bid for escape.

Long before the entire network of passages and puzzle rooms is accessible, there is a sense of something having gone terribly wrong here. Splashes of blood stain various walls and floors, and a large ominous cryo chamber sits sealed in the main control center, threatening to open at any minute to unleash what's within. But it’s only after you have explored the bits that are initially available in each wing and solved the first couple of button and code puzzles that the facility opens up and the monster is released. 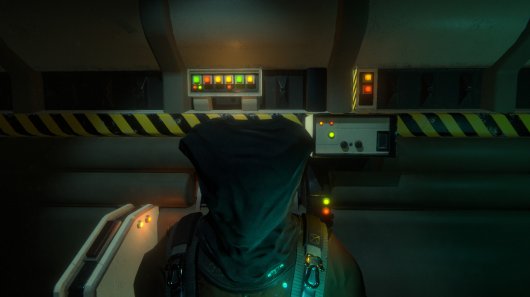 From here on out, The Subject becomes a game of cat-and-mouse. The creature roams the entirety of the facility, with you being its sole target. Having no means to defend yourself, your only choices to avoid discovery are to hide out of sight, or to freeze immediately when you hear its telltale growl and hope it decides to turn away and hunt elsewhere (which strangely works quite often). Running, of course, is also an option, though the monster is quite fast and will give chase for a good while. In the end, encounters with this deadly entity are inevitable, and it ultimately becomes one of several invisible timers the game keeps running behind the scenes to interrupt player progress. Often it may actually be preferable to let oneself be killed and simply restart at the most recent wall-mounted checkpoint used.

The in-game lore supports this by forcing test subjects to constantly upload their vitals at stations scattered throughout the facility, fitting you with some sort of implant that will kill you should you fail to check in for a certain length of time. These frequent mandatory saves were likely meant to ease frustration at losing too much progress in the event of an attack, but in practice they just serve to declaw the monster. During my four-hour playthrough, however, there were two instances when the creature and save system didn’t play nice together, the first being when I was unexpectedly killed right after solving one of the main puzzles, forcing me to complete the puzzle all over again, and another when I activated a save station while the creature was in the same room with me, spawning me right back in front of him each time the game reloaded.

To the credit of DarkStone’s solo developer Brian Clarke, a casual game mode has been introduced in the months since The Subject’s initial release. Based on early player feedback, this mode smartly does away with both the invisible timer that forces frequent saving and the hide-and-seek element introduced by the roaming monster, giving players a chance to purely focus on the puzzle solving and atmosphere, with no cheap deaths or jump scares to detract from the experience. Unfortunately, it is impossible to switch from one mode to another without restarting the game and losing all progress already made. 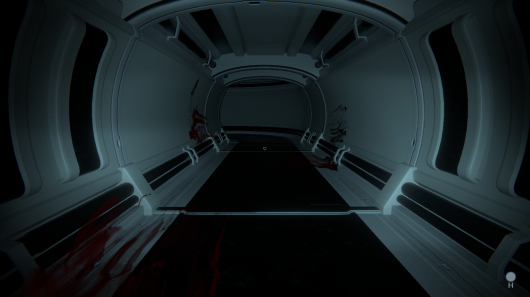 Whichever mode you choose, this is one of those games that offers absolutely no explanations of what to do or where to go, letting the player figure everything out for themselves. In the case of most of the puzzles, it’s not too difficult to discern a way to manipulate control panels or enter number code combinations, but there are times when signposts are far too obscure, and there’s a fair bit of guesswork required before even the intent of a puzzle starts to become clear.

While it may seem that simply solving each of the four wings’ puzzle rooms is the true aim of visiting them, it’s actually just as important to retrieve a microchip from each that is automatically slotted into an inventory item picked up within the facility. Collecting all four of these together eventually becomes vital to progressing, but there is never a hint that they’re needed, and nothing even subtly alerting you to pick them up, their small size making them quite easy to miss.

Other nebulous objects exist within the station as well, including a number puzzle that is entirely optional and a proliferation of buttons that make noises when pushed but serve no further function. This unnecessarily confuses things when you reach an impasse, unsure of what exactly needs to be accomplished in order to proceed. On the whole, though, there is at the very least some satisfaction in ferreting out what exactly each puzzle is asking of you, and then pursuing that train of thought to its ultimate solution. 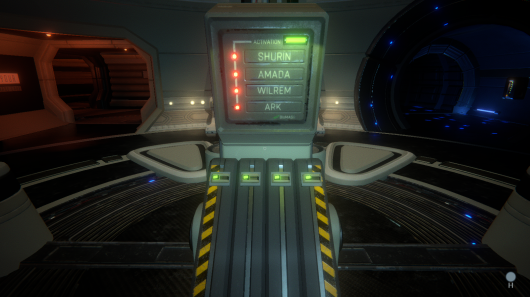 Using standard keyboard/mouse controls, the free-roaming first-person navigation works well, though turning left or right seems the slightest bit choppy. The combination of a sprawling facility with an unclear path of progression obviously necessitates random searching and plenty of backtracking. Complicating matters is that the entire place is designed as a labyrinth, and even the rudimentary maps occasionally displayed on the walls aren’t as helpful as they should be, giving only a general sense of location and completely missing many connecting passages between sections. It is up to your own sense of direction and memory to deal with the twisting halls, and it doesn’t help that quite a few of them are completely dark. This requires the use of a flashlight that drains quickly, dimming as it loses power, though it can be recharged at a different dedicated wall station, introducing yet another invisible timer to the mix. (The developer has discussed plans for altering the labyrinth to  make it “easier to navigate,” though at time of writing that update has still not yet been implemented.)

The Subject does achieve the level of creepiness it’s going for – at least until the monster goes from threatening to annoying – as the game both looks and sounds quite good. The sterile, bright glossy hallways contrast nicely with the darkened sections lit only by subdued running lights; a blackened hallway suddenly reveals itself as streaked with gore with the flick of a flashlight button; and the naked metal maintenance tunnels connecting the common sections of the ship look a bit as though the developer indulged his inner Ridley Scott during the design phase. Unfortunately, the same level of unease doesn’t apply to the monster, which looks so humorously caricatured that one or two face-to-face encounters with it are enough to rob it of its scare potential, making it nothing more than an unwelcome stumbling block from that point forward. 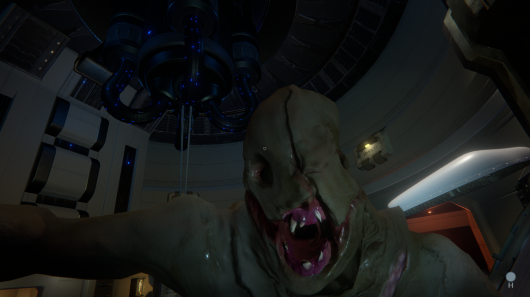 The ambient sound design also heightens the overall eerie sense of anticipation. Music is largely absent during gameplay, giving way to the reverberating echoes of far-off machinery and life support systems, and the grunting and howling audio cues that alert you to the monster’s proximity – except, of course, in casual mode, where the monster is simply nowhere to be found, and yet even then one never feels quite at ease as a lab rat in this clinical atmosphere, knowing you’re the one being experimented on.

In some ways, The Subject itself feels like a test run of a larger concept still in the works. Certain elements work well, notably the solid production values and the sense of satisfaction at solving a difficult puzzle, but there is too much frustration at having to figure out the intended path of progression on one’s own. The prowling hunter and invisible timers set up within the game very quickly wear out their welcome, and it doesn’t take long before the monster completely loses its impact and becomes an irritation to deal with. The new casual mode will be a welcome tweak for some players, but the trade-off is that it may leave the sprawling complex with not enough content to fill its empty void. Ultimately, this is a game that doesn’t quite push far enough into either the horror or puzzle direction, and as a result ends up being a decent, if not quite great, proof of concept rather than a fully fleshed-out sci-fi adventure.

The Subject tries to take the helpless cat-and-mouse horror of games like Amnesia and meld it with player-guided puzzle solving, but doesn’t push either angle as much as it should. The result is a middling mix of both, though a welcome casual mode implemented post-launch at least puts the focus on gameplay over survival.

GAME INFO The Subject is an adventure game by DarkStone Digital released in 2018 for Linux and PC. It has a Illustrated realism style, presented in Realtime 3D and is played in a First-Person perspective.

What our readers think of The Subject 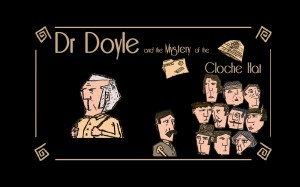 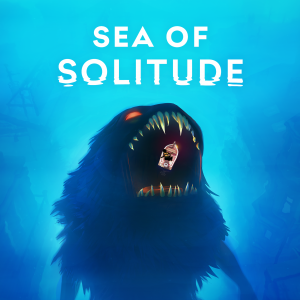 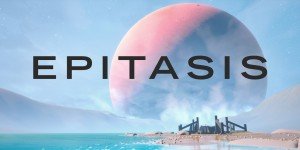