Darkness Under My Bed

Note: Though the article content is the same, the review of Bad Dream: Coma has been published separately with its own individual rating.

Between March 2017 and November 2018, indie developer Desert Fox indulged the darkest corners of their imagination with two nightmare-fueled forays into a fictional dream world in Bad Dream: Coma and Bad Dream: Fever. While the two games aren’t directly connected by either plot or characters, they seek to evoke the same sense of uneasy dread from players, and certain elements remain constant throughout. Both games are fairly short-lived experiences, but they offer some morbid interest and are engaging enough while they last. This is particularly evident in the sequel, which benefits greatly from lessons learned in the areas of narrative structure and puzzle design from the more experimental first outing, as well as from an array of standalone freeware episodes released in the preceding years.

Each game does its best to live up to the series’ moniker by sending players through interactive representations of logically disconnected dream states. This is felt far more keenly in Coma, which pulls you through an assortment of random locations. There’s hardly a narrative worth mentioning, apart from the game starting with you lying in bed before the very literal nightmare begins, your only real goal being to reawaken from the dream at the end. Between these two milestones, there’s simply no rhyme or reason to the environments or events you’ll encounter along the way, much like a real-life dream. 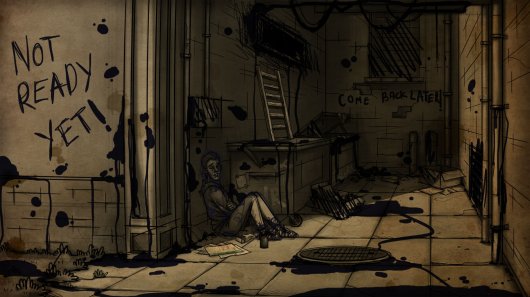 Coma is broken into chapters, with each taking place in a whole new locale like a bridge, a hospital, or a graveyard. The objectives to accomplish vary by scenario, but always come down to achieving whatever is required to be able to leave, whether that means finding a way to cross the dilapidated bridge or help the patients in the hospital.

Fever feels a bit more structured, actually presenting a cohesive world complete with a map screen and several locations to travel between, including a school, a park, and a construction site. This world has recently been infected by a strange plague that has killed most of its inhabitants, leaving them and even some entire areas covered in a strange ink-like substance. You of course are roped into helping find a cure by its last living resident, a girl in a plague doctor’s mask. Though this entry provides more solid footing for the poor dreamer in contrast to its predecessor’s constant sense of drowning in the flimsy nothingness of dream logic, even Fever devolves into a meta headtrip before the end, abandoning all pretense of coherence.

While both games control in standard point-and-click fashion, Desert Fox has taken full advantage of the absurd nature of dreams to twist the moon logic that traditionally afflicts the genre even further, creating some quite unintuitive, though not uninteresting, knots of reasoning. For example, in order to solve a particular puzzle in Coma’s hospital, it is necessary to access a computer and run a floppy disk on it, but a virus infesting the workstation makes this impossible. It becomes necessary to use the nearby wastebasket as an intermediary between the dream world and the PC’s Recycle Bin to transfer medicine onto the workstation and eradicate the digital virus. 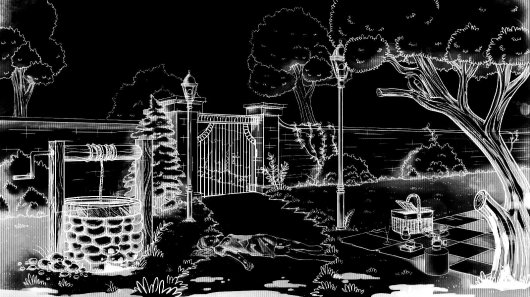 The Bad Dream games play out in a first-person view of static scenes that can be navigated using on-screen markers. Each installment features the ability to pick up items and select them from an inventory bar to use them on objects within the world, but you can also interact with a number of things in the environment directly by clicking on them with the plain mouse cursor. While doing so in Fever may elicit sound effects but serves little to no real purpose, the earlier Coma places greater emphasis on this mechanic due to its increased focus on choice and consequence. Clicking on birds, for example, reduces them to bloody pulps of meat and has an effect on what future choices or endings are and are not available. The system is never explained very well, and there’s really no way to know in advance what impact an action will have (this is how I inadvertently cut off an immobilized hospital patient’s toes with a butcher knife, which I honestly felt immediately terrible about), but it is there for those who wish to tinker with anything they might have missed on repeat playthroughs.

Oddly enough, considering that both installments are designed to feel surreal, I found the games were at their most enjoyable when they simply allowed me to use rational thought to work out solutions to their inventory-based puzzles. When they stray from this mold, the results range from curious oddities like an early spot-the-difference scene in Coma to the senseless nitpicking of a late puzzle spent covering decapitated doll heads with a cloth to gain entrance to rooms in a cottage – why should a doll’s dead stare keep me from entering a room? Fever is, on the whole, quite a bit more reliable in delivering a more intuitive experience, though it too suffers from moments of design lunacy.

The thing that will probably catch most people’s attention right off the bat about both games is their raw pen-and-ink graphical design. Coma, for instance, looks like somebody has simply taken an aging legal pad and pencil in hand and sketched out scenes that landed in the game. That’s not to call them sloppy, or even cheap; plenty of care was taken to elevate the simple art style with heavy shading and texture, and even differently-hued backdrops to represent specific settings. There’s something unsettling about the grubby, intentionally shabby locations and characters you meet along the way that feels apropos. In these living nightmares, it’s hard to know the good from the bad, and those poor souls doomed to spend their existence here have little reason to look anything but horrid and haggard. 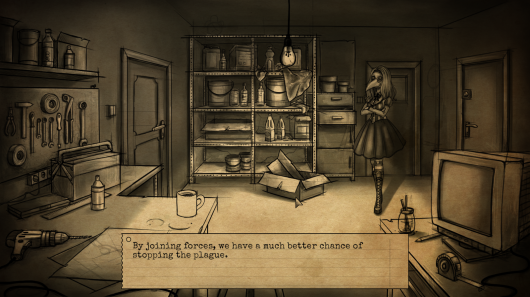 Though still done in the same style, Fever certainly ups the ante with far more detailed environments and a much better sense of dimension. The ink plague infesting the city is often menacingly present, dripping from rooftops and oozing out of the corpses of the deceased. It even plays an active role in threatening your safety by expanding to cover more and more areas, at times limiting where you can visit. The two games use color very sparingly, generally in ways that highlight violence and suffering. Similarly, music only serves to underscore the unsettling atmosphere, taking the form of moody background tunes and frequently giving way to complete silence.

For most games, calling them an alienating experience would be far from a compliment, but for the Bad Dream duology this quality is precisely what they’ve been designed for. At around three hours each, these strange, otherworldly puzzlers really do provide the feeling of being stuck in some sort of… well, bad dream. At the same time, they are forced by this very design decision to walk a fine line not to completely turn off the player. Coma, with its multiple choice-influenced paths, is the more ambiguous of the two, which can easily lead to feeling a bit aimless and unsure of what’s expected. Fever, on the other hand, feels slightly more grounded but allowed me to get stuck more often simply because I missed a crucial item somewhere and had to go back to hunt for it. Each adventure adheres to the philosophy of “check everywhere, all the time,” as needed items appear where they previously didn’t exist and scenes can change slightly, seemingly on a whim.

Despite a few repeating character models, Fever doesn’t require a familiarity with Coma to be enjoyed. No matter which game you pick to start, however, both should be approached with very specific expectations in mind, as they offer very unusual experiences that require the right mood and mindset. As far as surreal adventures go, each Bad Dream represents a competent venture into the bizarre, though in a slightly different way. Coma’s loosely-defined objectives and narrative are perhaps a little too dreamy, while Fever provides a more self-confident format that is less likely to leave players scratching their heads in bewilderment within the first five minutes, and features an overall higher level of polish than its predecessor. With their disquieting presentations and at times equally disturbing subject matter, these games do a decent job of providing several hours’ worth of mild nightmare fuel for players ready to sleepwalk a little off the beaten path.

Bad Dream: Fever is available at:

Bad Dream: Fever rises above its predecessor due to several design improvements. While staying true to the nightmarish concept and the leaps of logic that entails, the sequel offers more solid footing for those willing to take the plunge into the surreal.

GAME INFO Bad Dream: Fever is an adventure game by Desert Fox released in 2018 for Mac and PC. It has a Stylized art style, presented in Slideshow and is played in a First-Person perspective.

What our readers think of Bad Dream: Fever

First of all This game is too meta and almost ruined the other experiences for any old Bad dream fan. Doesn't have the environment bad dream gave.This game either takes itself too seriously or not... Read the review »

Loved Coma, let down by this one

I totally disagree with the "official" review. Bad Dream : Coma was wonderfully designed, where different endings meant totally different experiences and ways of solving things during the game, with many secrets on top of... Read the review »