continue reading below
»   Home  /  Articles  / Reviews  / Bear With Me: The Lost Robots review

Bear With Me: The Lost Robots review

We get a small commission from any books sold.
All Bitmap Books
Written by
Merlina McGovern — August 29, 2019

He’s hard-boiled. His woman, she done him wrong. He’s a fixture at the local bar, knocking back one bottle of carrot juice after another. And he has the cutest tufted fur ears in Paper City. He’s Ted, the stuffed bear detective, and he’s back looking to solve some crime. In Bear With Me: The Lost Robots, Ted and his new sidekick, Flint, set out to discover why all of the robots of Paper City have been disappearing.

In this prequel DLC episode from Exordium games, Ted and Flint start in medias res, both standing in a movie projector room. A smashed bottle of Ol’ Carrot Hill drips sadly on the floor. Ted is recovering from a knock to the noggin, and now you have to figure out how to get them out of here. Flint is the older brother of Amber, Ted’s companion from the original episodic trilogy. Flint shares info that the robots of Paper City have gone missing, so before long Ted sets out to get to the bottom of the mystery by heading over to Lifty Workosky, the city robot union leader to find some answers.

The voice acting for Lifty is entertaining as she gruffly gives Ted the lowdown on the robotnappings, sounding as if she’s an exasperated civil servant from Brooklyn. The same gravelly-voiced actor from previous episodes reprises his role of Ted. He’s all one-liners and world weariness. Ted can call someone a bastard one second, and in the next he shies away from cursing as he says “Holy sheet, kid, you actually pulled it off.” The one weakness in the acting performances is Flint. There’s a bit of flatness and low energy to his character, and while he plays straight man to Ted’s sardonic wit, he lacks the pathos and depth that Amber possessed. 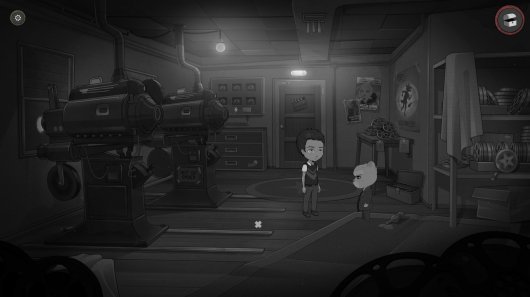 The various city denizens you meet, on the other hand, more than make up for this lone misstep. There’s Eeks the rat, a tailor and a poet whose urbane tones belie his current homeless situation. Sam, the city reporter with his hat pulled down over his eyes, makes a reappearance along with his high-pitched voice and slight lisp. The robots all have added distortion that makes them sound rather roboty, but they each still manage to have their own personalities. Fixy Mender (starting to see a pattern with all of the overly literal names?) has a ‘50s Rosie the Riveter look, with a kerchief tied in her “hair,” which is a large curly spring swirling from her forehead. She’s got a sweet but tough voice with a hint of what sounded to me like a brogue. Then there’s Harold Mackerel and Barry Barracuda, two black market fish thugs that sound like a crime duo straight out of an old noir film.

Amping up the beautifully hand-drawn, black and white visual stylings are the plentiful animations. There are lots of fun details throughout the game, like little strips of paper flapping in a ceiling vent or when Ted’s ears wiggle after he’s been standing around for a while. A bright neon sign atop the Chrome El Dorado junkyard shop spews glowing exhaust fumes into the night sky. The sound work is also nicely detailed. You can hear the whip whip whip of a filmstrip flipping around its spool and the crackle and pop of a small fire in a trash can. There’s some nice music throughout that generally matches the scene as well, like the funky jazz pouring out of a jazz bar and a piano piece swelling as an emotional character’s eyes well up with tears.

Navigating the sights and sounds of Paper City is pretty straightforward and hasn’t changed really from the previous outings. The cursor transforms to a magnifying glass over hotspots you can observe, and a pointer finger will appear if you can interact with an object, at times picking one up and storing it in your inventory. You can also turn knobs or move switches you encounter. A minor annoyance: If you want to use something you’ve acquired, you have to click and hold it to drag either to another inventory item you want to combine it with or something out in the environment. It would have been easier if you could just click once to hold an object and then again to release it. 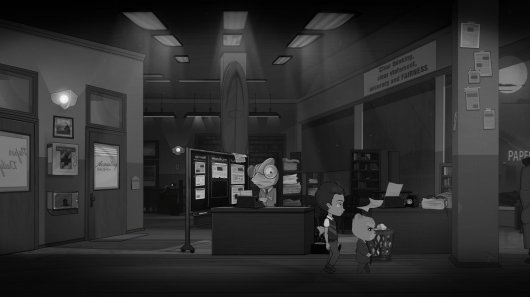 It’s the kind of thing that Ted might even remark on in a bit of meta whimsy. As before, Ted makes knowing remarks with a wink and a nod, and he might helpfully suggest that you keep looking if you haven’t found everything before leaving the room. One of the early puzzles has an actual signpost that uses icons to offer a hint about what to do, and Ted comments that the clue is kind of blatant. Ironically, for me anyway, the hint wasn’t really all that blatant, because it still took me a bit to figure out. When Flint chastises Ted for throwing a shovel into the river after they’ve used it, Ted quips about the fact that you might need it again (which, of course, doesn’t stop you from throwing it away).

The Bear With Me trademark humor is also back, with witty banter flying fast and furious between different characters. I actually laughed out loud when Ted and Flint were arguing about who’s going slower, and Ted snapped: “I’m shorter. I take shorter steps; it’s physics.” The two protagonists bicker like an old married couple, but still manage to help each other out. Other characters get in on the action too, like when Ted as usual gives the wrong name for Flint (“that’s Barney Darney; he’s a carney”), to which Fixy responds: “Shut your boozehole!” The humor spills over into visual gags as well: an airborne Ted leaves a Ted-shaped hole in a glass window, which had me howling as one character noted, “Ted, why is your life so farcical?”

Ted lives out his farcical life amidst the same Paper City backdrop, but this time with a wide range of new areas to explore, like Paper Daily, home to the city’s newspaper and the neurotic reporter OCD (remember what I said about the literal names?). You’ll also head over to the Dredge River bank to search for some stinky camembert cheese and chill with old Eeks. As you make your way through an old junkyard, clicking on a ton of different old cars, pop culture references sprinkle around you like rain. (Hey look, it’s the Love Bug! And is that the Scooby Doo Mystery Machine?) Hooray for me for getting the references, but as Flint astutely points out, anyone who’s not an old geezer may not get the references. 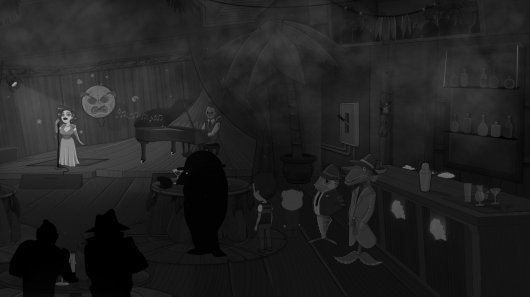 Elsewhere the Jungle Jazz bar’s patrons are shady characters, literally. Like they are just black silhouettes sitting around tables. One of the most fun settings is the Illuminarium, a ‘30s-styled warehouse that has a very Cuphead-esque mascot: a smiling lightbulb named – you guessed it – Bulby. Here robot arms ending in puffy white gloves move boxes around the factory, while giant springs sproing to and fro.

The large number of scenes serve as the backdrop for a straightforward inventory-based puzzling adventure. You’ll also confront some environmental obstacles that require interacting directly with objects to create a distraction, for example. There are some minigame puzzles, like a paper jigsaw and moving a crate down multiple conveyer belts by pressing the right series of buttons. These tasks are never very difficult, and Ted will give you clues for each wrong guess you make. There is one dialogue puzzle where you have to answer a character’s series of questions correctly. I may not have been paying attention, because the answers weren’t readily apparent to me, and I ended up just guessing my way through.

Solve enough puzzles and help enough characters and you’ll eventually discover the mystery behind Paper City’s missing bots. There’s also a deeper story about Flint and Amber that you’ll get into as you progress further along, though I can’t give too much away because it’s a fairly large spoiler for the main Bear With Me trilogy. (If you plan to play all four then I suggest leaving this bonus episode until the end, even if chronologically it comes first.) You’ll learn more about Flint here, but because this is a fairly short DLC chapter at nearly three hours of play, there’s just not enough space to delve into his background too deeply. Ted starts the story by reminiscing about his on again, off again relationship with Betty, throwing himself into this investigation after a particularly bad break with her. I found myself wishing I’d gotten to explore more about their tumultuous relationship, but it’s all conveyed through hearsay from other characters and a bit of solitary monologuing from Ted. Still, I was genuinely surprised at the ending to The Lost Robots whodunit, and had a fun time laughing both with and at Ted as he worked his way through the many mysteries of Paper City one more time.

Bear With Me‘s DLC prequel episode The Lost Robots is an entertaining addition to the Paper City universe, with plenty of stylish laughs surrounding an intriguing whodunit.

GAME INFO Bear With Me: The Lost Robots is an adventure game by Exordium Games released in 2019 for Android, iPad, iPhone, PC, PlayStation 4, Switch and Xbox One. It has a Stylized art style, presented in 2D or 2.5D and is played in a Third-Person perspective.

What our readers think of Bear With Me: The Lost Robots