If I could bottle the spirit that must go into making every Amanita Design game, I’d be very rich and happy. The Czech developers behind beloved indie titles like Machinarium, Samorost and the recent CHUCHEL have done it again with their latest title, Pilgrims, creating an infectiously joyful romp across a beautifully hand-drawn 2D kingdom of dragons, kings and princesses, without even writing one line of dialogue. Sure, it’s a short trip, but the unlockable achievement system and gameplay mechanic that sees you building a card deck of objects and characters to combine with different environmental elements at will means there’s plenty of replay value. And with such fun to be had boozing with priests, fighting bears and cooking up potent magic mushroom formulas, who wouldn’t want to return?

The story itself is slight but perfectly told using Amanita’s trademark combination of pictograms in speech bubbles and spoken gibberish, wonderfully performed to match each character’s personality. A beaming cleric speaks nonsense in a high-pitched sing-song tone whilst a monarch sounds regal and haughty. You play a traveler desperate to be taken down the river on a boat by a sleepy old hag, but to stay awake she needs a particular type of songbird. So you set out to search for it, given free rein to explore the map from a bird’s eye view and choose your next location.

Drop into a particular point on the map – a pub, a pond, a castle and so on – and you’ll be taken to that locale, where you’ll get to use the game’s inventive card-based system (a variation of the one originally introduced as a minigame in Samorost 3). After a short skippable cut scene, which normally lays out what you need to achieve, you can decide to play one of a number of cards in your collection. Rather than a traditional inventory, the objects you pick up – a gun, a pot or a bunch of flowers, to name just a few of the dozen or more in total – and the characters who join you along the way – a beggar, a thug and even the devil – are transformed into a playable deck at the bottom of the screen, to be used in whatever combination you like. 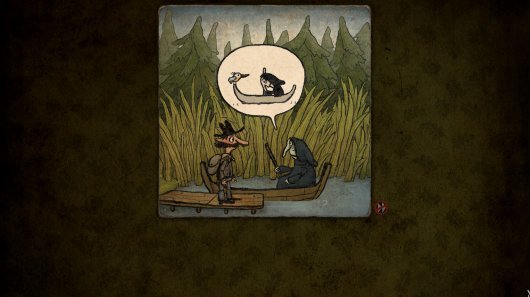 For example, you might arrive at the pub and decide to play your pilgrim card. By clicking and dragging the card onto the scene, you select him as the character you want. Next, the bartender indicates you need money if you’d like a beer (typical!), so you drag your coin card up and now the pilgrim pays for a drink. Not all the puzzles are as simple as this – there’s a bit of to-ing and fro-ing between locations to get what you need (you won’t always have the required cards at hand and will have to go find the necessary objects somewhere else first), but everything is fairly easy to figure out and doesn’t require too many leaps of imagination. There are different ways to progress through the game, so whilst you do have to complete a quest for each character you collect (help the devil capture someone’s soul, get the beggar a house, etc.) to eventually find that blasted bird, there’s more than one way of getting to the end goal for each.

As well as just experimenting to see what reaction using every different object with every character has, what really opens the game up to endless opportunities for mischievousness and creativity is that the cast react differently depending on who you choose to play in each setting. Return to the pub and select the beggar and you’ll get a beer on the house – which when combined with another paid-for beer with your coin card results in getting far more sozzled than you ever can as the traveler and unlocking further hilarious animations. It’s a simple take on the typical adventure game system of finding and combining objects with things to solve puzzles or just for fun, which fits really well with the primitive fairytale setting.

Alongside the quirky dialogue of gobbledygook is a full score by Tomas Dvorak, also known as Floex, who previously composed for Amanita games such as Machinarium and Samorost 3. It’s a mix of live instruments and organic electronics played to excellent comic effect according to what’s happening. For instance, get the beggar blind drunk and suddenly the cheerful music slows and stutters, notes stumbling over themselves, much as your character does. Accompanying the individual context-specific sound effects, the score builds to create an evocative and whimsical soundscape that manages to get to the heart of every monster, hero or civilian effortlessly and wordlessly. 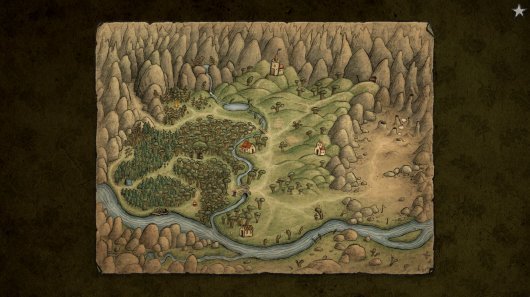 As with their music, Amanita rarely fail to provide the goods when it comes to beautiful backdrops and Pilgrims is no different. Each character’s card is adorned with little details highlighting their abilities and goals, the traveler’s depicting a little boat and a speech bubble to highlight his skills at persuasion, amongst other symbols. Likewise every location is hand-drawn in a muted colour palette, reminiscent of the illustrations you might find in a traditional children’s book of fairytales. The action all takes place in a fairly small window in the middle of the screen, presumably to accommodate mobile platforms, but even this ends up further adding to the storybook picture effect.

Every new little animation (cheer up a leprechaun, feed a fish man – just your usual goals) unlocked after achieving an objective fills in a separate card deck in the achievements menu. There are 45 achievement cards to collect overall, and in one playthrough I managed to find only 19, meaning whilst you might “finish” Pilgrims you won’t have truly completed it until you’ve played it through at least a couple of times. That’s just as well as it’s a short game: I reached the end my first time through in just over 45 minutes. Like with all the best games I play, I tried to eke out as much play time as possible and was sad when it finished so quickly. It would have been fantastic to have a few more locations to explore or characters to collect and play along the way, mainly because it’s such fun whilst it lasts.

Alas, every journey must come to a close and so it is with Pilgrims. The finale concludes fairly abruptly, perhaps because this is a game made for replaying, so there’s no time to dwell too much on the end before it’s back to the beginning again. Those looking for a deep, branching story arc or complex puzzles would do well to look elsewhere, but you’ll be missing out on one heck of a game if you do. The pure upbeat energy and creativity poured into every facet of Pilgrims means that even as one of Amanita’s shortest adventures, it still manages to shine amongst the developer’s best.

Pilgrims is available at:

A slapstick romp through a stylish kingdom of loons and beasties, Pilgrims’ simple but inventive card-based inventory system and replay opportunities turn a slight game into a journey you’ll want to complete again and again.

GAME INFO Pilgrims is an adventure game by Amanita Design released in 2019 for iPad, iPhone, Linux, Mac and PC. It has a Stylized art style, presented in 2D or 2.5D and is played in a Third-Person perspective.