Review for Moons of Madness

“Cthulhu in space!” was my immediate thought of Moons of Madness after seeing its trailer earlier this year. Being a fan of all-things-Lovecraft, it’s no wonder the prospect of getting a good fright from Rock Pocket Games’ eldritch-themed cosmic horror adventure had me smiling from ear to ear when I showed up for my demo appointment at E3 soon after. And yet, despite being an easy recommendation for likeminded players now that the full game is here, it turns out its focus isn’t on creating scares so much as building tension and fleshing out a well-crafted science fiction atmosphere of dread and mystique, with some commendable production values from the first-time developer.

Shane Newehart is the Chief Engineer on the Invictus research station, currently located on Mars to search for signs of extraterrestrial life. The game proper begins after a brief introductory chapter in which players partake in one of Shane's increasingly frequent nightmares, wandering the deserted corridors of the Invictus while experiencing strange visions and noises. You'll wake up to find that the majority of the facility's small team of inhabitants are busy off-site in order to prepare for an event that breaks the everyday monotony: the arrival of a resupply ship. It’s not long before the sounds of shuffling footsteps from around the nearest corner or the next room over, always just out of sight, alert Shane to an unknown presence nearby. It seems he is not as alone as he thought, and today will be anything but ordinary.

Moons of Madness is a bit of a slow burn at first, with these early moments establishing the setting and its crew through a number of mundane tasks you must complete, though these soon give way to more and more disturbing events as it becomes clear that things on Mars are decidedly not as safe and dull as they first appear. Whether it's uncovering the disquieting truth behind the experiments with plantlife aboard the Mars station, being chased through ventilation ducts by some horribly mutated nightmare creature, or stumbling across foreboding ruins of uncertain origin within the wastelands of the red planet, the game sends you down a spiral of ever-increasing cosmic horror heavily inspired by, and in some cases directly referencing, the works of H.P. Lovecraft. 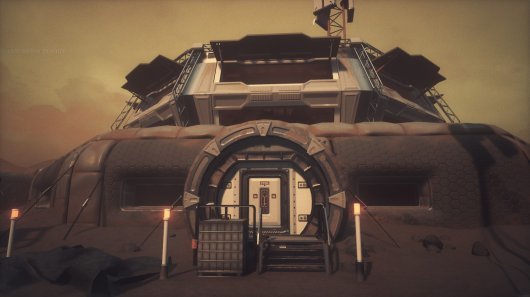 Controlled via traditional keyboard/mouse setup, the game is played from a free-roaming first-person perspective, so you’re put right into Shane's shoes – literally. When Shane dons a helmet in order to safely step onto the surface of Mars at numerous points throughout the story, tilting the camera down slightly shifts the view within the helmet to show the readout of his vitals and remaining oxygen in the tank. Despite allowing full control over the protagonist, however, the action is structured in a very linear fashion, using things like passcard-sealed doors to funnel you along a predetermined path of progression.

Apart from a few panic-inducing moments, Moons of Madness is all about immersing you into its space thrills, slowly tightening the screws by building suspense as you explore. Those who rush through every room and tunnel will lose out on some nice world-building touches like readable emails, letters and diaries from the crew that litter the Invictus, though the scenes themselves do their share of storytelling as well. The viewport in Shane’s cabin features some personal notes stenciled across it, and messages written on dry-erase boards provide further insight into everyday life aboard the research station. It’s equally fascinating to follow a crewmate’s descent into madness via successive journal entries as it is carefully examining his work area.

Of course, when Moons of Madness eventually veers away from the relatively cozy living quarters aboard the facility, ejecting you out into the air-starved Martian desert and ancient alien structures completely unknown to mankind, the atmosphere changes dramatically. Mars is an inhospitable place, made more so by the twisted horrors lurking in its shadows, and there’s no shortage of disturbing imagery, both man-made as well as of darker, unfathomable origin. 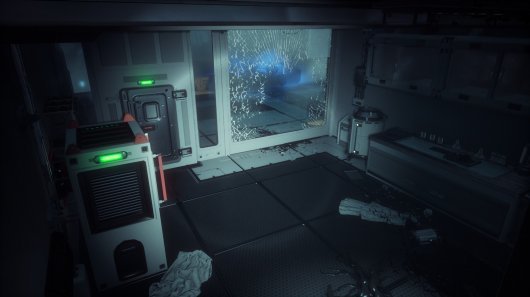 Several styles of horror are featured here without leaning too heavily on the tropes of any particular one. Rather than in-your-face violence and gore, it focuses more on psychological terror and subtle hints of something going seriously awry. Thorough investigation allows you to trace the gradual spread of corruption, both physical and mental, as the station begins to transform and individuals succumb to insanity, laid bare by their own personal thoughts. The experience largely eschews traditional survival horror elements and trades in more frequent pulse-pounding frights for a constant sense of heightened anxiety and occasionally even wonder.

Shane is unarmed, with the exception of the occasional inventory item, so there is no combat to come to grips with. Even the flashlight that’s acquired almost as soon as the game begins is an unlimited resource, and can be toggled on or off at will without danger of losing battery power. That’s not to say the journey is an altogether benign one, though: the red planet’s hostile terrain, not to mention its lack of breathable atmosphere, poses a real threat. Running for your life or sneaking to avoid danger are required a handful of times, but are easily managed (and in any case, checkpoints are plentiful when danger is near). Far more interesting are encounters of the non-lethal kind, for example with a tendril-like appendage dubbed "The Filth," which advances menacingly from the rear but shies away when faced head-on, requiring all movement around it to take the form of slowly backing away lest it stretches its tentacle-like body towards you from behind.

Coming face-to-face with hostile creatures only takes up a fraction of your time. The gameplay is generally centered on exploration and following the breadcrumbs to piece together what’s truly happening on Mars, what macabre events have taken place on the Invictus, and just exactly how Shane fits into all of it. Some tasks along the way require useful items to be found, like a crowbar for prying open stuck doorways or a power cell to provide electricity to downed machinery. Once an object has been obtained, the game utilizes a contextual cursor to automatically use it in the appropriate locations – no inventory menu needs to be navigated. 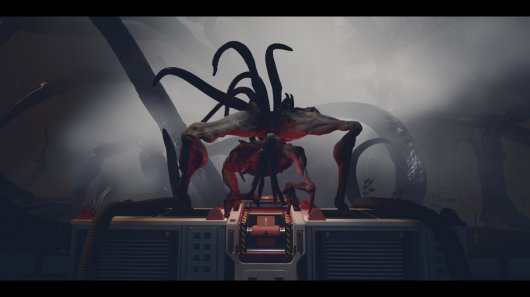 A couple of actual puzzles do show up here and there, such as manipulating a control console to provide specific amounts of power to different areas, or combining various substances with a centrifuge to create a substance poisonous to the infestation running amok on the station. Fortunately these are always integrated into the story and never serve to take you out of the experience. The challenge level is kept fairly low too, so that no puzzle really acts as much of a roadblock to hinder progression; even locked computer terminals requiring passwords are quickly circumvented following a search of the nearby surroundings.

The 3D graphics are crisp and clean, meshing well with the sterile design of a corporate space station yet managing to look appropriately grubby as the corruption spreads. While the personal touches aboard the Invictus are visually engaging, it’s some of the sights you’ll see while visiting the company’s more far-flung locations that especially stand out. There’s something wondrous about cresting the top of a rocky ridge on an alien red desert planet to see an expansive array of top-tier communication satellite dishes all aimed up at the sky.

Most impressive are the little animated flourishes bringing the experience to life, such as the way Shane’s heartbeat indicator rises when he runs or is stressed, or how his hands shake so much when he’s frightened that it takes him multiple attempts to hook up his oxygen tank’s resupply hose. Noticeable attention has also been paid to how the lighting makes certain scenes more cinematic, such as when an eerie green glow, seemingly emanating from the bowels of a foreboding cave you have to enter, lights up the landscape, or how the horizon gradually grows apprehensively dark as the game’s climax – and an eclipse of Mars’s titular moons – approaches. 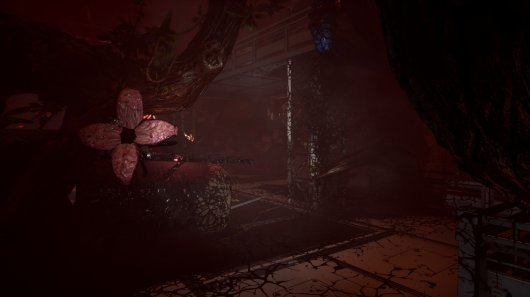 Sound design is no less commendable, with believable voice acting for all dialog and suitably creepy atmospheric music to set the mood. The designers have smartly heeded the concept of “less is more,” letting pregnant moments of silence help generate tension rather than over-relying on the well-placed sudden jump scares to catch you off-guard. (I laughingly had to admit to several “gotcha!” moments during my playthrough.)

A slight knock in the audio department is the obvious use of the same voice actress performing several prominent roles within the relatively small cast of characters, involuntarily breaking my immersion on more than one occasion. But this is more than made up for by some commendable bits of writing. As madness settles in, it’s not uncommon to come across personal diary entries or even messages scrawled on walls that successfully mimic the kind of author’s voice and cadence that Lovecraft himself would undoubtedly have approved of.

Overall, Moons of Madness delivers a highly satisfying experience following the footsteps of the Great Old Ones, distinguishing itself by moving away from the usual safe familiarity of Earth’s atmosphere and into that of Mars instead. It isn’t an out-and-out fright fest, as Lovecraftian horror isn’t meant to be, but it has just enough scares to spice up the already tense atmosphere established throughout. With quality production values, a slew of memorable moments, and an engaging story and world to discover, it’s six or so hours well spent, and an easy recommendation.

Moons of Madness is available at:

Moons of Madness ditches the cold New England setting of Lovecraft’s eldritch tales for the dry, arid wastelands of Mars, and what results is a textbook example of how “cosmic” cosmic horror truly can be.

GAME INFO Moons of Madness is an adventure game by Rock Pocket Games released in 2019 for PC, PlayStation 4 and Xbox One. It has a Illustrated realism style, presented in Realtime 3D and is played in a First-Person perspective.