Adventure games by One Bit Studio

The link between roleplaying games and adventures is a close-knit one, with both sides championing the importance of storytelling but complementing that with different gameplay emphases. Enter One Bit Studio, a one-man developer whose indie debut A Long Road Home has adapted the RPG Maker software to bridge the gap between genres. The game may look like a 16-bit JRPG, but its sprite-and-tile-based visuals instead accompany a point-and-click adventure, with the combat usually associated with this aesthetic completely absent. Its narrative and world-building aren’t the most arresting to dive into, but it does manage to be engaging at times with its item manipulation and exploration-based puzzle solving.

A Long Road Home has a rather high bar of entry that must be cleared before its more worthwhile elements have a chance to come to the forefront. Players are cast in the role of an unnamed young man who awakes in an unknown village after being gravely wounded, separated from the mother and sister he had been traveling with. While the protagonist’s immediate reaction of “gotta find my family” makes a lot of sense, it’s the story threads that follow that quickly dampened my initial narrative buy-in. After first solving a series of seemingly senseless logic puzzles within the village itself – procure some ingredients for the local doctor, talk a guard into paying an overdue debt – and in the subterranean ruins underneath it, everything culminates with you being sucked into the memory flashback of a long-forgotten god who sees you as its last chance at justice. None of it seemed to connect together, and really turned me off for quite a while.

The unclear plot progression is only part of the initial problem and isn’t even as irksome as how finicky the controls and various systems can be while trying to carry out its objectives. Completing just the early series of tasks in the village of Monenheim, for example, incorporates a variety of goals such as purchasing goods from a store (which never pops up again in the game), interacting with townsfolk, examining hotspots and perusing books within the environment, reading notes and letters within the inventory window, combining acquired objects, solving dialog puzzles, and cracking a scrambled alphabet code. 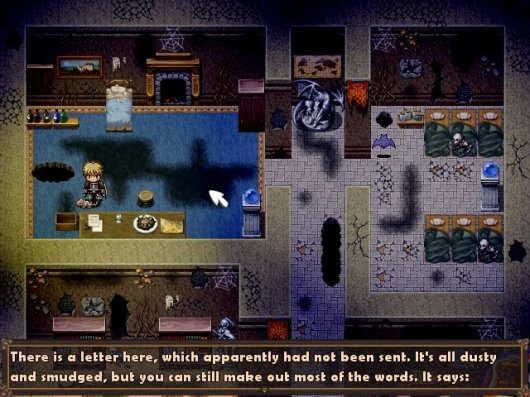 All that would be intimidating enough right off the bat, but especially so while I was still coming to grips with both the game’s lore and its control scheme. The latter is cumbersome in its own right; for instance, there are two separate inventory windows – one for combining and examining items, the other for actually using them – and object usage requires not only standing in the right spot but also facing the right direction, leading to some needless trial and error. Locating every interactive object in the environment requires scrolling the mouse pointer around the screen, since it changes appearance when hovering over an object of interest. Except when it doesn’t, which, as the game’s tutorial will tell you, is an intentional design decision, making some key items harder to find. The mere fact that there is a multiple-page tutorial available prior to starting the game to teach you how to play a point-and-click adventure may be the first warning sign that things are about to get a little over-designed.

It’s a shame that this early bombardment of meticulous gameplay systems may turn players away before the fun has really had a chance to set in, because there is entertainment to be found here, to be sure. The narrative is never amazing, but becoming embroiled in a clash between the benign deity Nasri Ishta and the forces that rose against it, all while simply trying to reunite with your family, is interesting enough to see the 6-8 hour experience through to its conclusion. Puzzles, once you get the hang of how to best deal with all their variants, are also enjoyable and keep throwing in new permutations, like a sliding block challenge, locks with number codes that must be sussed out, and a few others that keep things fresh.

The back-and-forth between being a pleasant experience and being aggravating extends into almost every facet of the game, however. The writing is fairly well done, but there are spelling and grammatical errors in nearly all text boxes – never so grievous as to hamper your understanding of what’s going on, but noticeable nonetheless. The music stands out as especially well-composed, evoking atmosphere through the use of classic and setting-appropriate instruments like harps and pianos, but tracks are on such a short loop that their repetition makes them get old very fast. 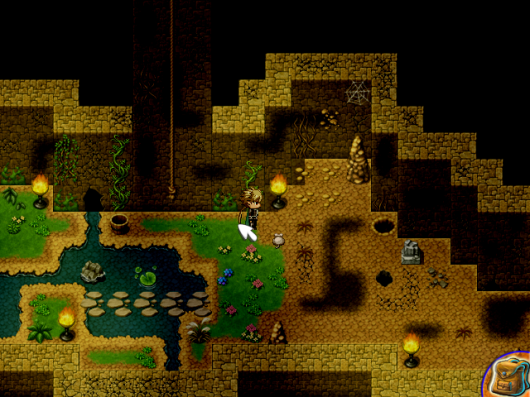 I liked the detailed look of the character sprites, which even held up when toggling from the game’s rather small windowed mode to full-screen and viewing them up close. Environments too are colorful and diverse, ranging from dank mineshafts to lush estate gardens, but many are so crammed with odds and ends that it looks like the software’s decorator tool threw up all over the place. This, of course, also directly impacts gameplay by making it more of a chore to sift through all visible objects to find the ones that are actually interactive.

Not many games give me a feeling that something is somewhat askew like A Long Road Home does. Perhaps it’s my brain’s inability to divorce the familiar overhead JRPG pixel art from the unexpected point-and-click puzzle gameplay. Maybe it’s due to being thrown into an unfamiliar world without preamble and expected to navigate its lore without the proper prerequisite knowledge of the setting. But even with these issues compounded by unnecessarily clunky mechanics, moments of enjoyment still shine through, the puzzles standing out as particularly noteworthy. Simultaneously pulling players in both directions between frustration and fun, the game ends up occupying the gray middle ground of averageness, much the way it splits the difference between RPG and adventure.

A Long Road Home won’t be everyone’s cup of tea and may even attract the altogether wrong audience given its JRPG aesthetic, but there are enough positive aspects that a good time shines through from time to time.

What our readers think of A Long Road Home