Werewolf: The Apocalypse – Heart of the Forest

At the beginning of the year my dad went on an epic four-month cruise trip around the world. As he progressed in his latest attempt to become Manchester’s answer to Phileas Fogg, another collection of photos would drop into our WhatsApp conversation. There he’d be, a tiny outline against the majesty of Egypt’s pyramids or snorkeling through the clear blue waves of the Coral Reef – and the less said about the occasional shot of him lazing in a hot tub the better. Playing Wanderlust: Travel Stories had the same effect as those multitude of holiday snaps, in that it was so engrossing an interactive travelogue that not even halfway through I found myself booking a holiday of my own just so that I could be the one experiencing something new and exciting for a change.  (Your tourist tips for Reykjavik, please!)

This narrative-driven text game, made up of over 300,000 words and inspired by real-life accounts, will grab any small part of you that longs to be a free spirit and won’t let go. Like any excursion into the unknown, there are blips here and there – one or two of the tales do begin to drag near their end and the photographic backdrops don’t always shine. For the most part, though, the detailed descriptions brilliantly fling you from your armchair to halfway across the world, and the choices provided allow you to effect some influence on how the experience plays out.

The game begins with five strangers: Adilia from Portugal, father and daughter Henry and Henriette from the UK, Martine from Germany, and Tomek from Poland, all meeting on Easter Island. They recognize in each other kindred travelling spirits and decide that they’ll meet every night during their stay to hear each other’s respective stories of the journeys that changed them. The discussions between them and the tales themselves all take the form of scrolling text on the left-hand side of the screen, against a backdrop of actual photographs. Much like in the fictional text adventure 80 Days, there are choices to make that shape how each person responds both in the present and within their own story. And like in inkle’s lauded globetrotting adventure, sometimes those decisions are as basic as selecting whether your current character drinks a beer or a cocktail in Bangkok, while others, like deciding whether or not to rat on a deceitful crewmate aboard a ship bound for Antarctica, can have altogether more dramatic consequences. 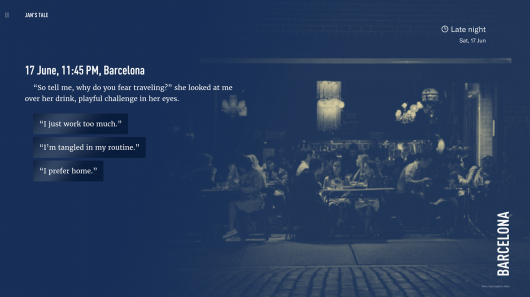 After chatting amongst the group you’ll be taken to an overview of the globe for the start of a new chapter. There are four main segments in Wanderlust lasting between an hour and up to four or five hours each, plus four smaller “anecdotes” that take around ten to fifteen minutes. That’s a lot of text, but the writers at Different Tales have done a good job of making most of those paragraphs exciting to read. Drag your mouse around to one of the countries with a story and you’ll be greeted with a romantic, James Bond-like title (“Today Is Always Gone Tomorrow,” “This Isn’t A Love Story”) of the journey you’re about to embark on.

Each story is set in a different part of the world and follows our travellers at a different stage in their lives. Tomek’s main adventure explores love and spontaneity in Barcelona and other European cities. Henry and Henrietta’s experiences intertwine as the father takes a luxury cruise (whose dad would do such a thing?) around Antarctica, whilst his daring daughter plots a far more challenging path through the frozen seas on a small working ship. Martine’s tale follows the German in her younger years discovering Thailand and herself on a gap year adventure. And Adilia’s expedition sees her crossing Africa and wondering where she fits into everything following the death of her best friend. Throw the extra anecdotes into the mix – a sweatshop in Bangladesh, rusting war planes in Papua New Guinea, and trolls and whales on the Faroe Islands to name just some, and there’s a large collection of narratives to immerse yourself in. Each feels very fresh compared to the last and can be played in any order you see fit, though once you’ve launched into one you’ll have to play it to the end before you get to move onto another.

It’s not only dialogue or action options you get to decide but other elements of your trip too. My favourite story, Tomek’s, starts with the timid Pole entranced by a girl he’s just met in Spain. Having managed to pluck up the courage to ask her out for drinks, everything seems to be going just right but when buying another round he returns to find nothing left but the Polaroid the pair took together with the intriguing sign off to “meet again one year later, same time, same place.” The story proper picks up almost a year later back in Poland, when Tomek determines to step out of his humdrum life, do something spontaneous and travel across Europe to see if his mysterious crush will be there waiting for him. You’re given a budget of €500 and have to choose how our Romeo will spend it to get to the Spanish city. Choose to fly and you’ll get there quicker, which might give you more time to remember which bar you met at that night a year ago (things are a little hazy), but you’ll miss out on the new people and chance encounters that travelling on a train across the continent will open up, even if the latter option means you’ve only got fine margins to make it on time for your meeting. 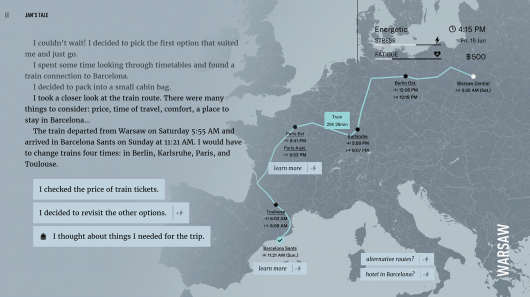 There are no actual puzzles to solve along the way, but in addition to managing money at different points for each journey, there are also stress and fatigue levels in the top right-hand corner to monitor, along with your mood. Certain narrative options you select will affect the first two bars in some way, and if they’re both high your mood will soon drop from “Optimistic” to “Sad.” As I followed Tomek’s travels towards Barcelona on the train, because I’d kept him feeling relatively energetic by choosing to nap and eat regularly in between speaking to people, at one point he reflected, “so far, so good.” Being in low or high spirits will in turn mean specific dialogue options won’t be available to choose from.

For the most part these management elements give you a greater sense of personal investment in the stories. It’s relatively easy to turn your mood around fairly quickly from even the most miserable of sulks if you want to, and there’s never a frantic feeling of death or failure awaiting you if you choose “wrongly” like in some of the options in 80 Days. Occasionally it’s a little unclear as to why an option you’ve chosen has affected your mood in a particular way – why would resisting adding paste to a meal in Thailand necessarily result in more stress? – but typically player agency works in harmony with each journey and enhances them. For some stories you’ll get the chance to pick what to wear, and even that transforms the narrative in subtle ways. Choose to buy a set of “hippie” clothes on the Khao San Road in Bangkok as backpacker Martine, for instance, and later on people you meet may reference your “free” nature.

Whilst Tomek’s story is expertly paced and builds to a thrilling “will they, won’t they” finale, one or two of the others do suffer from feeling a tad longer than they need to be. Perhaps it’s because I found Martine’s youthful naivety less endearing than the older travellers’ offerings, or simply because it’s the longest chapter in the game, but I began to grow weary near her quest’s three-quarter mark. I can’t fault the quality of script, however, which always paints a grand picture of the modern world and its breathtaking beauty – perhaps unsurprisingly given that it’s written by the creators of The Witcher alongside seasoned travel journalists. Cape Horn is dramatically portrayed as “destroyer of ships, eater of souls,” whilst the calm activity on board a ship after an epic storm in the middle of the thrashing ocean is perfectly described as “just the wind in the ropes, the water slapping the hull, our hushed conversations.” It really does take you to the heart of what makes travelling our planet so exciting. 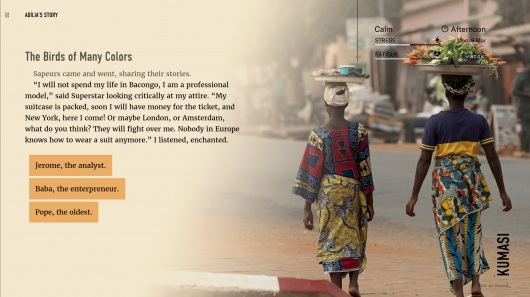 The sound design also does a good job of drawing you into each story’s little world, mainly through effects like crowd chatter or the lapping of waves against the shore, depending where you are. The occasional instrumental track floats in and out as you travel too, which inventively sounds suddenly muffled if you choose to drop off to sleep. The background pictures used to set up each scene don’t always feel quite as relatable due to their stock-photo-like blandness: a paragraph about a whaling ship run aground is illustrated simply with a fat seal on the shores on an icy coast. Start travelling long distances within a given chapter and an animated line shows your route as you move across the globe. It would’ve been great to see a bit more animation like this throughout to bring the story to life visually as much as it is descriptively.

Wanderlust: Travel Stories manages to capture the essence of travelling so well, mixing immersive text descriptions with creative strategy elements that far outshine the occasional generic photographic backdrop. As an interactive narrative it’s also memorable for its locations, characters and themes, whether it’s a twenty-something discovering herself or an introvert’s first taste of stepping out alone. It’s not an “adventure” in the traditional sense, but if you’re looking to experience an exotic vicarious vacation, this game will take you there many times over. Just please don’t show my dad; I wouldn’t want him getting any more ideas.

Wanderlust: Travel Stories is available at:

A variety of engrossing “choose-your-own” quests based on real-life travel memoirs, Wanderlust Travel Stories’ vividly written text will have you longing to start your own exotic adventure.

GAME INFO Wanderlust: Travel Stories is an adventure game by Different Tales released in 2019 for Apple TV, iPad, iPhone, Linux, Mac, PC and Switch. It has a Photographic style, presented in Illustrated text, Slideshow and is played in a None perspective.