Stop me if you’ve heard this one before: a protagonist from a lowly station sets out in pursuit of an outsized dream. Their ambitions lead them to something bigger than themselves, and after engaging in theft, property destruction and wanton disregard for others’ safety, they push beyond the boundaries of what seems possible to carve out a place for themselves in the world. You know the story, of course, as adventures have been building on this foundation since before Sir Graham first put on his feathered cap. And for good reason: the genre presents the ultimate fantasy that for every impossible goal there exists a series of workable, discoverable steps to achieve it, no matter how ridiculous or impractical they might be. Feria d’Arles, by indie developer Tom Simpson, presents a new variation on this theme with the story of Molly, a young girl with high hopes, low prospects, and quick wits. It’s over all too soon, but it’s bright, clever and charming in nearly everything it does, and it's a reminder of why some styles stay evergreen.

As soon as she hears the story of Marie Esperanto, the greatest matador in all France, Molly knows that her own destiny lies in the bullfighting ring. The fact that she's a child isn't going to stop her, so she sets out to follow in her idol’s footsteps by traveling to the town of Arles (only four hours away by autocar!), where the annual bullfighting festival (the titular feria) is about to start. There are a few problems, mind you: she’s not nearly tall enough, for one, and she doesn’t have a matador’s sparkly suit. Worst of all, girls are barred from even competing! None of that is going to keep Molly down, though—if she's ready to face down a charging bull then surely she'll make quick work of such insignificant roadblocks. Then again, the paranoid mayor of Arles doesn't much care for outsiders, and there's the mysterious Order of the Bull to worry about…

(Note: Real-world concerns about animal treatment might lead some to steer clear—pun intended; I am not sorry—of a game about becoming a bullfighter, but the game tackles these issues in a way that ought to satisfy animal lovers.) 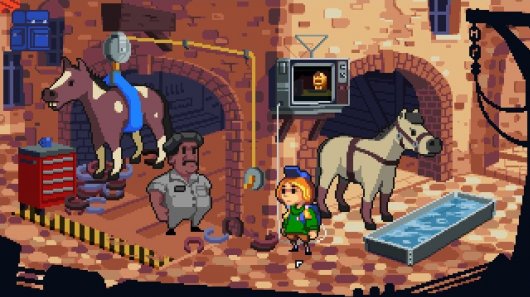 It’s rather remarkable that Feria d'Arles manages to pack so much material into just a 90-minute playtime. This world feels much bigger than the handful of rooms you'll actually explore. Every screen is filled with visual detail, and there are numerous hotspots whose raison d'être is just to add flavor or prompt a funny observation from Molly. The characters you’ll encounter are all vibrant and well-developed, from the boisterous Texan in charge of registering entrants, to the pair of rhyming bagpipers, to the sleazy souvenir dealer who runs scams with a parrot. The visuals, credited to Matt Frith and Jen Pattison, are excellent across the board. Animation is everywhere to help bring the cartoon pixel art to life: idle characters adjust their clothing or scratch their posteriors, colored lights twinkle, an inflatable tube man bobs and sways in the distance. Everything feels vivid and alive, helped along by Chris Köbke’s Mediterranean-accented MIDI-style score.

The writing, by Simpson with contributions from Nelly Cootalot’s Alasdair Beckett-King, is likewise bursting with charm and personality. Molly in particular is delightful, approaching her task and her new surroundings with an amusing mix of idealism and cleverness. At various points she’ll whip out her tourist’s guidebook to learn more about a landmark or piece of culture, usually sharing a pithy observation about the information she’s gained. (“I guess ‘famous’ means something else here,” she says, on learning that Arles is renowned for its bagpipe music.) It’s hard not to get caught up in the excitement she expresses throughout her journey; everything in the game seems designed to emphasize the spirit of adventure she embodies. Even the object descriptions seem thrilled to be doing their job, such as when the cursor hovers over our heroine and it displays the text “Molly (That’s You!)” Unfortunately, all of the dialogue remains unvoiced; while this doesn’t necessarily detract from the experience, the characters are so lively in every other respect that I wished I could hear them speak for themselves.

The only place the writing feels less than pitch-perfect is in its repeated references to previous adventure classics. Over the years it's become something of a genre convention in itself to include references to Monkey Island and its contemporaries, but this has gone on for so long and across so many titles that the practice has come to feel less like a series of fun in-jokes for those in the know and more like something obligatory that's being included simply to check a box. There’s no need to have Molly to drop a line like “How appropriate, you fight like a bull” to get players to like her; a game like Feria d’Arles stands wonderfully on its own without having to rely on nostalgic affection for what’s come before. 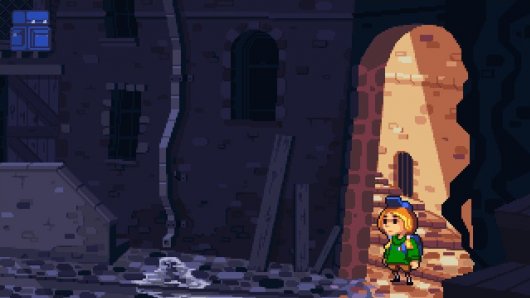 The interface is streamlined point-and-click, where a left-click interacts with a hotspot and a right-click examines it while text descriptions appear in the center of the screen when you hover over an object. Molly carries a backpack that serves as her inventory, which you access by clicking an icon in the upper left of the screen. This triggers an animation of Molly unslinging the pack and opening it on the ground before the item screen appears, which—since it happens every single time—quickly becomes tiresome. The inventory is presented via a close-up of the backpack with all the objects you’ve picked up along the way variously stuffed into, hanging out of or tied around the bag itself. It’s very in character for Molly, who’s constantly barreling toward her goal without giving much thought to the details, but it’s also visually cluttered in such a way that it's difficult to make out where a given object actually is.

There are also a few instances of poor implementation within the inventory. You’re given one item midway through the game that doesn’t actually appear in your inventory until you need to use it, but there's no reason given for this omission; before it finally showed back up I kept wondering if I’d encountered a bug. Similarly, there’s a puzzle that involves carrying a liquid in a certain container: the container’s description doesn’t change to reflect that it’s now full of that particular liquid, but if you pick up a different liquid the name does change. This led to my being unsure if I actually had what I needed to progress further.

Fortunately, the puzzles themselves strike a good balance between challenging and entertaining. Most are inventory-based and despite the small number of screens you'll traverse, the solutions never feel glaringly obvious. You'll have to think to solve them, but when you do the solutions feel fair and logical. For the most part you'll never be stuck wondering what you need to do or find next; there are a few items that blend into the background such that they're difficult to notice at first, but you can highlight hotspots with the spacebar if you get stuck. 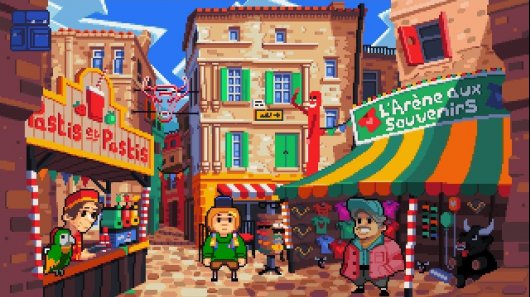 It’s really a shame that Feria d'Arles ends right as the story seems ready to kick into high gear. The finale promises further developments for Molly, but rather than serving as a tantalizing hint at a sequel, it just makes this game seem as if it's been cut artificially short. We simply don't get to spend enough time in Arles for the experience to feel complete, coming across more like a first act than a story unto itself. Enjoying something so much that you wish it was longer isn't the worst problem, of course, but it's still less than ideal and prevents you from being entirely satisfied.

Even with its short playtime and abrupt ending, Feria d'Arles is easy to recommend. It's fun to play, it's pretty to look at, and the writing brings the kind of charm, verve and cleverness one associates with classics of the genre. Hopefully when Molly returns—and I don't say if, because there's clearly no stopping her when she sets her mind to something—we'll get to spend more time in her company. Until then, though, this is a wonderful introduction to her world and a memorable addition to the point-and-click genre.

Feria d’Arles is available at:

It’s over before you know it, but Feria d’Arles is a warm and hilarious throwback full of clever puzzles and wonderful characters in a vibrant, colorful version of Provence.

GAME INFO Feria d’Arles is an adventure game by Tom Simpson released in 2019 for PC. It has a Stylized art style, presented in 2D or 2.5D and is played in a Third-Person perspective.