I’m a sucker for ye olde pseudo-medieval fantasy games that harken back to the early days of graphic adventures like King’s Quest and Quest for Glory. So when I first saw XQG Software’s cute low-poly Mazovian Adventure, I was intrigued. It turns out it’s more of an appetizer, however, with its short length and lack of challenge, than a main course. And with more than a few glitches and poor localization it’s less palatable than I’d hoped, but I still had fun with it while it lasted.

Mazovian Adventure follows the exploits of two brothers during what at first seems like a typical day. Johnny, the elder of the two and dressed as a bearded peasant, is charged by his parents to go from their quaint little farm to the nearby cobblestoned village of Garwolin in order to buy some potatoes for dinner. His brother Ricardo, sporting a knight’s helmet that covers his face, is deemed too young and small to go into town, much to his consternation.

The first part of the game involves Ricardo performing a series of pranks on his parents and grandmother in order to make enough of a nuisance of himself that they decide to get him out of their hair by sending him along with Johnny after all. Care must be taken not to get carried away with the pranks, though, because if Ricardo’s parents get too angry – as can happen if, say, you have Ricardo drop manure down the farm’s sole well – then it’s game-over. And unlike in most modern adventures, here I mean that quite literally, as when various “bad ending” scenarios are reached, the game drops you right to the desktop rather than presenting a try again option, load screen, or even just returning to the main menu. Consider it a good safety tip that if you’re about to try anything remotely questionable or dangerous, you should make use of one of the game’s four available manual save slots first. 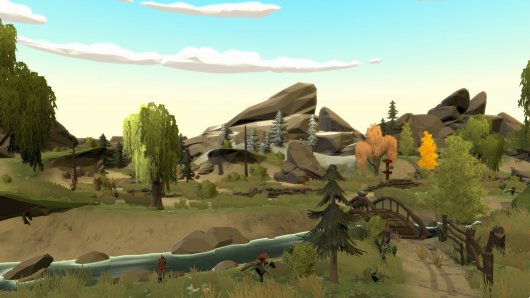 After successfully annoying his parents enough, Ricardo is permitted to accompany Johnny to Garwolin. Here control passes from younger brother to older when Johnny must negotiate with the townsfolk to purchase potatoes. There’s just one problem: he forgot to bring any money with him. It’s all rather mundane at first, but the game does take a twist for the fantastical after the spuds have been secured and a Maniek Troll rolls into town. This creature is basically a ball with a face and a helmet. The king arrives and offers to pay a handsome reward for anyone who can dispose of the invader. However, Ricardo is more interested in helping the troll, so he and his brother attempt to return the little creature to his home cave out in the surrounding forest.

Mazovian Adventure is neither particularly challenging nor overly long, clocking in at about two hours of play time. The current objective is always clearly presented, such as bothering the boys’ parents or fetching the potatoes. Most of the time there is only ever one puzzle to work on, and the pieces involved in solving it are always close at hand. Characters and other points of interest in the environments can be clicked to display a context menu of applicable action icons. There are no great surprises here, with a mouth used for talking, an eye for examining, and so on. Occasionally a few collected inventory items also appear in these menus when it makes sense to use them.

Beyond the typical point-and-click mechanics, the game also sports a physics engine, which is used in several challenges. At one point Johnny has to knock down a stack of crates in order to reach some clay pots of alcohol on top. These sections are quite straightforward, consisting of simply barging the current character into whatever it is that needs to be physically moved. Sometimes this results in things being pushed elsewhere, such as when moving a series of boulders to block some pursuing knights, while at other times it causes stacks of objects to fall over. These physics-based moments can be a nice change of pace but they are a little dicey. A couple of times the objects I was pushing became wedged so that I couldn’t move them any further to get them positioned where they needed to be. Such instances meant going back to a previously saved game in order to try again. 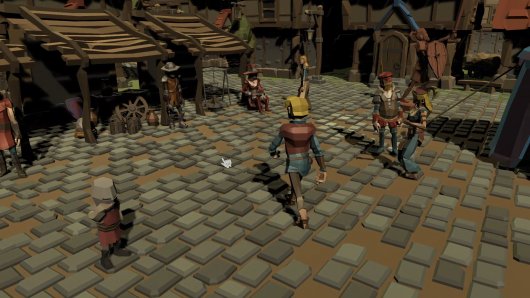 The physics aren’t the only buggy part of Mazovian Adventure, unfortunately. A variety of other glitches abound, including the characters getting stuck on world geometry, other NPCs, or in one memorable instance, on nothing but air; as well as the main menu failing to display properly after completing the game. Some of the bugs just feel like a lack of polish, such as a cinematic in which Johnny says that Ricardo has disappeared in town even though he is clearly staring right at his brother standing immediately next to him. Ricardo does vanish immediately after the cutscene, but it’s a jarring problem at the time nonetheless. I never encountered any technical issues that were complete barriers to finishing the game, although I did have to reload a couple of times in order to get past some areas.

All conversations are fully voiced in Polish and the actors sound like they do an expressive job. Unfortunately the quality of the English subtitles is weak at best, feeling rather like the result of a Google translation. Most of the time the general meaning is decipherable but the occasional wording is way out there. For example, after successfully obtaining the potatoes Johnny says, “Well Ricardo, so now we don’t need double panties.” Um, what? Fortunately, such particularly weird sayings are quite rare.

Beyond the awkwardness of the literal localization, the game also struggles with translating the intent of some of its quirky humour. Apparently in Polish the word for king is the same as the word for bunny. When the king arrives and a whole riff is done on him possibly being a furry bunny with big ears, the subtitles include (parenthetically) a side note about the dual meaning of the word in Polish. While that surely avoided some confusion, having to explain jokes is a surefire way to kill them. Yet for all that, between the exuberance of the voice-overs and the wacky translations, the dialog makes for an oddly charming experience. 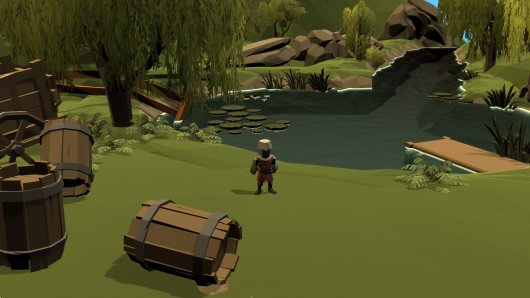 Also endearing are the dances of the two main characters. There aren’t too many games whose protagonists get to bust some moves, but here they are accompanied by sprightly tunes. Otherwise, the music is more traditional medieval fantasy fare. Apart from the brothers’ jigs, a number of characters have some nice animations, including a drunken wizard and several generic town knights with their overly exaggerated feminine walks. Ricardo too has a cute animation when made to run via double-click (Johnny, being taller, doesn’t have a run mode), the youngster flailing his arms madly as if fleeing an inferno on his tail.

The animations are especially effective at helping establish personality given that the angular 3D models themselves are low-poly and don’t have any facial expressions to speak of. The various characters and locations alike are simply and crisply done in a nice vibrant color palette. The settings never stray beyond standard tropes of farmhouses, the rustic town of Garwolin, the surrounding countryside with its streams and forests, and the somewhat foreboding mouth of the troll’s cave. Even so, they’re well-designed and a decent size for exploring without being overwhelming. It’s in these kinds of fairytale locales that the game felt most evocative of the classic King’s Quest series to me.

With its off-kilter sense of humour, clean look, and fun animations, Mazovian Adventure does have a few entertaining highlights, so it’s a shame that they rest like nuggets of gold among the dross of poor localization, bugs, and general lack of polish. It won’t set the gaming world on fire, even if its rough edges are smoothed over in future updates, but this family-friendly tale of two brothers’ adventures should provide a whimsical bit of warmth when looking for a short diversion.

Mazovian Adventure is available at:

Mazovian Adventure’s rough localization and glitchiness aren’t enough to stop the occasional sparkle of fun from shining through in this throwback to Sierra-inspired comic medieval adventuring.

GAME INFO Mazovian Adventure is an adventure game by XQG Software released in 2020 for PC. It has a Stylized art style, presented in Realtime 3D and is played in a Third-Person perspective. 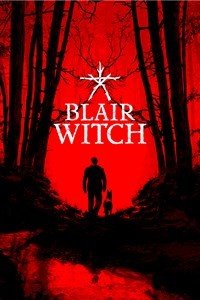