Review for A Short Hike

We get a small commission from any books sold.
Written by
Cathlyn Vania — January 17, 2020

Featherlight. That’s how it feels to soar above the breathtaking islands in A Short Hike. I fell in love instantly and wished I could stay a bit longer, fishing in the ocean and streams, climbing the steep hills and mountains among the clouds, running along the beach, and even digging up buried treasures. This isometric platforming adventure hits that comfortable sweet spot of leisurely exploration with its changing terrain, weather and a wide cast of inhabitants (in this case, fellow hikers and tourists). Although it’s as brief as advertised, it doesn’t feel rushed at all; quite the opposite. I felt like I’d had a rewarding adventure already by the time I first reached my goal after about two hours. But the game only truly began for me after I glided down from there to more thoroughly explore the rest of the islands.

A Short Hike is all about taking a break from the hustle and bustle of our daily lives, as a young bird named Claire decides to spend some days off in the peaceful Hawk Peak Provincial Park where her Aunt May works as a ranger. The park comprises a beautiful, secluded chain of small islands where you can jog, fish, climb, and fly to your heart’s content, far away from the city. So far away, in fact, that Claire can’t get any cell reception without climbing to the peak of the mountain, and there seems to be a very important call she’s waiting for. It’s up to you to get her to the highest spot in the park so that she can receive that phone call.

With the cliffs towering behind Aunt May’s cabin and the splashing waves not far down the shore, I began my journey as Claire along the dirt path that eventually leads to the rest of the islands. Fellow anthropomorphic tourists and park residents are scattered all over the area, all of whom are available to interact with. A struggling painter looking for inspiration, a shady teenager selling feathers, and a pair of best friends that make up the only members of their rock-climbing club are just a few of the characters you’ll encounter along the way. It’s up to you whether you want to keep moving or dig deeper into their stories, perhaps even going as far as connecting them with one another or helping them with their problems. 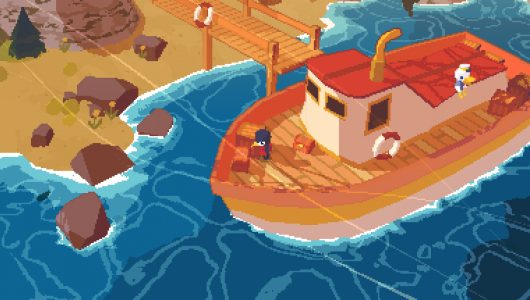 Presented in luscious overhead voxel graphics, the park comes alive with its vibrant colors and nature-inspired details. Nothing around you ever seems still, whether the slow-moving waters, the swaying trees and bushes, and even gusts of wind (stylized and uniquely visible, especially during flight!), to mention just a few of the ambient animations. The way the view is slightly hazy when observed from higher ground makes it feel even more thrilling when you leap from the edges of the cliffs and soar beyond the fog above the open seas.

What makes exploring the park even more immersive is how organic the sound design is. The music and background effects change with the environment wherever you go: when it rains, when you enter the forest, when you step into the snow at higher altitude. But it’s especially noticeable whenever Claire glides high in the sky. On the ground, the grass crunches with every step you take and you can hear the echo of birds chirping in the distance, but once you take flight, these organic sounds slowly fade away, and violins begin to emerge along with a percussive beat, creating an uplifting (no pun intended) anthem that motivates you to soar higher and farther around the islands.

As peaceful as it is just to roam around and search for any number of collectibles from coins to sticks to shells, the gameplay requires you to be a little dexterous from time to time. Physical activities produce varying degrees of challenges depending on the location. Getting Claire to jump over a rock is obviously easier than getting her to ascend to the top of a steep cliff, and since you can’t actually fly higher on your own, sometimes it requires a combination of running, jumping and gliding by holding a button on the controller or keyboard. It gets even trickier with changes in weather like blizzards that hinder you from drifting, or unique geographical features such as an updraft or a rushing river. From the beach to the woods to the snowy mountains, you’ll get to play around with how Claire moves from spot to spot. Running requires a pair of running shoes, and gliding can be done from any high ground, but one of the most important modes of transportation is probably climbing (there’s even a parkour race held by one of the NPCs!). 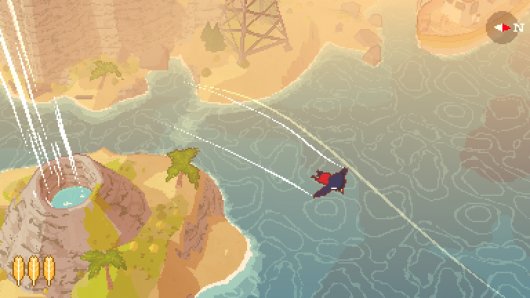 Everything you need to know to navigate through the park is learned as you go, sometimes with the help of an NPC. An inventory can be called up any time, from which all your items are available to be equipped one at a time, such as a shovel for digging up treasure in places where X literally marks the spot, a compass to display your directional heading, and a rod for catching fish. But there’s really no pressure to fuss over them because for the most part the gameplay focuses on clearing simple quests by talking to people and moving from location to location.

There are also certain characters engaged in lively activities throughout the islands: a sporty eagle that is always ready for a race to the lighthouse (and several other destinations, if you’re up to it), a fisherman that will buy your fish for some extra bait, or a group of kids running a marathon at the top of the hill. Some of these tasks involve a minigame that will reward you with achievements when you’ve managed to complete them all. These are of course non-mandatory, but trying my best to unlock the achievements sure provided me a lot of fun long after I had completed the main story.

To help you overcome natural obstacles, there are booster items called golden feathers that you can buy or collect along the way that serve to increase your physical abilities. These feathers can be used in various activities that require speed or stamina, such as running, double-jumping, climbing, and gliding. I think it’s safe to say that much of the game’s enjoyment actually revolves around this feature, because the more feathers you have – as displayed at the bottom of the screen – the longer and higher you can ascend and soar. This opens up new locations that you weren’t able to reach before because of your limited strength and capacity, and thus discover more secrets and encounter more characters and stories. To boost the fun, literally, there are also bouncy flowers growing all over the park that can be activated to launch you to new heights simply by stepping on one. 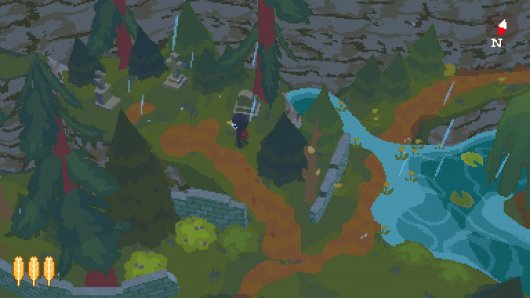 These power-ups come with their own limitations, however. You can run faster for example, by simply pressing down a button, but only until all of your feathers are used up, at which time your speed will revert back to normal. To recharge ‘tired’ feathers, you simply have to wait a few seconds and then you’ll be able to use the boosts again. It gets slightly more challenging in the snowy area, because depleted feathers will get frozen after being used. The only way to recharge them in this setting is by soaking in nearby hot pools and warming your feathers again.

Since making good use of your powered-up abilities is a lot of fun, the process of finding all of the golden feathers is where the heart of the game really lies. They are scattered all over the islands and some need a keen pair of eyes to spot, while others require the patience to accomplish certain quests given by the NPCs first, such as finding a lost wristwatch or beating a kid in the newly invented sport of beachstickball. The way these feathers are hidden actually provides a range of difficulty levels for players, which encourages exploration and curiosity to cover the rest of the islands. There are a total of 20 feathers you can collect throughout the islands, but it’s not necessary to obtain all of them to reach the top of the mountain, especially if you use the bouncy flowers as shortcuts.

The funny and often heartfelt encounters Claire will find throughout the park make your scavenger hunting all the more satisfying. All you’ll do is click through the dialogue and there is no voice acting, but the text is accompanied by a subtle warbling sound to simulate speech. Without spoiling any of the stories, conversing with the NPCs in A Short Hike almost feels like talking to real-life strangers or tourists when you’re away on a vacation. The light-hearted conversations can stick to mundane musings or sometimes evolve into sharing genuine problems and deep personal fears, all while sitting around a campfire or hanging out by the forest, depending on where you happen upon your fellow travelers. 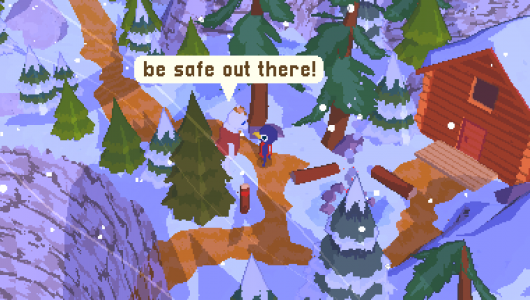 As its title suggests, A Short Hike is a rather brief experience if you limit yourself to your main objective, but there’s so much more to do besides that. Even after I’d climbed to the top of the mountain and made sure Claire received her phone call, and probably talked to all the characters in the park, I still hadn’t found all the hidden treasures, caught every rare fish, or won all those contests held by the local athlete. It gave me that feeling of a vacation coming to an end knowing there’s so much more I wish I could do. Thankfully, here you don’t have to go home as you are still able to wander around and finish whatever quests are left open, or simply to glide around the islands and enjoy the lovely view even after Claire’s story has ended.

With its beautiful environment to explore and its many hidden heartwarming stories, A Short Hike reminds us of the importance of taking a break and enjoying the great outdoors – at least its own little virtual version of it. It’s not a puzzle-centric experience or even a particularly challenging journey for the most part, but if you’re looking for a good time away from both the dreariness of city living and the hectic pace of daily life – or if you’ve always dreamed of flying or performing effortless parkour stunts for a few fun-filled hours – visiting the Hawk Peak Provincial Park might be just the diversion you need.

A Short Hike is available at:

The laid-back nature of the simple but fun exploratory gameplay coupled with the soothing music and lush scenery make A Short Hike a relaxing adventure filled with not only humor but the tenderness of personal connections.

GAME INFO A Short Hike is an adventure game by adamgryu released in 2019 for Linux, Mac, PC and Switch. It has a Stylized art style, presented in Realtime 3D and is played in a Third-Person perspective.