Explaining the grandeur of a trip to the movie theater is a tough thing to get across to the youngest generation. It’s possible, maybe even likely, that the Best Picture Oscar for 2019 will go to a movie that, just three weeks after its debut, can now be streamed into the comfort of your home, treating its inconsequential flyover on the silver screen as nothing but a slight inconvenience. This is a far cry from my childhood, when the sound and visual experience of theaters was always preferable to that of a standard definition small screen in your living room—but a generation before me, the theater wasn’t just the preferred option to see movies, it was the only option. Back then a trip to the cinema was as much a social event as it was a way to consume entertainment.

Indie Australian developer Atreyu Games pays loving tribute to the glory days of theaters past with The Cinema Rosa, a first-person 3D adventure that takes place within its classic namesake, an old-school movie house straight out of the Golden Age of Hollywood (a period generally understood to be anywhere from the late 1910s to the early 1960s). Unfortunately, in 2012 the Cinema Rosa is now abandoned, rundown, and perhaps haunted. The story begins outside of the recently-shuttered theater with very little context as to who you are or why you’re here, and solving these mysteries is the focus of the game’s brief running time.

The gameplay structure is based on Gone Home-style narrative exploration. A limited number of areas are open to you as you begin, and your actions slowly remove the obstacles allowing you to pass into others—generally through the old favorite mechanic of finding keys that are bizarrely misplaced on the other side of the building. As with most games of this subgenre, your primary diversion is reading the vast amount of text in the form of letters, brochures, emails, etc. that are distributed throughout the environment. Very slowly you’ll begin piecing together the history of your character as you come to understand what your relationship with the Cinema Rosa is, and what significant events and tragedies occurred there that shaped your life and romance. As you explore the badly deteriorated interiors, your actions also magically cause some of the more damaged areas such as the lobby and the projection booth to be entirely restored to their former glory. 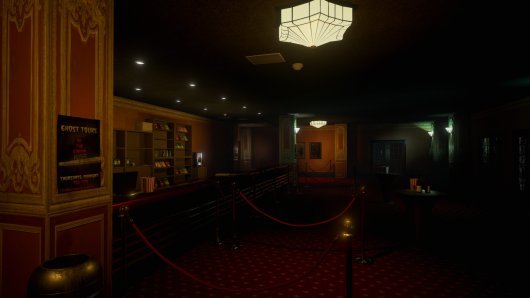 Without getting into specifics of what you’ll learn, there is a clear paranormal component to the story, with heavy reliance on imaginative dream sequences which then have an effect on the “real world.” These sequences are definitely the best and most compelling part of the experience. Designer Josh Krook has described the game as “spooky, but not horror” and he definitely succeeds at creating a tone that is unnerving at times through the use of very dim lighting, a pervasive sense of loneliness in this once-crowded expansive theater, and the occasional appearance by some supernatural elements. Supporting this musically is a very minimal and moody piano and string bed, appropriate for the atmosphere and similar to what you might expect to hear in a quiet moment of a movie from this era.

The eerie mood mixes well with the often morbidly serious tone of old-time Hollywood, which the game references constantly through the use of movie posters, décor and furnishings suitable to the period. This makes the occasional resorting to clumsily obvious jokes even more out of place. The writing on many of the documents you find, portraying the theater manager as a comically buffoonish scoundrel, and references to an insurance company called NeverPay (get it?) does the atmosphere a disservice with its attempts at broad humor and serves only to abruptly pull you out of the much more interesting ultra-serious tone of the rest of the game.

Mechanically, The Cinema Rosa is very typical in that navigation is handled through a standard WASD control scheme with a small ever-present crosshair in the center of the screen to highlight items for interaction. Inventory use is automatic and only the left mouse button is used to interact. The theater is a decent size and contains many initially locked doors, and remembering where you’ve been and what door that key you just found is likely to unlock is perhaps the biggest barrier to progress. The walking motion is a bit jerky, but the building itself is a really enjoyable setting to explore and the backtracking never gets frustrating. There are no manual saves (which the game goes out of its way to remind you when you quit) but there are hidden checkpoints about every 10% of the game. Unfortunately, you won’t know when you’ve passed one and therefore if you quit you’ll never know exactly how much progress you’re losing. The checkpoints aren’t specific to your activity, but it doesn’t really matter since there is only one linear path through the game. All the checkpoints become accessible once you’ve completed the game once. 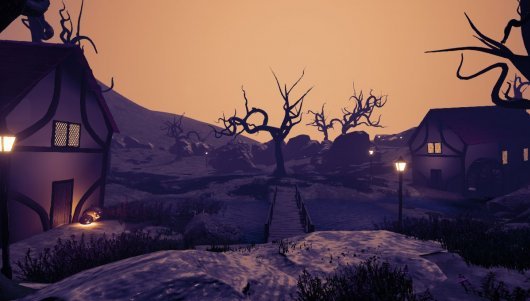 The quality of the visuals isn’t anything revolutionary, but for a one-man game I thought the attention to theater detail is well done; any movie lover will definitely appreciate the authentic Golden Age movie posters throughout. The most memorable parts of the game, however, are the often-brilliant dream (or memory) sequences. While the scenes in the theater are as historically faithful to cinema interiors as possible, these sequences take place in unrelated areas (accessed through portals or other similar paranormal features) and use color and imagination to play with the laws of physics to great effect, as well as sound and voice effects that can be flat-out scary. Consistent with their ethereal nature, though, you’ll finish many of these sequences being impressed but still not exactly sure what you just witnessed. The game is much more an atmospheric experience than a stirring narrative.

Other than exploration and the key-door matching, there are also a few puzzles scattered throughout, and while they are reasonably challenging, they also feel very tacked-on rather than naturally integrated into the plot. One example near the end involves assembling five short clips of an old black-and-white movie into the correct order. It’s not an unpleasant task; actually it’s a rather fun thing to do for film buffs, but it also doesn’t seem to have any context in the story other than a thing to do to prevent the game from being completely linear.

I certainly consider myself to be a movie lover and I hold great affection for old theaters, and that definitely contributed to my enjoyment of The Cinema Rosa. I played it through to completion in one 90-minute sitting, and while I hardly found it to be Oscar-worthy in its sense of narrative drama, uneven writing tone, and technical mechanics, it at least deserves a nomination for its great atmosphere, touching conclusion, and some genuine visual imagination in its dream sequences. Overall, it is an intriguing and worthwhile distraction for a short period of time—just like a good movie should be.

The Cinema Rosa is moody and atmospheric and succeeds admirably as a mix of retro-theater nostalgia and supernatural exploration. Its story is never delivered with clarity, but it’s a brief experience worth having, especially if you have any love for classic film.

What our readers think of The Cinema Rosa

Very short, no save? but fun enough

Although the game is very short (40min), I had fun playing this game. The narrative voice is very pleasant, the sounds, music and graphics are okay. The puzzles are not very hard to solve, but... Read the review »