“How will future generations remember us?” It’s an age-old question, and those who ask it almost never receive an answer in their lifetimes. In tumultuous times like the present, when technology advances further and faster every day and humanity becomes ever more aware of its own destructive impact on the planet, concerns about our relationship with the future and those who will inherit it are especially relevant—even urgent. Some Distant Memory is Galvanic Games’ attempt to reckon with those questions; it's a sometimes thought-provoking effort with an appealing cartoony aesthetic, but its attempt to tackle complex issues is ultimately hobbled by its short length, small scale, and lack of real gameplay substance.

Three hundred years from now the human race has all but died out, having fallen victim to a toxic, worldwide algal bloom that corrodes and kills whatever it touches. The few survivors live in sealed-off communities whose resources are rapidly dwindling; only explorers enter the blighted lands outside to search for answers and functioning tech among the remnants of the old world. Their ultimate goal is the fabled Sunken City, a now-empty metropolis that supposedly vanished below the surface before the Collapse.

Two such explorers are the player character, Professor Zay of Ares Colony, an interpreter for ARORA (the AI that’s shepherded humanity through the tumultuous centuries), and her guide and protector, Commander Ti of NOAH Colony. They’re on what’s meant to be a routine archaeological expedition when a sinkhole sends the Professor tumbling underground and into the remains of a pre-Collapse dwelling place. She’s thrilled, of course—they may have finally found the City!—but ARORA’s warning of an incoming storm on the surface means there’s not much time before the Commander will have to head for safety, with or without her. Zay resolves to explore the house as best she can while searching for a safe route back to the surface, with Ti keeping her company via satellite link. As she proceeds, however, she realizes that this one house may hold the keys to understanding the past that the colonies have been hoping to find. 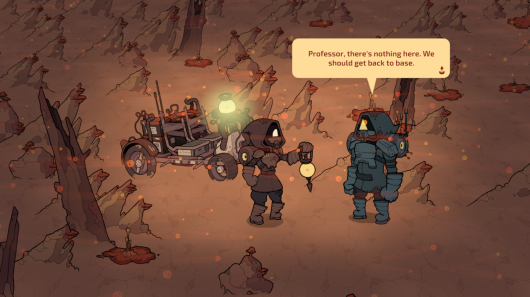 Some Distant Memory tells two stories that unfold alongside one another: the Professor’s own, as she tries to rejoin the Commander on the surface and share what she’s found with the other survivors, and that of the buried house’s original inhabitants, which you'll uncover as you go. Part of Zay’s job is to help ARORA learn and develop over time, and one of its newest abilities is that of reconstructing past events by analyzing data from a given location, which allows it to project holographic interpretations of what may have happened in the past. You must thus explore each room of the house as thoroughly as possible so that ARORA can show you what occurred there; when you’ve found all there is to discover in a room, you can watch the “memory” unfold before you as if you were there.

This is how you’ll come to know the Baron family: grandmother Ada, an avant-garde sculptor; grandfather Ernest, a retired executive; mother Emmy, a poet and screenwriter; and son Rikin, whose troubled birth led to severe, life-threatening asthma his entire life. The memories span decades, and scenes from their lives are presented in the order you discover them, not chronologically, so that you might find Rikin agonizing over an upcoming first date in one room and then see Emmy bring him home from the hospital in the next. This leads to some excellent uses of foreshadowing and dramatic irony. Particularly heartbreaking in this regard is one character’s abandonment of Rikin in his childhood, in which they cite a fear of growing too attached to a child who seems doomed to die young; the player already knows that Rikin survived to adulthood, and thus understands that this character’s rejection hung over him for years.

There are many items you’ll have to examine for ARORA to construct a new memory, ranging from notebooks and old photos to recovered text messages and dating site profiles. (You find the house without power; midway through you’ll figure out a way to turn it on, thus gaining access to electronic devices.) Each one sheds new light on the Baron family and the state of their pre-Collapse world. Ada used her sculptures to comment on the relationship between industry and environmental destruction, while Emmy’s sorrowful poetry reflects simultaneous longing for a lost love and for unspoiled nature. As Rikin grows, we see how his disability and his family history influenced his worldview, his chosen career, and his relationship with a woman named Mira, who becomes increasingly important to him (and, as more is revealed, to Zay and ARORA). 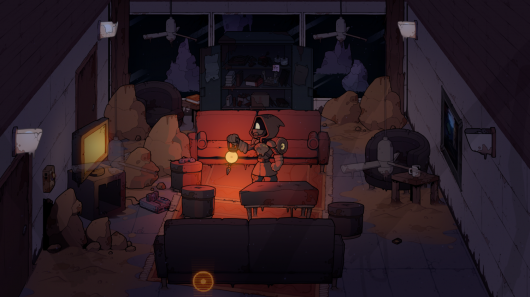 The hand-drawn cartoony art style could easily have detracted from the somber, reflective tone, but here it helps to show the wide gulf between the pre- and post-Collapse worlds. Zay and Ti wear Darth Vader-esque survival suits that hide their faces, and the harsh angles of their breathing masks draw a sharp contrast with the round, friendly features of the Baron family. The understated synth soundtrack also fits the mood nicely, emphasizing the mournfulness inherent to exploring a mausoleum that was once a family home.

It’s appropriate that a game about an archaeologist would focus on exploration and discovery, though there’s no "gameplay" per se beyond proceeding through the house and examining the artifacts needed to trigger a new memory. Occasionally an obstacle like a doorway-obstructing boulder will fall in your path, but the characters will immediately identify in dialogue what’s required to get past and where to look for it, while hotspots are automatically identified by a glowing border that appears when you approach them. All this works for a game whose objective is primarily to tell a story about uncovering the past, but it’s unlikely to satisfy anybody who doesn’t enjoy taking on the role of a mostly-passive observer.

As you might expect, the keyboard controls are simple: movement is handled with WASD, and a single key allows you to look at or interact with hotspots. Examining some objects like journals, photos, and tablets will result in a close-up view with several interactive nodes that you’ll have to click on to reveal the text or images they contain. Occasionally you’ll come upon something you need for an objective in another room, but there’s no inventory; your character will simply bring the item back out when the time comes. 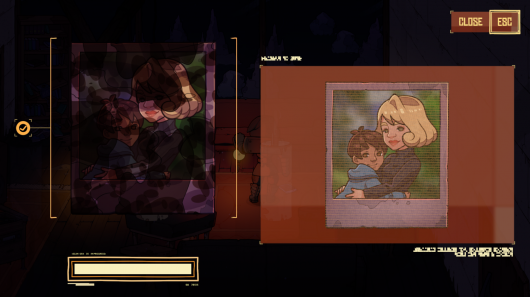 Such minimal gameplay means Some Distant Memory is comprised almost entirely of character interactions and insights, so fortunately it mostly succeeds at making its characters memorable. The numerous snapshots you’ll get of the Baron family at the various stages of their lives give you a good sense of who they were and of the relationships they shared, and as you uncover more memories you’ll come to understand how they developed over the years. Still, the most important relationship here is between the Professor and the Commander, who despite their physical separation remain in constant contact throughout.

The two have very distinct approaches to life: Zay is ultra-focused and dedicated to her job as ARORA’s interpreter, but regrets the sacrifices her position has forced her to make, while the more relaxed and artistically-inclined Ti tries to find levity where he can despite the loss of his wife and child. After each new discovery about the Barons, the pair will discuss what they’ve seen and what it means to them; their interpretations are often different, but the conversation leads them to understand each other better. As the storm got closer aboveground, I found myself earnestly hoping the two would have a chance to reunite and reflect on their experiences in person.

Unfortunately, there’s only so much one can do in a gameplay-lite experience that’s confined to a single locale, and Some Distant Memory's greatest shortcoming is reflected in its extremely short playtime. Had there been more to do or a larger area to explore, the game might have had enough space to better cover the philosophical ground introduced here, but the three hours we spend investigating the Baron house isn't nearly sufficient to effectively resolve the kind of complex questions being posed: What is the responsibility of one generation to its successors? How significant are a person’s deeds in a world defined by impermanence? How does our understanding of the past define our present and future? 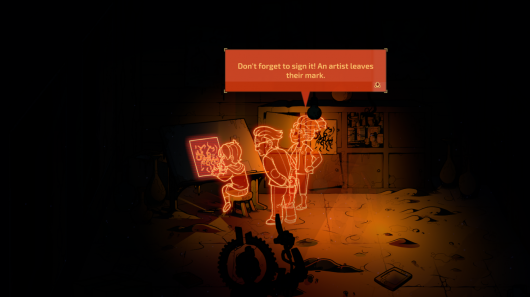 These are just a few of the quandaries the game asks us to consider, but despite placing them front and center it never seems very interested in using the time it has to (ironically) explore below the surface. It sets itself up as if it plans to delve deep into these issues and then instead focuses mostly on looking at society through an anthropological lens in order to argue that modern life is strange, complex and beautiful. While there’s nothing wrong with that kind of message in general, it feels unearned and out of place here. To pose a thorny question like "Does environmental destruction represent a failure to uphold our responsibility to future generations?" only to sidestep it by saying "Possibly, but humans sure are amazing and fascinating when you stop and think about it" feels not only simplistic but dishonest.

Voice acting might have helped mitigate this problem: the fact that we can’t hear the emotion in the characters’ voices as they discuss mortality, loss and the fate of the planet detracts from the dialogue’s impact. Rather than being made to feel what the characters did, I frequently felt that I was simply being told that I ought to. The mood is further undercut by the developers’ choice to sprinkle the script with humorously twisted versions of common phrases so as to demonstrate how speech patterns have changed over 300 years: “wild moose chase,” “glows my mind,” etc. This is amusing at first—especially when Commander Ti, sharing his knowledge of sports history, recalls a team named “the Goddamn Patriots”—but as the game goes on and new iterations of the joke continue to pop up, even in serious moments, it begins to seem obtrusive.

Some Distant Memory certainly does a number of things right: its characters, setting, visuals and soundtrack are well-designed and work effectively in concert. Still, its undeniable bright spots aren't enough to overlook the lack of real gameplay or the way it fails to engage seriously with many of the heady ethical and philosophical questions it raises. Ultimately it's an uneven experience made more frustrating by the fact that with more time and space in which to flesh its ideas out, it might well have been an unqualified success.

Some Distant Memory tackles serious topics—love, mortality, and environmental destruction chief among them—but its short playtime means it never has the chance to explore them in much depth, and its discovery-based play style may leave players wishing they had more to do.

What our readers think of Some Distant Memory