As a title, Alternate Jake Hunter: DAEDALUS – The Awakening of Golden Jazz is as perplexing as it is awkward, as the only aspect that features prominently in the game itself is the name Daedalus. This is the first game in the series that I’ve played, and while I understand that Jake Hunter is the lead character’s anglicized name in the previous installments, here he goes by his original Japanese moniker Jinguji Saburo. Daedalus covers a period of his childhood and early adulthood when the persistence and intelligence that will go on to make him a great detective are beginning to emerge. The story itself takes place in New York City where Saburo spends a summer and another later stretch investigating the death of his grandfather, Kyosuke, also a private investigator. While the narrative turns out to be richly rewarding, other aspects combine to produce an experience that is less than smooth.

This is a visual novel with several chapters and an elaborate, overarching plot, all reaching back into the past as our hero combs through his memories. In a short introduction that functions as a tutorial, you first encounter Saburo as a child in Manhattan, helping his grandfather find an item missing from his cluttered apartment. Another flashback takes young Jinguji to the camp he attended while visiting his grandfather. This is where Saburo originally meets three American friends: Ben, goofy and loveable; Abbie, observant and bossy; Leo (whose father happens to be mayor of New York City), competent and aloof. The youngsters together probe the mystery of a disappearing camp counsellor.

Several years later, after Kyosuke’s murder, Jinguji travels back to New York where he is greeted by his three comrades at the airport. They offer to once again join forces to help him discover what case his grandfather was investigating and what led to his mysterious death. It proves to be a compelling tale in which a past conspiracy with noxious implications has skulked its way into the city, and with Kyosuke now out of the picture the task falls on his bright but inexperienced grandson and friends. Saburo scours Kyosuke’s former haunts in Manhattan, as well as visiting a town called Silver Snow. He explores late-night bars, quaint restaurants, clue-strewn apartments, a tree-rimmed boardwalk, City Hall, and a police station, all in pursuit of information about a cunning killer. He talks to secretive camp counsellors, worried shopkeepers, wistful waitstaff, suspicious police, a beautiful but somewhat timid future fellow traveler, and many others. 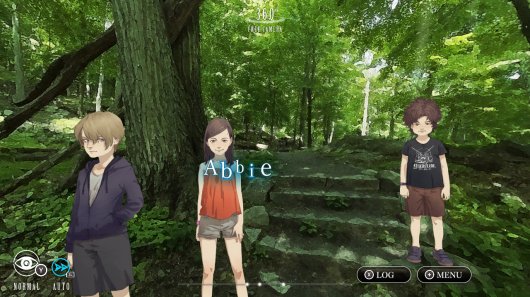 This is one of the most text-heavy games I’ve played, and I was looking forward to this aspect as it reverses a trend I’m seeing in current adventure games, an increasing number of which have no dialog at all. I enjoyed the intimate descriptions of Saburo’s friends and the development of their personalities; their involved, occasionally smile-inducing conversations; and the brief philosophizing that makes the game unusual. Certain exchanges require picking a “stance” (a particular attitude toward the person you’re addressing), and the choice will influence the response you receive. Voices are in Japanese with English subtitles. Normally I don’t mind voice-overs in different languages, but it did cause me to constantly reorient myself when expecting to hear English spoken by Americans living in America (just goes to show how parochial I am).

The chief downside to all this talking is that it can trigger a ton of repetition. Clicking on the various characters reintroduces old topics because it’s often impossible to know when someone has something new to add. But even more frustrating, every time you reenter a scene you hear the same description of it over and over again. At least you can click through the lines to speed things up somewhat or choose a function that progresses them automatically. There’s a log of conversations easily accessed anytime should you want to refresh your memory later.

Graphics give a good sense of the city, with a watercolor effect adding a lovely patina to the photographic scenery, while character models are cartoon-like and lightly manga-influenced. Some depictions don’t always jive with reality, however, such as a mother who looks younger than her adult son. You often hear horns honking and traffic noise as you make your way about the detailed urban settings. Background music features piano and orchestra and even some lively jazz, but these interludes are unusually short and soon become annoyingly repetitive as well. 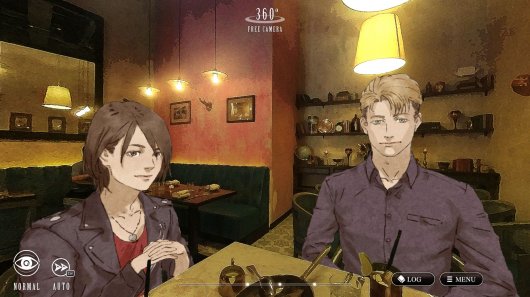 Character animation for mouth and sometimes arm movement is disappointing, as often the resulting expressions or positions are stiff and zombie-like. There are even times when a lack of animation or change in appearance is so unsuitable that it pulled me right out of the story. For instance, after being fiercely assaulted by an armed maniac, a person shouldn’t look exactly as he did prior to the attack but rather sport some evidence of a wound, a difference in posture, or at least a rumpled collar. Similarly, when a villain is right in front of you and threatening to shoot you, there ought to be a gun pointed at you. (DAEDALUS contains intense, violent situations and also occasional language that makes it inappropriate for young children.)

I played the PC version, in which you use the WASD keys or click and drag the mouse for 360-degree camera panning. While exploring, you don’t walk through a series of adjoining locales. Instead, a map reveals sites to click on, bringing up single-screen environments. The optional feature to help you find hotspots darkens the screen and shows white flakes that, when the cursor is in the right position, become a question mark-shaped hotspot. Once in a close-up screen such as a bookshelf, shop counter or a desktop, however, this function does not tell you if you have found every item. Special note for Steam players: the game initially presents itself in a window and you must press alt-enter to enlarge it to full-screen.

With one major exception, gameplay challenges are simple, as befits an adventure focused on an intricate narrative. Talking to characters and examining environments by clicking on hotspots usually advances the plot nicely, though it is certainly possible to get stuck by missing an object in a close-up or not realizing that a person you’ve spoken to already suddenly has more to say. I spent way too much time in the summer camp chapter, for example, searching for people who were moving about. A few times a character told me where to look for someone among the ten possible locations, but the information wasn’t always accurate. Since each scene triggers a pause while the screen loads, then another halt while the description of the location is narrated, and another hiatus before the leave-the-screen icon is available, this becomes more than a trifle aggravating. 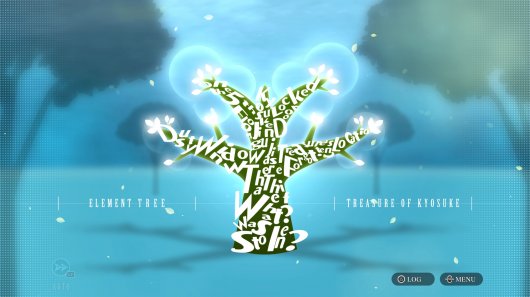 The most challenging and intriguing gameplay comes near the end of each sequence, when DAEDALUS presents a quiz-like dialog puzzle (officially the Truth of Incident – Elucidation Phase). Here you must link facts or events with conclusions and implications. You are aided prior to the quiz by a device called an Element Tree, where important information grows atop simulated branches as the chapter progresses. Wrong answers will often force you to repeat quiz sequences and late in the game may even affect the ending.

After 14 hours of investigation and discovery (about a third of which was taken up by repeating dialogs and descriptions), I discovered who the ultimate villain was, but I still have no idea as to the criminal’s true motive. It’s possible that different answers in the Elucidation Phase would have given me that information, but as far as I could tell the only way to test this hypothesis would be to replay the entire chapter, and I wasn’t sufficiently motivated to attempt it.

I suspect that I would have enjoyed this game more if I hadn’t happened to live for several years in New York City. I’ve found that when games are set in your old stomping grounds, it’s hard not to be persnickety about minor mistakes—the street names that don’t match a real map, City Hall misidentified, describing a river as an ocean, and the impression that New Yorkers chat happily together in Central Park while knife-wielding, baseball-bat-toting thugs saunter by. Yet despite some discrepancies and plenty of repetition, from the very start I was caught up in the enigmas and was rooting for the characters. Fans of the of the franchise will certainly want to play Alternate Jake Hunter: DAEDALUS – The Awakening of Golden Jazz to see what Jake was like before he rocketed to fame. But there are enough drawbacks to this prequel that newbies should probably get their feet wet with a more established game in the series prior to sampling this entry.

Alternate Jake Hunter: DAEDALUS – The Awakening of Golden Jazz is a visual novel-adventure aimed at gamers who delight in plot twists and dialogs and are willing to overlook repetition and graphical discrepancies.

GAME INFO Alternate Jake Hunter: DAEDALUS – The Awakening of Golden Jazz is an adventure game by Neilo Inc. released in 2019 for PC, PlayStation 4 and Switch. It has a Stylized art style, presented in Panoramic nodes and is played in a First-Person perspective.

What our readers think of Alternate Jake Hunter: DAEDALUS – The Awakening of Golden Jazz