I’m a sucker for traditional hand-drawn 2D animation. It’s becoming increasingly rare these days due to how time-consuming it is to produce, but seeing it always makes me feel comfortably nostalgic for the classic cartoons I grew up watching. So I was excited to play LUNA: The Shadow Dust, the successfully crowdfunded debut by a small team promising to pair charming visuals with adventure game puzzling goodness. And indeed I was thoroughly impressed by a gorgeous aesthetic that could rival many animated films, though the game's linear procession of puzzle sequences is a bit too shallow to warrant the same kind of enthusiasm.

LUNA was inspired by an animated short that artist Beidi Guo made at university. According to her, the aim of this game was to expand on the world established in the film and blend it with the kind of gameplay the team enjoyed playing. The end result is an adventure bursting with creative vision: its art is warm and inviting, while the music will enchant and transport you. That said, the further I progressed, the more I realised that there wasn’t much more to the experience than the same basic formula established early on.

That’s not to discount the actual gameplay entirely. I did enjoy my time with LUNA and there are some fun puzzles to solve along the way, but it doesn’t do anything incredibly noteworthy (other games have done similar things better) and one’s overall appreciation is undoubtedly elevated by the rich sensory experience. I wanted to enjoy it more fully, but I felt underwhelmed. It was like being served a delicious-looking meal that is every bit as good on the first bite, but peaks too soon with diminishing returns. 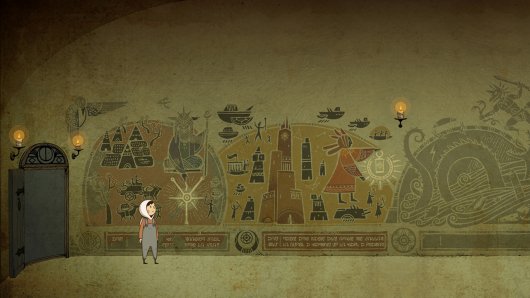 You take control of a young boy with rosy cheeks, white bunny hat and dungarees, whom we first see falling from the sky, only to be saved by a spirit. It’s an enticing fantasy opening that instantly raises many questions. Once safely on the ground, the child sees pieces of a tower assembled right before his eyes and he makes it his task to enter and climb to the top. We’re probably to assume this is where he came from, but this is a wordless experience so any understanding of the world is derived mostly through cutscenes.

Not that you’ll ever really understand very much. The snippets of story conveyed through the nicely animated cinematics are cryptically told, hindered by the lack of dialogue. They do a good job of building atmosphere, but not much more in terms of providing necessary context. There’s a meaty cutscene when you finish the game, which I admired for its artistry but by then I felt disengaged because I wasn’t clear on what the story really was. Certain narrative strands can be pieced together, but it’s mostly guesswork and you have to infer too much. There were many details I wanted to know more about that are never delved into. There’s something to be said for leaving things open to interpretation, but it’s not a good sign when the art book available as DLC has far more plot specifics than the actual game.

Thankfully the gameplay is far easier to grasp. The newly (re)formed tower is made up of many rooms, each constituting a discrete level of its own. As you complete each one, the boy climbs nearer to the top. The ultimate objective of each scene is simply to move to the next room. You can see the door you need to go through right away, but it’s locked or blocked, and you need to figure out how to advance further by solving the self-contained puzzles within. 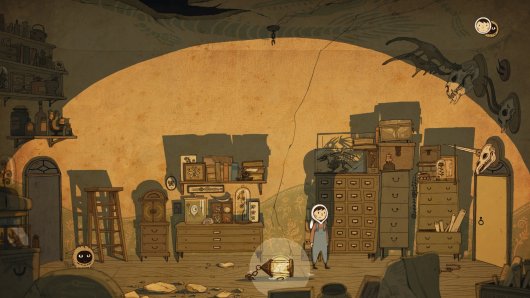 A single mouse-click is used to walk and interact, with no inventory or any other traditional adventure game mechanics involved. As such, you must work out how to progress by studying the immediate environment. For example, one of the first rooms requires you to switch lights to see colours above a door and adjust surrounding objects to match. Soon after, you must pay attention to pictures on the wall to know which direction to travel. LUNA is at its best in these beginning stages, when many of the rooms are literally single screens and everything still feels fresh. It’s simple, but the tighter focus works better than when it loosens somewhat later on. The game really soars when showcasing its tremendous artistry and linking it closely to the puzzles.

You soon encounter a cute little animal – best described as a circular cat – and you can then switch control between the boy and the critter. Of course, the creature is more than a companion: it’s a puzzle-solving teammate that can leap onto ledges the boy can’t, for instance. Its best trait is the ability, at specific points, to become a shadow on the wall. One of the coolest and cleverest moments is when you light a lantern on the floor, casting huge shadows onto the wall that the creature can then use to access a previously inaccessible area. This strategy is used multiple times and LUNA does a good job of introducing new elements like this and weaving them together.

I liked most of the challenges, though some are more successful than others. Taken out of context, many are not very special in terms of their actual mechanics and solutions, but it’s the presentation that elevates them, like when you jump into a giant stained glass window or rewind time. Although you might be using similar techniques throughout, like matching symbols or pulling levers, the stylish design helps keep things interesting. One standout is when you enter a magical doorway and find yourself in a sparse exterior environment with the ability to switch between the four seasons, using the boy and animal separately to alter the world’s state. 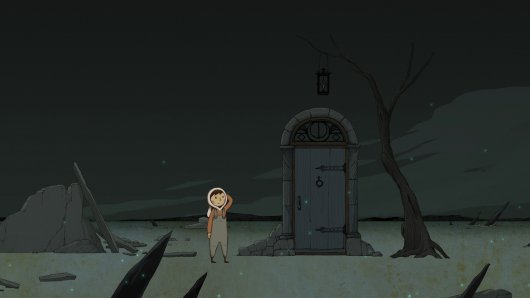 There are more good puzzles than bad, but there are some missteps. Flying around in a boat adjusting symbols during another brief detour away from the tower feels random. Repeating the same steps four times in a library is redundant. The large final puzzle is the worst offender; I got stuck on it for ages because it’s far less logical than what has come before it and fails to effectively signpost what you should be doing. Compounding matters, the reaction-based climbing scene that follows is banal and sadly ends the game with a whimper instead of a bang.

Inexplicably given the lack of complexity, the mechanics aren’t as refined as they should be. The walk cycles are too slow, especially for the creature, which becomes tedious when the areas get larger. There are times when you must move boxes, which requires you to click to move to the side of the box you want to push, wait for the boy to go there, click the box, then click again to push. You can’t even pair the boy and animal up, which is especially tiresome when you complete a stage and must then wait for both to independently go through the door.

But having dissected its weaknesses, let’s return to LUNA’s bread and butter: this game looks and sounds delightful. The first time you step into the tower, you’ll see some faded wall murals. Stand in front of them and they slowly come to life with colour emerging and the sound of stone cracking, like the very structure is responding to your energy. The rooms you start in feel pleasingly antiquated, with old grandfather clocks and fireplaces set against earth-toned walls. It’s like you’re exploring the house of some aged professor, especially in the study lined with cabinets, papers and specimens. These scenes are enhanced with light touches like the rising steam on a kettle and the flicker of a candle that lend a homey touch. 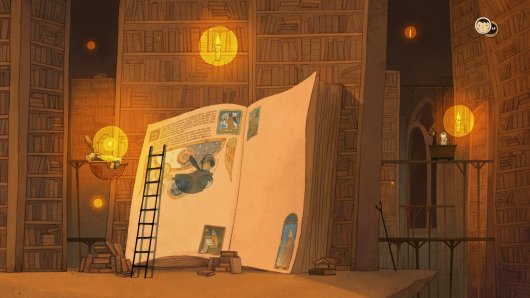 As the boy and his spherical pal ascend the tower, the scope of these rooms expands and becomes more surreal. For a brief period you even find yourself in space. This may sound good, but it’s a rare artistic misfire as, twinkly backdrop aside, there’s not much visually appealing about the floating rocks you move between. Fortunately things improve again when back on the ground. I especially loved a room comprised of three huge stained glass windows, with light beaming through them as an angelic choir sings in the background. A later scene where the boy is walking across a floating bridge of books with music soaring and glowing symbols gliding by is equally impressive.

The character animation is basic but effective. The child appropriately interacts with levers, doors, and so on, and the way the creature bounces between ledges is cute. I do wish they both emoted more, though, since their often blank expressions are at odds with the wonders happening around them. Their emotions are more vividly portrayed in the cutscenes, though these are largely constructed from semi-static shots, such as one with the boy’s hat and hair flapping in the wind. I would have liked to see more fluid cinematics, but they’re nice nonetheless. 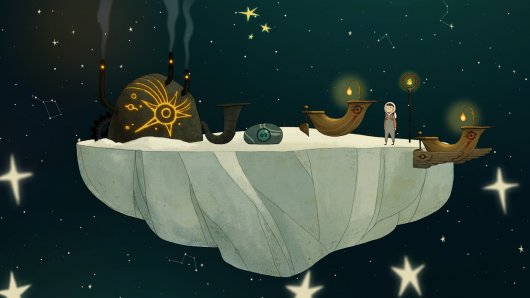 The soundtrack composed by Wang Qian is at times melancholic and pondering, and other times uplifting and urgent. It glides between ethereal harps and Middle Eastern drums with delicate ease. It’s something I enjoy listening to even outside of the game, but in-game the score complements LUNA perfectly, evoking a sense of mystery and longing as you explore the abandoned tower. There’s a recurring theme that crops up in many of the pieces that helps unite the game experience in a satisfying way. The ambient audio is similarly flawless throughout, down to the smaller details like the patter of feet and subtle notes to signify you’re on the right track.

It should take you around three hours to reach the top of the tower, with little to tempt you back for a return visit (apart from perhaps a certain section you can miss the first time). In fact, I’m not sure the experience really benefits much from being a game in the first place. The art and music are undoubtedly wonderful, but strip those away and there’s nothing too memorable beneath. There’s a definite charm to the simplicity of  the first half, and the puzzles are attractively brought to life, but I was never hooked by either the vaguely teased story or gameplay later on. I do recommend LUNA: The Shadow Dust if you like the look of it, but enter with the knowledge that it’s a feast more for the eyes and ears than the mind.

LUNA: The Shadow Dust is an audio-visual delight, with charming hand-drawn animation accompanied by a stellar soundtrack, though its gameplay isn’t very inventive and is ultimately more a case of style over substance.

GAME INFO LUNA: The Shadow Dust is an adventure game by Lantern Studio released in 2020 for Android, iPad, iPhone, Linux, Mac, PC and Switch. It has a Stylized art style, presented in 2D or 2.5D and is played in a Third-Person perspective. You can download LUNA: The Shadow Dust from: We get a small commission from any game you buy through these links.
The Good:
The Bad:
The Good:
The Bad:

What our readers think of LUNA: The Shadow Dust