It may feel like a million years ago that Kentucky Route Zero first ambled out of the ether, though it was really only 2013 when Act I debuted. But time moves slowly in the Zero and for the sleepy rural American South it calls home. The real world has seen dramatic changes in the interim, but the only world Conway, Shannon, and the others know has been gradually, quietly dying for decades. Not dead, mind you: just as Cardboard Computer has slowly but surely dripped out the preceding fours Acts and playable interludes, the denizens of the Zero have continued to eke out a living by steadily and silently working at their odd jobs or, if they’re lucky, their callings.

We’ve been following truck driver Conway and his growing entourage as they seek to make a delivery to 5 Dogwood Drive, an address that has haunted and eluded them on their serpentine journey through the underground highway. In his travels, the enigmatic protagonist has met and been joined by all sorts of wayward souls: Shannon, a TV repairwoman; Ezra, a homeless eight year-old; musicians Junebug, Johnny, and Clara; and of course, an old dog in a straw hat.

[Spoiler alert for Act IV] Act IV saw the group travel the Echo, a subterraneous river, by ferry, stopping at various points to encounter new (and usually sad) folks and chat them up. Along the way, Conway, increasingly consumed by debt and falling back into his alcohol addiction, finally and fatefully made the full transformation into one of the anonymous glowing skeletons that had been following him since his leg operation in Act II. Boarding a dinghy crewed by skeletons, Conway disappeared to "settle up" his debts, leaving his truck in Shannon’s hands. Shannon and the others ended up at the bottom of a well, however, with no choice but to climb the stairs leading to the surface carrying the contents of Conway’s truck by hand in order to finally see the delivery to its destination. [End spoiler] 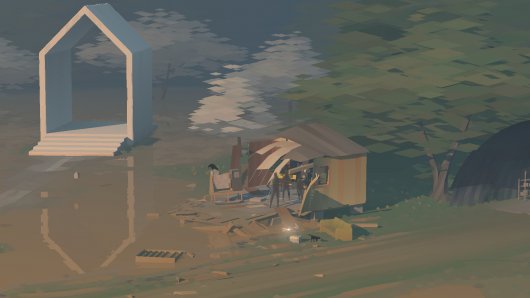 In the last interlude, we sat with the employees and guests of WEVP, a local television station, as they powered through their eight-thousandth-and-change broadcast despite failing equipment and an oncoming flood of biblical proportions. Now, finally, seven years after it all began, we arrive, sans Conway and his truck, at 5 Dogwood Drive, in the very same town where WEVP broadcast through the storm.

If you are expecting a typical narrative resolution to Kentucky Route Zero here, one that “pays off” plot lines that have been set up and hinted at over the series…well, you’ve been playing the wrong game, and you will be disappointed. Act V is short – perhaps an hour at most – and quiet, even by KRZ’s standards. On its own, there’s not a whole lot to it: you control a nameless cat wandering around town, listening in on various conversations over the course of a single day. But as a finale to the whole experience, this is a gorgeous, lyrical, sad, yet hopeful send-off to one of gaming’s strangest and most resonant stories.

If you need more detail, continue on, but I recommend going in more or less blind since, as with all of KRZ, this Act hinges on observation and personal interpretation. The area has survived the flood from the prior interlude, but just barely. The residents are picking up the pieces and assessing the damage as Shannon and company emerge from the well with the pieces of the delivery. The town, or what’s left of it, is laid out in a ring around the well, which is itself set inside a burial mound left by the native inhabitants of the region. 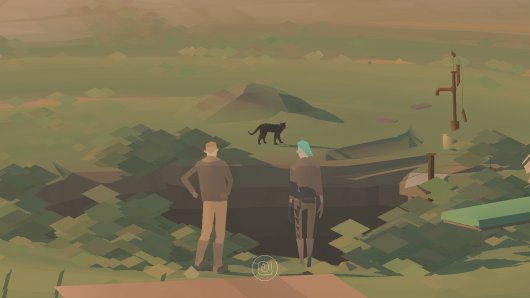 Act V consists almost entirely of running around this ring as a cat, coming across snippets of conversations and “memory” vignettes that flash back to past events. Shannon and the others mingle with the few remaining townsfolk as they wrestle with the aftermath of the flood and decide whether the place is worth trying to salvage or if moving on is the better option. As you (the cat) circle around the environment, characters move about and new conversations and memories appear.

You take in these scenes while the sun slowly goes down – and that’s pretty much it. But it’s all so poignant as these vignettes put a cap on the tales of the various folks we’ve come to know, and some we’re only now meeting, in signature KRZ style: with quiet, sharply-observed stories, solemn stares, and heartfelt song. There are few great life-changing realizations, no dramatic reveals or betrayals, no real plot twists. Instead, our crew, each of whom has been looking for some kind of purpose or home, finds small hopes and joys – repairing a busted-up prop engine plane, reminiscing about long-gone days, telling new friends anecdotes about old friends who’ve passed on, or just petting a cat – that give them a reason to keep trudging on. There is one exception to these welcome closures, and the character’s total absence from this episode is both clearly intentional and utterly gutting.

Kentucky Route Zero has always been a stunning looking game, with its almost papercraft aesthetic of low-poly solid shapes, moody palette, and cinematic camera movements. This installment is no different. The entire Act plays out without cuts as the camera swoops around in a circle to follow the feline, smoothly zooming in or dipping away to focus on this or that conversation, all while things subtly, almost imperceptibly shift in the background. The lighting dims, ghostly figures phase in and out of view, floodwaters recede. Character animations are expressive and fluid, and the environment is full of tiny little details that delight, like the shadows of tree branches swaying gently in the wind and birds swooping gracefully overhead. The soundscape, too, remains minimalist but deeply immersive, and what little music is present is subtle and beautiful, including a single, piercingly emotional vocal track. 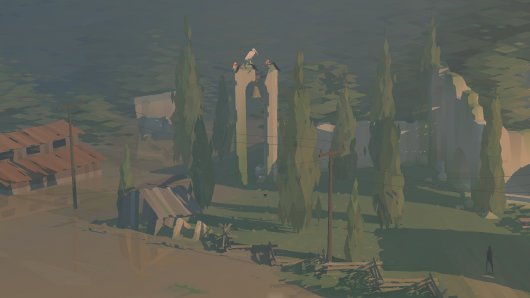 Judged by classic review metrics, the entirety of Kentucky Route Zero would score low in the “gameplay” category, and this Act least of all. There are no puzzles, only one location without much even to explore, and the branching dialogue paths have little effect on anything. Maybe that matters to you. It doesn’t to me, and it doesn’t to KRZ. As an interactive experience melding video games, theater, film, music, and literature, it stands as a shining example of what this medium can be.

Act V beautifully encapsulates the themes the series has been exploring in its own idiosyncratic way over seven years: the abandonment of rural America by industry, the struggle to find and maintain purpose in a world that doesn’t care, the importance of community and artistic endeavors in that struggle, and – perhaps most of all – the obvious but often forgotten fact that there are no NPCs in life, no extras, no bit parts. Everyone – every single person you pass by daily, as well as every single person you don’t – has a fully fleshed-out life story full of tragedy, comedy, and everything in between.

While some of Kentucky Route Zero’s individual chapters have felt slight or less than fully satisfying on their own, taken as a whole it is clear that this is a remarkable work of singular vision. Those seeking a traditional gameplay or even narrative experience should steer clear, but if you understand what you’re getting into, you’ll find an interactive adventure that tells one of the most heartbreakingly human stories I’ve encountered in a game, and it does so with unparalleled style and beauty. Whether you’ve been waiting for the finale with bated breath since Act IV or holding off until the complete game became available to start from the beginning, you can rest assured that it is worth the wait.

GAME INFO Kentucky Route Zero: Act V is an adventure game by Cardboard Computer released in 2020 for Linux, Mac, PC, PlayStation 4, Switch and Xbox One. It has a Stylized art style, presented in 2D or 2.5D and is played in a Third-Person perspective. You can download Kentucky Route Zero: Act V from: We get a small commission from any game you buy through these links.
The Good:
The Bad:
The Good:
The Bad:

What our readers think of Kentucky Route Zero: Act V

I bought all five episodes for the Switch and immediately regretted it. This is essentially a text adventure with some nice atmospheric graphics. It starts off with a potentially compelling story but turns surreal and... Read the review »