The Artifact is short. Very, very short. Despite this – or perhaps because of it – the developers at Enigma Games have managed to incorporate some intriguing gameplay mechanics within its point-and-click-and-drag structure. Set on an abandoned starship, the game avoids the cliché of something disastrous having gone wrong with a lone survivor left to set things right. Instead, the experience is much more evocative of 2001: A Space Odyssey – except, of course, the length.

The initial presentation led me to believe The Artifact would be played in a similar fashion to other real-time 3D first-person games. I expected to freely maneuver through the environment using the keyboard and mouse or perhaps a gamepad, especially as the game launcher provides the typical Unity control mapping tab. Instead, the game plays more like such titles as The Journeyman Project 3 and Myst 4, relying solely on the mouse. Holding the left mouse button down and dragging will cause the view to rotate in place. Left-clicking will cause your unseen avatar to move from one predetermined point to another.

The manner of navigation makes sense given that the game is fundamentally a point-and-clicker. Frequently you will move into a close-up of some piece of equipment in the environment that you have to directly interact with. In some cases this will be as simple as clicking buttons on the machinery. In other instances you will have to click and drag to perform actions like turning handles or moving sliders. This direct manipulation is quite engaging and made me feel more like I was there interacting with things rather than translating my intent through a video game interface. For all of that, I did still find the node-based movement to be occasionally cumbersome, as my brain and muscle memory wanted to keep freely maneuvering through the environment when I couldn’t. 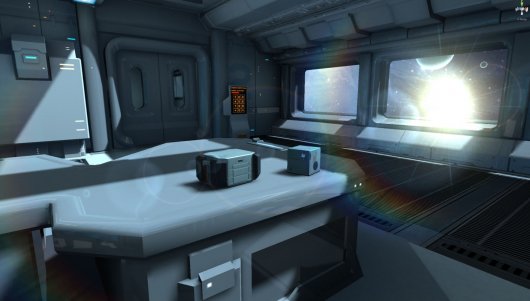 The Artifact also provides your avatar with Augmented Reality optical implants, which can be turned on and off by clicking an eye icon in the top right corner. When switched on, the implants will give you a sort of infrared vision within a circle centered on the screen. As you turn to look at different parts of the environment, this may reveal details that can’t be seen with normal eyes, such as fingerprints on the buttons of a number pad used to unlock a door. This is used to clever effect in a couple of puzzles.

Obstacles include several access code-gathering puzzles, some pattern matching, and a bit of object collection. Inventory items are displayed on the screen and can be used by dragging them and dropping them on appropriate interactive areas, always very near to where they’re found. None of the puzzles are at all difficult. The only thing that slowed me down even briefly was when I overlooked one particular navigation node that had an important interactive point early on. The ease of the game means that progress is very rapid and that many of the challenges are almost instantly forgotten.

The Artifact begins with your unseen avatar being awoken from suspended animation on board the U.S.S. Intrepid. It quickly becomes apparent that the ship is deserted, but there’s no indication of where the rest of the crew went. The mystery, however, seems to be tied in with a frigid block of alien material that was brought on board – a block that is more than a little evocative of the monolith in Stanley Kubrick’s seminal sci-fi classic. 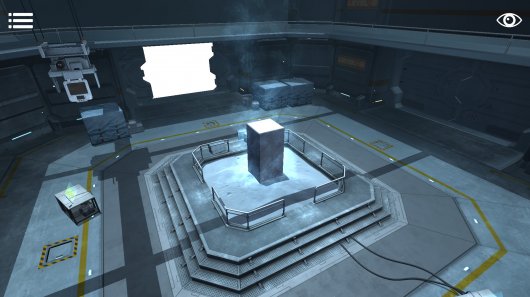 Unlike most similarly abandoned space ship/station games, which plunge players into dark environments wracked with technical malfunctions, here the starship is brightly lit with lots of gleaming surfaces. While many of these surfaces sport a variety of objects such as computer displays, storage bins and bits of sci-fi equipment, interactive areas are usually easily discernible as they’ve been modelled and textured to a higher degree than strictly background objects. This increased detailing walks the fine line of drawing attention to these areas without seeming jarringly out of place.

Audio-wise, the game has what one would expect from a story set predominantly on a starship. Computer controls beep and boop, metal panels shwink open and closed, and the AR eye has an eerie wavering sound accompanying the slight visual distortions it causes. Music fits in nicely in the background, being best described as dreamy instrumentals that contribute to laid-back, tension-free exploration. This relative serenity isn’t even broken by your avatar, as there are no voices to be heard. Occasionally comments are displayed in text along the bottom of the screen when viewing some interactive areas such as a holographic projection of the Intrepid showing all systems are working fine.

As you progress through the four chapters of The Artifact and unlock the secrets of the obelisk, you will leave the ship and find yourself in a desert valley on an alien planet. There canvas tents have been erected and contain some equipment from the ship, and sand blows in the wind surrounding the camp. The overall feeling is that of an Egyptian archeological dig site, which makes for a nice change of pace from the more sterile confines of the starship. 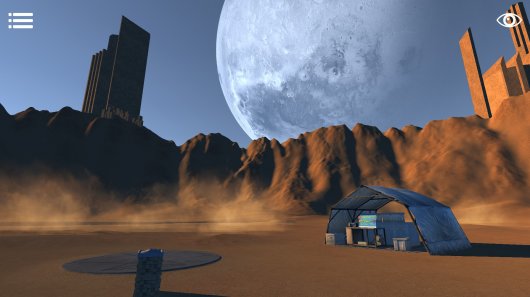 I can’t say much more about the story, not for fear of spoilers but because there’s simply not that much to say. The basic premise of trying to track down the missing crew is the driving force for the first three chapters. Those sections combined feel like a prologue to a much larger story. Unfortunately that is not meant to be as the fourth chapter ends the game in an enigmatic 2001 sort of way (except no star child). You’ll know for yourself if that’s the type of ending you can appreciate in a story. For myself, I would’ve preferred a longer narrative with more meat on the bone. All told, this is an experience that will take under an hour to complete even if you go at a rather leisurely pace.

There is no ability to manually save anywhere, instead relying on a single autosave as progress is made. Given the brevity of the play time, of course, this isn’t the drawback that it would be in a longer game. As a nice touch, the main menu provides quick access buttons to each chapter as they are unlocked throughout. A not-so-nice touch is that you’ll find no quit button anywhere, requiring you to either run the game in a window or else use some manner of forced exit to quit.

The Artifact is an enjoyable enough experience while it lasts, but it lasts for far too short a time. Some interesting mechanics are incorporated, but the puzzles are never complex or challenging enough to really take advantage of the ideas. And while the story has an intriguing premise, it lacks the opportunity to develop it in sufficient enough detail to be memorable. If this were a demo for a longer game, it would be quite a tantalizing taster. As a meal in its own right, it will likely leave players hungry again half an hour later.

Too short for its own good, The Artifact has some fun and interesting game mechanics but the experience is over before it can leave a lasting impression.

GAME INFO The Artifact is an adventure game by Enigma Games released in 2017 for PC. It has a Illustrated realism style, presented in Realtime 3D and is played in a First-Person perspective. You can download The Artifact from: We get a small commission from any game you buy through these links.
The Good:
The Bad:
The Good:
The Bad:

What our readers think of The Artifact

All over in under 20 minutes. Features 4 chapters, essentially 4 puzzles and you're done. Apart from the short game play, only the slightly clunky controls can be faulted. Had to use ESC and resume... Read the review »