Old Man’s Journey, by indie developer Broken Rules, is a difficult title to categorize, asking players to assist an elderly man in his travels across land, air, and sea to reach his long-lost love. One part puzzler-lite, three parts thought-provoking introspective experience, it doesn’t contain enough exploration or narrative development to fit neatly into the mold of classic adventure games. The focus here is a lot less on the gameplay mechanics involved in helping him reach his destination than on the journey itself, in particular the moments when he takes the time to reflect on the milestones of his life.

With its  relative lack of gameplay, the lion’s share of emotional investment in the old man’s journey falls to the game’s presentation to evoke. The graphics consist of colorful hand-painted backgrounds and characters, depicting a stylized, sometimes minimalist rural countryside, with vestiges of small-town civilization appearing here and there. Rolling hills and fields as far as the eye can see, mountainside meadows, forest glades, and wide open skies are interrupted by bumpy country roads, multicolored villages, stretches of railroad tracks, lighthouses, and seaside piers. This pilgrimage is designed to be a peaceful and soft experience.

The soundtrack is equally important for setting the game’s stage. Simple, melodious tunes serve as the background score, reminiscent of traditional folk songs adapted to a wind-up music box style. In the absence of any voiced dialog, the music, along with effects like an occasional sigh or grunt from the old man and the sounds of nature and objects in the environment, is all you have to help you empathize with the protagonist’s situation. There are times when the audio can be downright lovely and establishes an emotional mood; other times, I found myself slightly put off by its simplistic repetitiveness. However, it does manage to achieve an important feat, which is to underscore the journey without ever overpowering it. 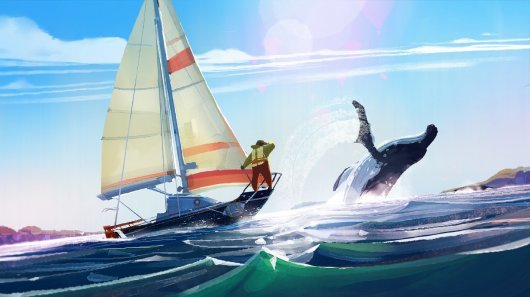 About 95% of player interaction revolves around the idea of getting the old man from point A to point B, generally by clicking to make him walk from left to right across the screen. This usually involves transitioning between the multiple layers of fore- and backgrounds, since a direct path is often not available. The gameworld logic of Old Man’s Journey prevents you from moving from one plane to another – jumping from a foreground hill to a middle-foreground hill, for example – unless the two planes meet at a juncture somewhere. It is only at these intersections, such as when the arc of one hill terminates in the apex of another, that the old man can transition between them. Using the mouse, you can drag parts of the environment up and down to create and alter these junction points at will, effectively constructing a bridge for the man to traverse.

With very few exceptions that don’t occur until near the game’s end, this comprises the puzzle-solving, simplistic as it is. Building on this concept near the end are a few situations in which slopes in the environment must be manipulated to propel round stationary objects into motion, causing them to crash through barriers that otherwise block the path. There is also a stretch of the voyage that takes place on a train that requires players to drag pieces of the tracks into place so the vehicle can proceed smoothly on its course.

I suppose this type of gameplay could technically qualify Old Man’s Journey as a lite puzzler, but there is nothing mentally challenging about any of it, apart from first discovering the ability to manipulate the environment. Really it seems to have been included simply to give the player something – anything – to do while participating in the game’s true aim: piecing together the old man’s life as told through intermittent flashbacks along the way. 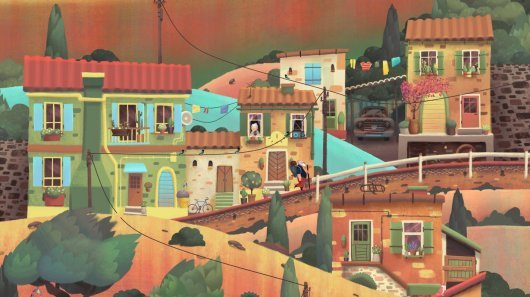 Whenever the protagonist's path takes him past a bench, he will automatically set down his pack and bundle, and rest for a spell. Not only is this a nice, serene touch that gives you extra incentive to soak in the pretty landscape, but there is usually something to click on, some point of interest, that will make the man reminisce. For example, clicking on a young couple enjoying a rooftop snuggle at the journey’s outset will recall the day when he, a young man himself at the time, caught the eye of a beautiful young lady at a fireworks celebration many, many years ago. The memory takes the form of a gently-animated image, while the music becomes a bit crackly, as if filtered through an old-time radio set. It’s a lovely moment, really bringing forth the effect of looking back at treasured memories with great fondness, and perhaps a bit of sadness as well.

It’s these vignettes that are at the heart of Old Man’s Journey. As the game begins, all you know is that the old man, living alone in a house by the sea, receives a letter that seems to bear some grave news, causing him to immediately leave home on his journey. As the adventure unfolds, these little moments of reminiscence recount the tale of the old man’s life, beginning with the day he met the love of his life, through their courtship, and then the subsequent events that led to him living a solitary existence. It can be quite touching at times, and is decidedly the game’s biggest takeaway.

At under ninety minutes, Old Man’s Journey is ideally experienced in a single sitting, seeming less a game than a short exploration of love, loss, and hope at the sunset of a man’s life. It doesn’t offer fun in the traditional sense, but more a somber, melancholy experience instead. It is a poignant journey for the player as well, and it left me personally with an impulse to reach out and hug my loved ones. It reminds us of the inevitability of time, of not losing sight of what’s important, and provides a warning against living a life full of regrets. It won’t wow or amuse with its pedestrian gameplay, but it will surely hold value for those who enjoy a brief yet effective pluck at the heart strings.

Old Man’s Journey isn’t so much a game as it is an interpretive tale one can experience, though it does at least hold some emotional value. It’s a bit repetitive, but too short to really become a bother, and may appeal to players looking for a somber tale to while an afternoon away with.

GAME INFO Old Man’s Journey is an adventure game by Broken Rules released in 2017 for Android, iPad, iPhone, Mac, PC, PlayStation 4 and Switch. It has a Stylized art style, presented in 2D or 2.5D and is played in a Third-Person perspective.