continue reading below
»   Home  /  Articles  / Reviews  / Marvel’s Guardians of the Galaxy: The Telltale Series - Episode One: Tangled Up in Blue review

Marvel’s Guardians of the Galaxy: The Telltale Series - Episode One: Tangled Up in Blue review

Marvel’s Guardians of the Galaxy: The Telltale Series - Episode One: Tangled Up in Blue  (2017)

Marvel's Guardians of the Galaxy: The Telltale Series

Marvel's Guardians of the Galaxy: The Telltale Series - Episode Two: Under Pressure

Marvel's Guardians of the Galaxy: The Telltale Series - Episode Three: More than a Feeling

Marvel's Guardians of the Galaxy: The Telltale Series - Episode Four: Who Needs You

With Guardians of the Galaxy Vol. 2 nearly ready to hit the big screen, Telltale Games has jumped the gun with its own slightly-more-interactive take on Marvel’s ragtag band of outlaws-turned-heroes. There are more than a few similarities to its theatrical counterpart, but the game is not directly connected to the film franchise – which is probably a good thing, since movie tie-ins are historically awful. There are plenty of familiar names in the first of five episodes, Tangled Up in Blue, but don’t be surprised to find some different faces (and voices) attached. With a couple rip-roaring fight scenes and an intriguing new superpowered relic to compete for, plus some snarky banter between friends and foes alike, it’s a solid start for the series, though after just a single installment (and therefore not an entirely fair comparison) in some ways it actually feels out-Guardianed by Telltale’s earlier Tales from the Borderlands.

Like the movies, the cast of five unlikely saviours consists of human spaceship captain Peter Quill (who’d prefer to be known as Star-Lord), the green-skinned former female assassin Gamora, the heavily-tattooed behemoth Drax, the furry but feisty don’t-call-him-a-raccoon named Rocket, and the lumbering he-tree Groot. Apparently the license must have cost extra for likenesses, however, so there’s no Chris Pratt, no Zoe Saldana, or even Dave Bautista. The same goes for voices, so while Rocket and Groot look more or less the same as their CG movie models, don’t expect to hear the likes of Bradley Cooper or Vin Diesel this time around. The characters all look and sound just fine on their own once you get used to the difference, so it was probably a wise idea not to attempt vocal impressions.

I was less impressed by what they actually had to say. Writing anti-heroes is a delicate business: make them too likeable and they don’t seem dangerous; make them too hostile and they come off as villains. The first movie (my only frame of reference, as I’m not familiar with the original comic) found the sweet spot through the use of humour. The more they bickered and bitched, the funnier they were, and you couldn’t help but root for them in spite of themselves. The game takes the same approach, just not as successfully. Rocket and Gamora both act like “jerks” at times, while Drax seems overly subdued and not nearly as prone to overly literal interpretations. Everyone’s favourite tree-man is always good for a chuckle, despite his severely limited three-word vocabulary (a hungover Groot is particularly amusing, if nauseatingly gross). Peter, meanwhile, although given the opportunity to make quips under pressure, is essentially the straight man – a little more cocky than he has any right to be, but the most “normal” one of the lot. 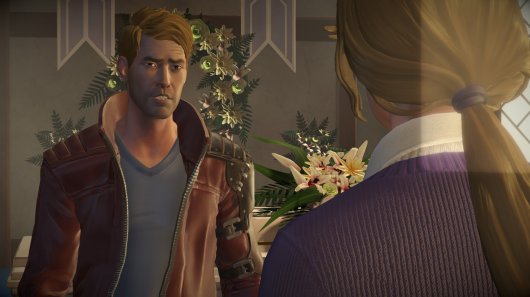 There’s nothing at all wrong with the dialogue; it just doesn’t really zip and zing like we’ve seen first-hand from the Guardians before. That may well develop throughout the course of the series, but for now the group dynamics are decidedly underwhelming, and since the characters supposedly know each other well at the start of the game, there was no narrative reason not to hit the ground running. In fact, they spend a fair chunk of time pondering a break-up and are held together more by circumstance than by a shared bond of affection, however reluctant it may be.

Breaking continuity with the entire Marvel movie universe, the story more or less begins with an epic throw down with Thanos, the destruction-craving big baddie intent on wreaking havoc throughout the galaxy. Here he’s obsessed with the Eternity Forge, an ancient relic of unknown (to us, and the protagonists) power. After a rousing, cooperative battle of scripted Quick Time Events that require no great skill to achieve, it’s the Guardians who find themselves in possession of the surprisingly unassuming trinket, along with another unexpected prize that may well be worth far more in trade.

It’s here that the game’s one and only major choice is made, as you’ll need to decide whether to barter with a shady underworld figure for personal profit, or do the honourable thing and deal with the peacekeeping Nova Corps. I played through both versions, and while they lead to completely separate brief confrontations, the practical differences are minimal, though your choice of alliance promises to have future ramifications. My final choice, however, was to go for the payoff – isn’t that what a self-sustaining band of criminal misfits would really do? Particularly since the argument against it wasn’t “doing the right thing”, but rather that the alternative would be more dangerous. What self-respecting Star-Lord would quail at that prospect?! There were smaller decisions that I opted to legitimately role-play as well. Normally when playing the hero, I’ll opt for the purest, most noble action available. But this time I went a little bit more rogue, except where my crew was involved. You have the option of treating them harshly, but that seemed an inappropriate approach for a ship captain responsible for the welfare of his only real friends. 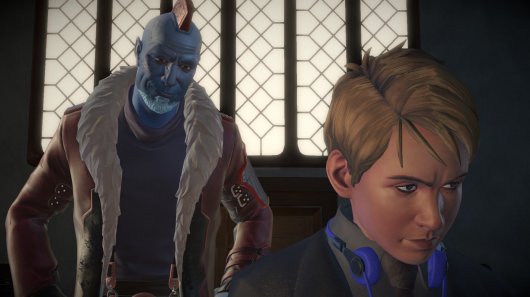 As always with Telltale games, player agency is largely illusory. One choice lets you pick a companion with no real consequence, but regardless of what so-and-so “will remember” about your words and deeds, the story eventually circles back around to the same overall path, if it veers at all. I’m fine with that, so long as I feel the weight of my decisions in the moment. Not only is it a practical impossibility to have a truly branching narrative, I despise repetition just to see the things I missed, especially in a game that refuses to let you skip through cinematics or dialogue. Fortunately, I thought to copy my save file just before this episode’s fateful decision so I could easily jump back and check out the alternative route. I shudder to think of how much I’ll need to replay to see my choice of alliance play out further down the line.

The power of the Eternity Forge takes on more importance when it begins manifesting itself to Peter in the form of playable flashbacks. This adds a nice origin story element that is otherwise limited to short codex blurbs in the ship’s computer about the various players and places involved. But Thanos is not the only one aware of its presence, and before long you’re drawn into a much more perilous encounter with a remnant of the Kree, an alien race thought to be extinct but still very much alive and now eager to extinguish every other race in the galaxy. It’s a great setup for future conflict, giving the series plenty of room to develop, and indeed there are a few surprises in Episode 1 alone.

Most of the mechanics are standard Telltale fare, offering limited control of Peter once in a while, either via keyboard/mouse or gamepad. But there are a few wrinkles this time around. A communications link allows you to talk to your crew when physically separated from them, and a “time scanner” seems to show a trace memory of previous events. Unfortunately, neither has served any tangible purpose thus far, so here’s hoping they’re used to better effect later on. Another new feature is Peter’s ability to hover; you can only do so at predetermined levels, but it’s fun to float around, however briefly. (He also jets around during QTE battles, but that you don’t control.) Any actual “adventuring” is restricted to exploring a handful of self-contained spaces, looking at a small number of objects, and interacting with even fewer. You do need to find and use an item or two in the environment, but since hotspots are automatically highlighted, there’s no challenge even in locating them, let alone figuring out their obvious application. 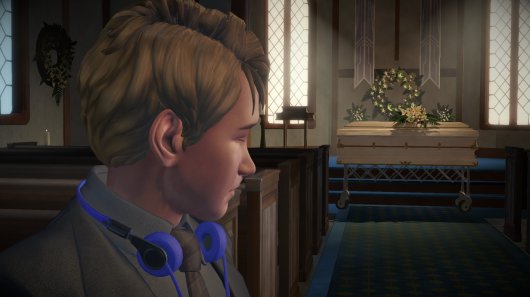 The presentation is classic Telltale as well, with a high degree of cinematic flair and semi-realistic 3D graphics – “realistic” being relative in a galaxy where a mining post is based inside the head of a giant decapitated celestial. It’s a shame, then, that other than a welcome but short sojourn in asteroid-infested outer space and a trip down memory lane to the scenic Colorado mountains, you’ll spend most of your time within drab industrial hangar bays and ship interiors. Much more attention has been paid to the character models, and there’s a nice variety of aliens depicted, although most of them are humanoid (is that word racist?). Voice acting is generally excellent once again, the only exception being young Peter, whose actor sounds like he’s trying to be much younger than he is.

Studio mainstay Jared Emerson-Johnson composes the soundtrack once again, but I’ll admit that I almost never noticed it outside of the up-tempo action scenes. What you can’t help but notice, in all the right ways, are the pop tunes that play periodically. Mix tapes are a staple for Peter, dating back to his childhood relationship with his dying mother, and it’s a great way to inject some nostalgic familiarity into an otherwise out-of-this-world adventure. Even if the likes of E.L.O. and Hall & Oates aren’t your favourite bands, I dare you not to tap your foot to “Livin’ Thing” and “You Make My Dreams” when they begin playing.

Clocking in at a little under two hours, with another half-hour plus to complete the alternate story path from its main branching point, Tangled Up in Blue represents a solid series debut. The usual complaint is par for the Telltale course: namely, there’s not enough player interaction to be completely engaging. It’s also not as funny as the franchise has the potential to be. But once you get past the new faces and voices, it’s a promising sci-fi romp with a couple of intense action set pieces, formidable villains, an ancient relic with compelling ties to an origin story, and the usual slick production values we’ve come to expect. It’s not as good as the first Guardians of the Galaxy movie, but the fate of the interactive franchise appears to be in good hands.

What our readers think of Marvel’s Guardians of the Galaxy: The Telltale Series - Episode One: Tangled Up in Blue