Naysayers who stubbornly refuse to classify video games as works of art should probably spend a few hours with the unapologetically esoteric and visually striking Mr. Shadow, an experience that explores the nightmarish world of a small child tasked with battling the Lord of the Shadows. The game eschews traditional adventure conventions in favor of tossing players into a bizarre world where logic and reason are cast aside in favor of offbeat puzzles that are both fascinating to unravel and frustrating in their design. It's a frequently challenging balancing act that the developers tackle with reckless abandon, resulting in an experience that, at times, tests your patience even while it dazzles you with its incredibly eye-catching artwork and subtle yet striking sound design. It's a relatively short ride, but it's one that sticks with you long after its conclusion.

Players assume the role of a small bald boy who, after his window is popped open by unseen forces, must contend with a devious set of otherworldly traps and puzzles seemingly constructed by Mr. Shadow (aka the Lord of the Shadows), a ghostly figure who guides the child from one scene to the next on a quest to bring light back to the world. The story doesn't strive for anything more complex than that, and it's clear from the onset that the boy must strive against the darkness – as well as the many curious creatures that dwell within it – throughout the experience. Although I completed the game over the course of a frequently interrupted four-hour session, your time will likely vary depending on how quickly you pick up on the game's assortment of quirky puzzles.

The journey unfolds over the course of seven uniquely designed scenes. These scenarios are strongly reminiscent of Sierra On-Line's Gobliiins series, with each self-contained location requiring you to navigate a series of puzzles and roadblocks – some of which require the use of objects scattered around the area – in order to proceed. The first scenario, for example, takes place in the child's bedroom right after Mr. Shadow begins his reign of terror. After magically removing all of the vibrant colors from the kid's adorable bedroom, the titular villain stands aside as the protagonist becomes ensnared by the unnerving shadow of one of his many toys. You then begin the process of unraveling how, exactly, to rescue the boy from his surreal late-night prison. After you've managed to solve this relatively straightforward mystery, the game truly begins to take shape. 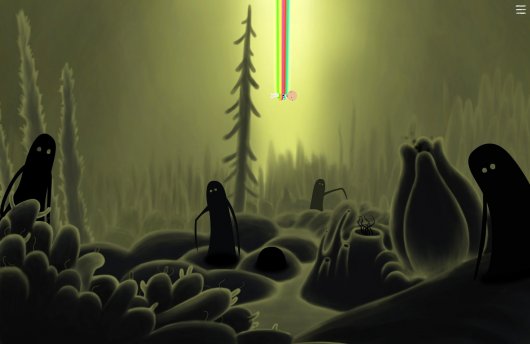 For those seeking a traditional point-and-click adventure game, Mr. Shadow might not scratch that particular itch. Instead of moving the child around the screen, you'll simply click on items to overcome successive obstacles until it's time to move on. While there isn't an inventory to speak of – although there is one exception to that rule later in the game – you'll manipulate a handful of objects (sometimes as the boy himself, sometimes as the unseen player) contained within a particular room; you'll never carry anything over to the next scenario. Some objects will automatically respond to your mouse clicks, but you'll need to move others around the screen in order to figure out their specific usage. One time that might involve pulling the strings of toy monkeys, while another moment requires you to move three-eyed monstrosities between various platforms to release a collection of brightly colored orbs.

Unfortunately, I quickly discovered that it was often unclear what I needed to do next. As a result, I regularly resorted to an unreasonable amount of mindless clicking as I haphazardly attempted to figure out how a sequence should properly unfold. This is where the frustration began to set in, and the experience didn't get much easier to understand as I delved deeper into the game's increasingly nightmarish world. In fact, twice I found myself heading to YouTube in search of a walkthrough just so I could get past certain points where I'd ultimately failed to notice an incredibly small detail, not unlike the often-cited and understandably irritating "pixel hunts" of older, less forgiving classic adventure games. Even when I had the task completely figured out, the fact that I didn't click on the exact spot stopped me dead in my tracks.

During one particularly aggravating moment, I found myself frantically tossing random, nonsensical expletives around the room. And when one of the few available walkthroughs revealed the step I'd missed, I shouted, much to the dismay of my wife, "How was I supposed to figure that out?!" Once again, I'd failed to click a very tiny, very specific section of the picturesque scene, preventing me from bringing the next section to life. There are a few of these moments sprinkled throughout, and for some players it could be a complete and utter deal breaker. For me, however, these moments were unsightly blemishes in an otherwise enjoyable, atmospheric experience. 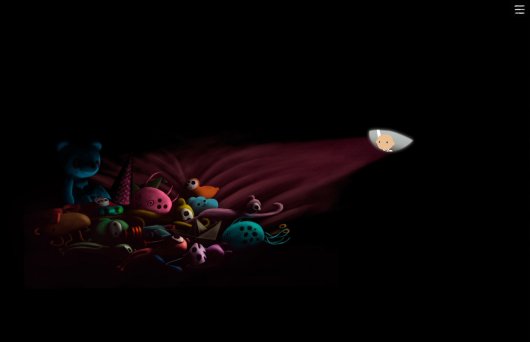 In between the odd unfair roadblock, stringing the puzzles together to rescue the kid from whatever danger he’s facing at the time is oddly satisfying, especially when you figure out the surreal logic behind their design. For instance, using a dart gun unleashes a shadow version of its ammunition, which allows you to solve a puzzle its normal colorful variants cannot. It’s not something that immediately seems rational, but once your mind begins to meld with the game’s extraordinary worlds, a lot of initially nonsensical puzzles make a weird kind of sense. I felt extremely happy when I put everything in its proper place. I didn't completely understand it, but watching it all come together delighted me to no end.

And perhaps that's why I can look past Mr. Shadow's shortcomings. The game is an absolute delight to behold, whether it's tossing you into extremely freakish and vivid hand-drawn scenes or forcing you to navigate areas that resemble something designed by Tim Burton and illustrated by Edward Gorey. From a world inhabited by peculiar bobs and flying transparent curiosities to another populated by unusual glowing platforms and strangely shifting eyes, there is always lots to look at, even though you probably have no idea what you’re supposed to do with it. Like a lot of artwork, trying to interpret the meaning behind the images is one of the challenges. Again, that's all part of the game's charm, though your mileage could vary depending on the strength of your patience.

In addition to its unique artwork, Mr. Shadow sets the mood with its atmospheric sound design, sometimes eerie and sometimes playful. The soundtrack consists of odd effects, an ominous score, and the occasional grunt, groan, or yelp from the young protagonist. A lot of these are contextual: when climbing a ladder in one sequence, the game plays a delightful series of notes, almost begging you to scale them over and over again just to experience that joy before it disappears altogether. There are many bits like this scattered throughout the game, as they don't often repeat later on. When you align a handful of mirrors to send a brilliant ray of light into the air, the associated sounds are for that moment only, making it all the more special. 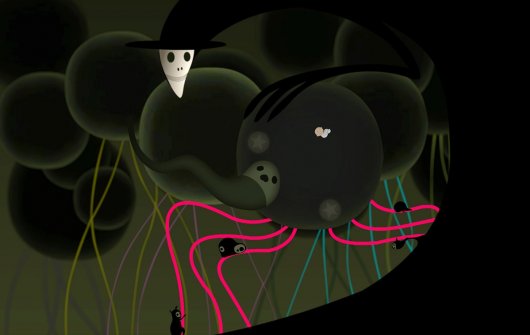 Over the course of my time with the game, I found myself gleefully approaching new sequences as free-standing works of art, each with its own rules, quirks, and tics. To me, they operated as self-contained interactive paintings, little scenes that you can manipulate in order to drive the admittedly vague story to its conclusion. Sure, they're all connected by animated cutscenes that tie everything together, but each one is so different that it feels like a game unto itself.

But here's the million-dollar question: Does Mr. Shadow make enough intuitive sense? Well, not entirely. Some of the "illogical" puzzles do eventually become clear within the context of the game's off-kilter environments and nightmare-fueled playgrounds, but some make you wonder how anyone could design such a diabolical scenario and expect other people to follow the rationale behind it. I'm proud to say that I made it through the entire game having only consulted a walkthrough twice, but I can't truthfully proclaim that I completed every puzzle because I'm some sort of adventure gaming genius. On a handful of occasions, I stumbled blindly into a solution after clicking randomly around the screen for longer than I'd care to admit. 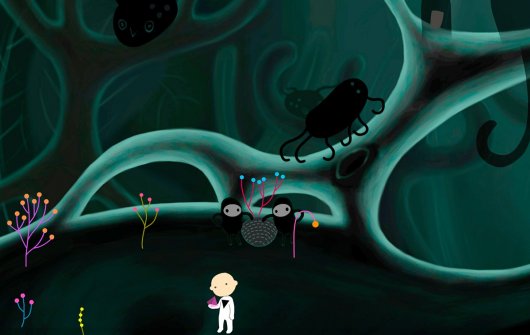 At the end of the day, I have mixed emotions about Mr. Shadow. While I adore the game's art style, its gloomy yet childlike atmosphere, and the contextual sound design, a few too many puzzles really left a bad taste in my mouth. It's not that they're inherently awful, mind you, but the lack of logic, combined with some unforgivable pixel hunting, creates an uneven experience that's difficult to recommend to anyone but the most hardcore adventure gamer. If you're looking for a challenge and don't mind violently removing chunks of your hair as you desperately search for that one tiny piece of the puzzle that you might have missed, it's a rewarding experience. However, those new to the genre probably should start with something less painstaking.

All that said, Mr. Shadow is fun overall, and that, really, is what matters the most in the long run. What's more, it's a remarkable piece of interactive art whose unique design has been implemented in unusual ways. As long as they dial back on the pixel hunting and the way-too-abstract puzzle design, the next project from these developers – assuming the folks behind this release are working on something else – has the potential to refine and expand upon the many promising concepts presented here. In the meantime, I'll gladly return to the Lord of the Shadows' nightmare realms to once again help a certain little boy bring light back to a dark and foreboding world.

Mr. Shadow is a joy to behold with a high degree of challenge, though it stumbles more than once due to some obtuse puzzles and the decision to focus on style over substance.

GAME INFO Mr. Shadow is an adventure game by bycomb released in 2016 for Mac, PC and Linux. It has a Stylized art style, presented in 2D or 2.5D and is played in a Third-Person perspective. You can download Mr. Shadow from: We get a small commission from any game you buy through these links.
The Good:
The Bad:
The Good:
The Bad:

What our readers think of Mr. Shadow